Lunar New Year (LNY) is an extremely special and important time in Chinese culture. Families gather round for bountiful meals, and children anticipate red envelopes filled with cash. In the streets, fire crackers are set off, and festive red and gold decorations complement the lion dances and parades. LNY lasts for the first 15 days of the Chinese lunar calendar, and this year, festivities begin on February 19th. While LNY is filled with fun and games, there is actually a lot of preparation and work done for the holiday.

Before we delve into the fun stuff, let’s take a look at the history behind Lunar New Year. The LNY Lunisolar calendar determines the date of LNY, which falls on the second new moon after the winter solstice. On the Gregorian calendar, which most of the world uses today, LNY falls on a different date each year. According to old Chinese folklore, the New Year tradition started with a mythical beast called Nian, who would come out on the first day of each year and eat crops, livestock, and even people. To prevent Nian from eating everything, the villagers would prepare food and leave it outside of their homes. Later on, they discovered that Nian was scared of firecrackers and the color red, which is why LNY decorations, whether lanterns or spring couplets, are always red. Luckily, in the end, Nian was captured, and we now have two weeks’ worth of festivities.

Out with the Old, In with the New

To start off the new year with a clean slate, the family “sweeps away the bad luck” from the previous year. However, once LNY has begun, all cleaning ceases, for fear of sweeping away prosperity and good luck. Haircuts are also encouraged for the same reasons.

In Chinese culture, red symbolizes good luck. During this time, people will don their houses with red couplets that have Chinese sayings on them. Some will buy new clothing or shoes with the color red on them. It is common to see gold, which symbolizes wealth, paired with red.

Feasting is (Part Of ) the Reason for the Season

During LNY, there are many traditional foods and dishes prepared. The meanings are usually based on the phonetic pronunciations of the foods themselves. For example, oranges, or ju zi in Chinese, are close in sound to the Chinese phrase ji li, which means prosperity. Fish, or yu, is another important food to have at the dinner table during LNY, because it symbolizes the saying, nian nian you yu, which translates to “May there be surpluses year after year.” Growing up, our family ate a lot of dumplings, which hold significance because they resemble yuan bao, or gold nuggets. Dumplings (as pictured below) are filled with savory or sweet fillings and can be cooked many ways. My favorite is pan-fried dipped in soy sauce with scallions. Yums!

Show Me the Money

Once the food coma ensues, children will usually kowtow, or bow their heads and show respect to the elders in the family. This one act earns each kid a red envelope stuffed with money. The red envelope tradition dates back to the Qin Dynasty, when the gift was called ya sui qian, and it was believed that the money would protect the young from sickness and death. Today, because sui actually sounds the same as “age” in Chinese, the name has taken on a different meaning: hopefully, the red envelope will help ward off old age. Of course this was one of my fondest memories of LNY, until I started my first job and quickly became the one bestowing monetary offerings to my little cousins and nephews.

My first LNY experience in Asia, when I was working in Taiwan, was a loud one. Given the fact that firecrackers are illegal in most of the United States, I didn’t realize how significant of a role they have in Chinese culture, especially during New Year celebrations. In the streets, vendors would sell firecrackers, sparklers, rockets, snaps, and more. The loud noises are said to scare the evil spirits away, preventing them from spreading bad luck. 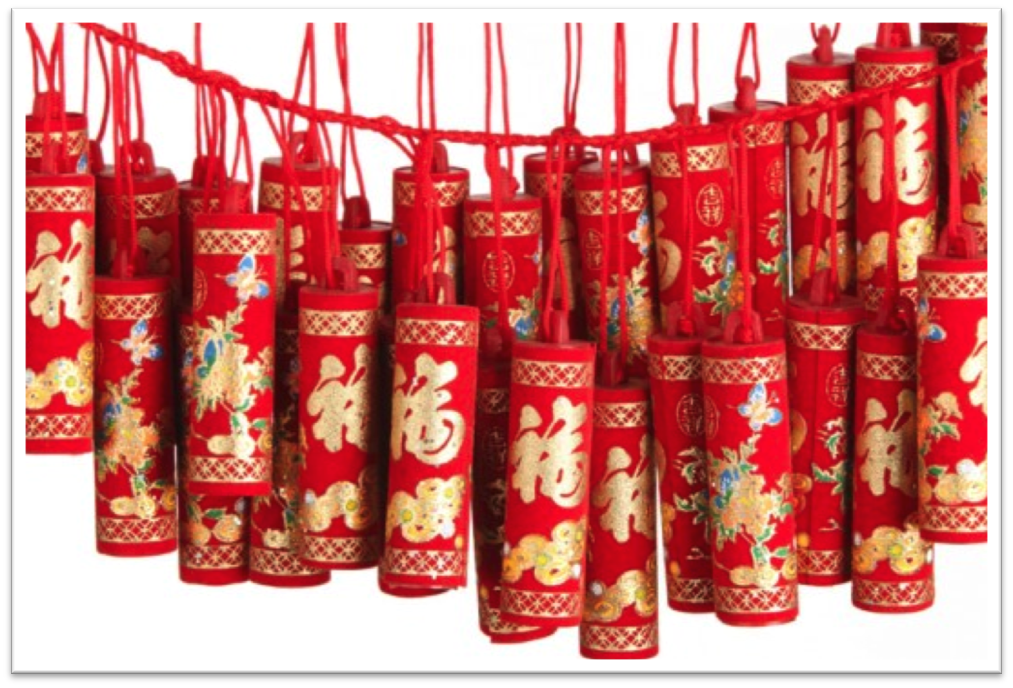 Dancing In the Streets

Aside from firecrackers, it’s typical to see lion and dragon dances as part of parades in the streets. In the United States, San Francisco’s Chinatown has the oldest and largest New Year parade. These dances are usually paired with traditional Chinese drumming. Both the lion and dragon symbolize power and good luck. For me, the lion dance is more entertaining to watch, because the lion has to chase a head of lettuce, which is tied to a red envelope. The dance becomes a spectacular show for the audience if there are tricks performed.

While some traditions and customs differ depending on where you are geographically, my favorite part of LNY is gathering with loved ones. In society today, people are often so busy with their own lives that they forget how to sit down and engage in simple conversation. During this LNY holiday, make sure to take some time to sit back, relax, and make memories with family and friends.