The glucose-inspired design for my mural project in Santo Domingo, Dominican Republic


In this latest blog I will describe my experience working with the community of artists, students, faculty and staff of the Instituto Tecnico Superiore Comunitario (ITSC) in San Luis, a section of Santo Domingo towards the east. 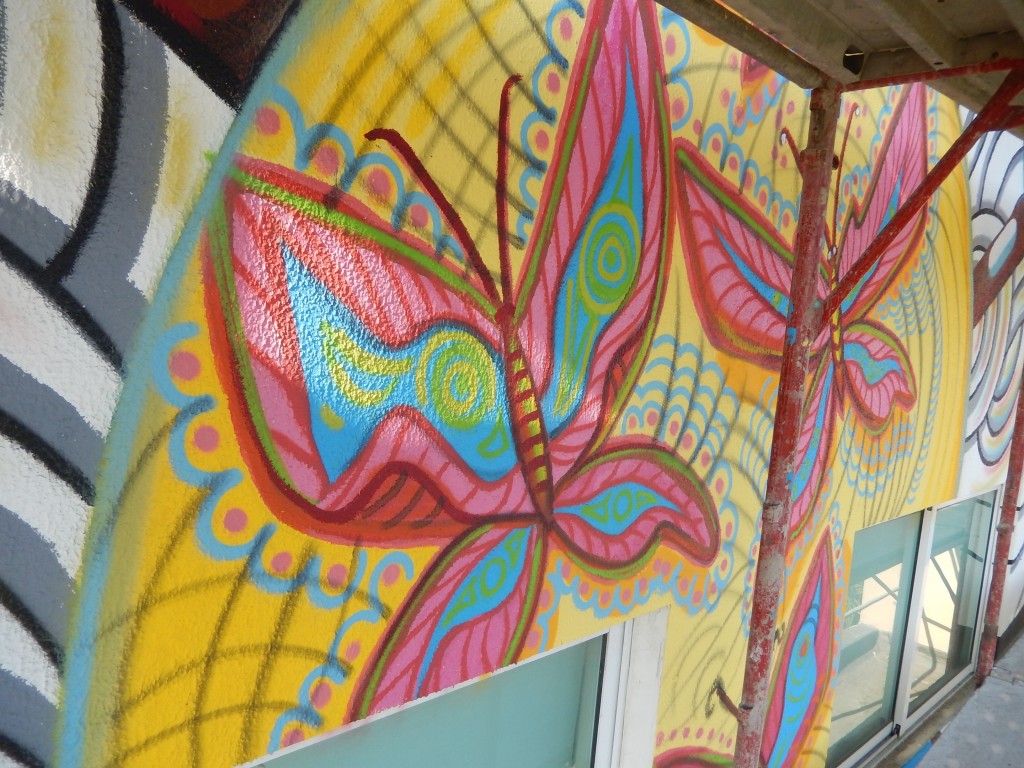 We worked on a wall that was part of the Science building, a four-story surface that faced the highway (carretera). All traffic headed from Santo Domingo towards the eastern part of the island would pass directly in front of the wall. It was where the city became rural; pastures were across the street and cows grazed freely on the grounds in front of the wall. 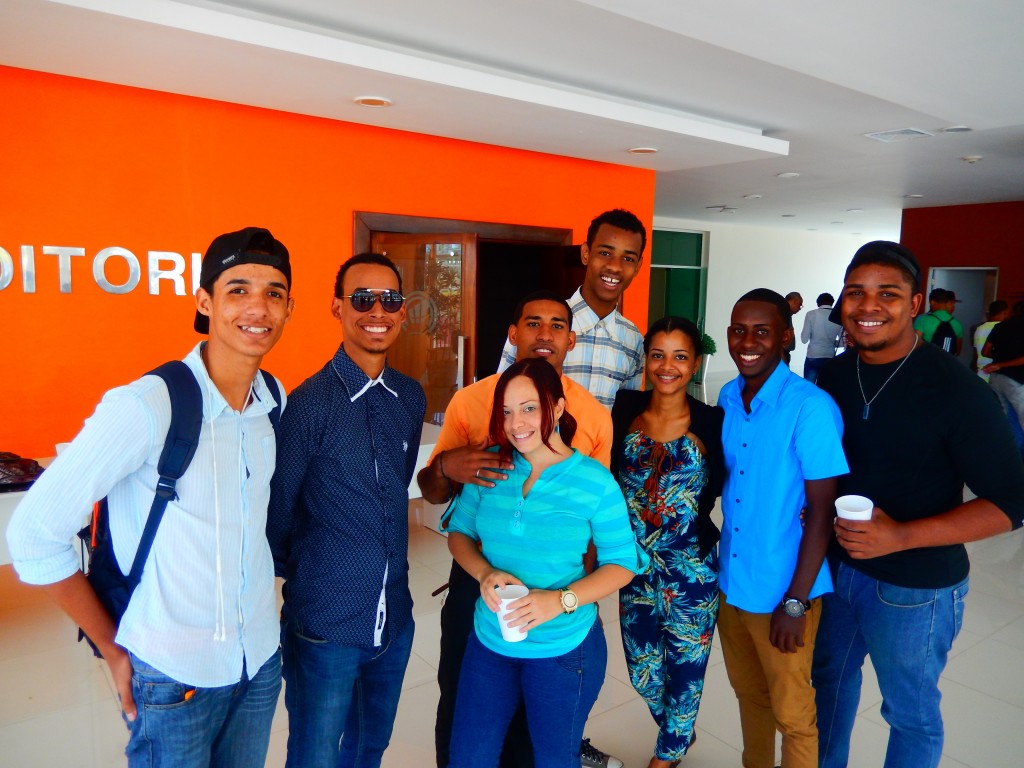 First of all, I was thoroughly impressed by the community college, a mostly two-year program. The facilities were beautiful, extremely well-maintained and very new. The students were serious, driven, and very appreciative and excited at the opportunity to work on this project. The idea was to collaborate with several faculty, artists and students from both the ITSC and the School of Fine Arts in Santo Domingo on a design for the two-part wall. We also worked with the graphic design group, Moda Foca, from Santo Domingo. Due to the wall being divided into two parts, we had to access each side separately; the left side from a ladder and the right by way of scaffolding. Students were required to wear helmets and harnesses, to decrease the risk of injury, and they took great care in respecting the rules. 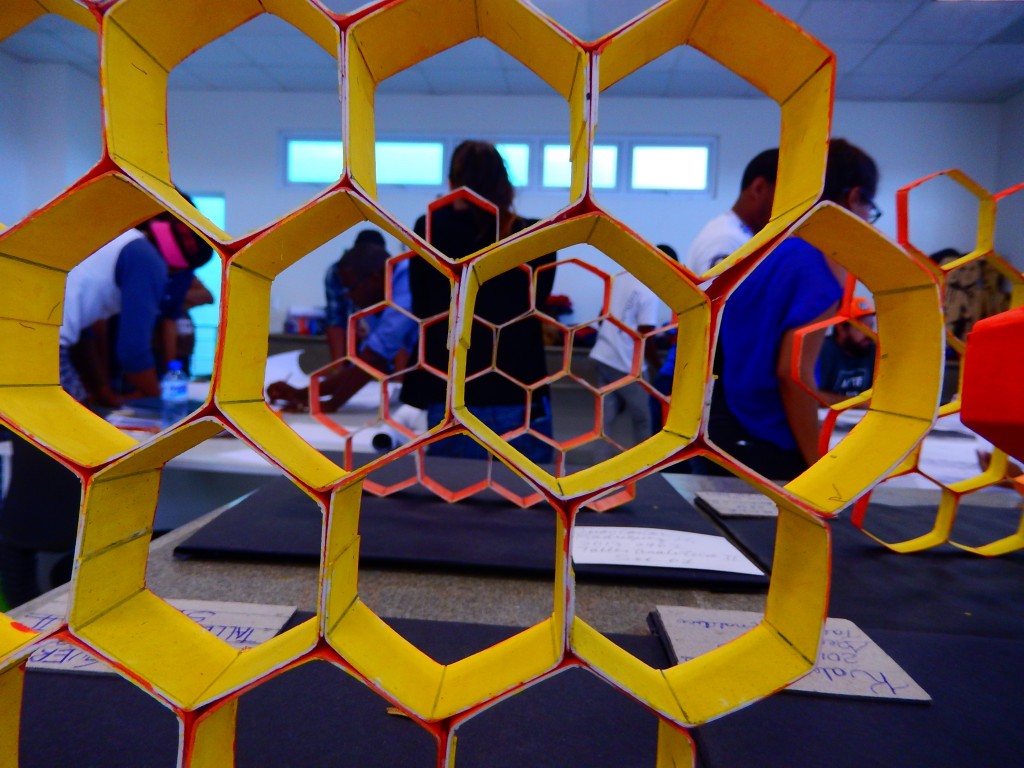 The process started the day I arrived from Santiago. We arrived in the morning, and after a meeting with administration and lunch, the workshop began in the Art room. After a brief introduction, we discussed ideas for the wall among the students, and directly proceeded to draw out ideas.

After a while of independent focused drawing, I split them into four groups of six and had them work together to combine their ideas, to create a sort of conversation of images that told a story through context, juxtaposition, color, and scale. By the end of the day we had 4 large mural drawings; not completely finished, but ideas were laid out to tell a story. Finally the artists presented their drawings to the others. 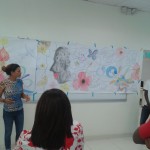 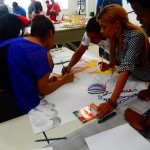 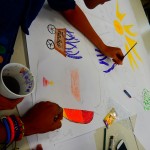 That night I took their drawings and ordered them into a design based on the molecular structure of glucose: the college had been a sugar plantation before it became a school, and many of the students’ families had worked on the farms in the past.

Within each of the bubbles I placed a moment of their drawings: fragments that together told a story of progress and hope. To give a nod towards International Women’s Day, and to honor the leadership of women and mothers in Dominican life, I used an image of a woman’s face from one of the drawings in the forefront of the design. 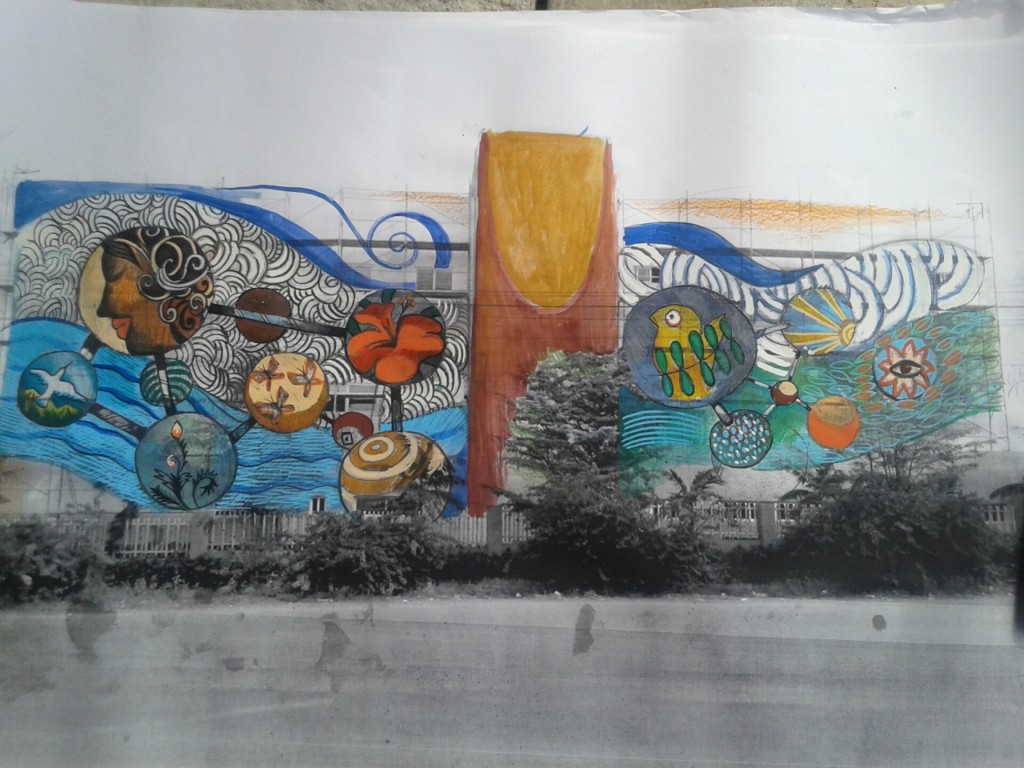 So we commenced to prime the walls and lay out the design. To get a good notion of how the drawing will translate to the architecture, I drew directly on to large-scale copies of the frontal view of the building. This also acted as an aid for my helpers, none of whom had worked on such a scale prior to our current endeavor.

Because it was so arduous to walk entirely around the school to go outside the gates to view the work in progress, we only double-checked on accuracy of scale, placement and drawing once at the end of the day, on our way home, upon leaving the site, I would request that the taxi bring us across the highway to photograph the daily progress so I could study it that night and make whatever adjustments were necessary in the morning. 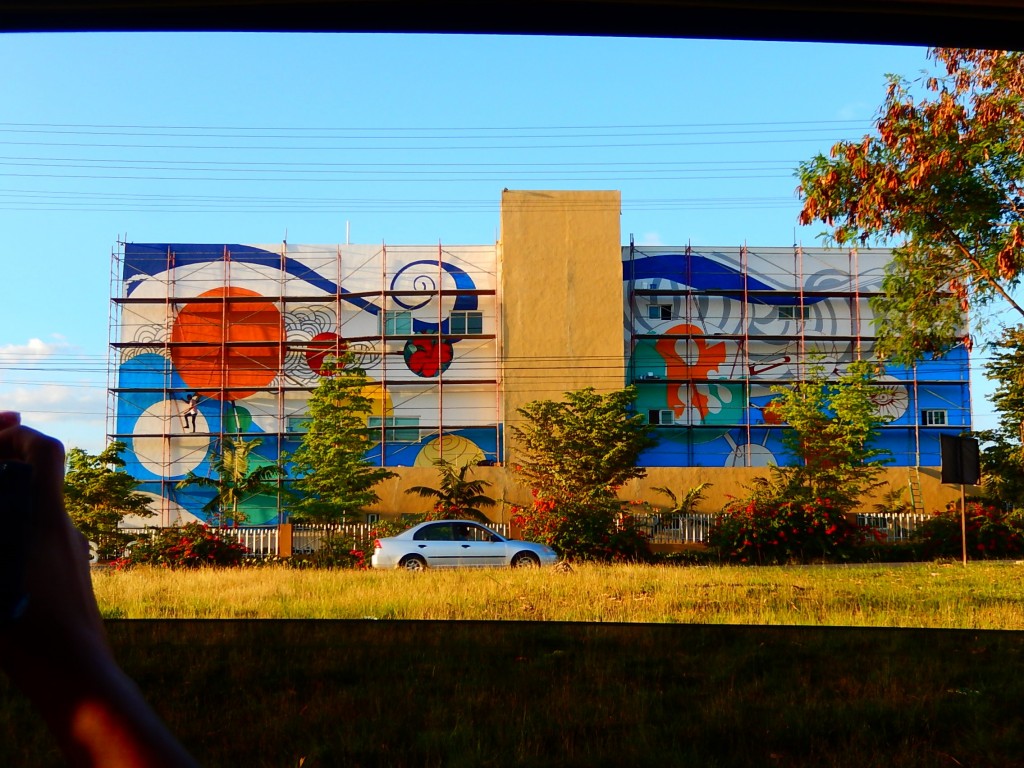 Paints were from Sherwin-Williams, and in addition I brought a round of intensely colored mural paint from Nova Color to supplement the palette. We also purchased a box of Montana aerosol from a local distributor and used this at the end of the process. The spray cans were also critical for speed accuracy and form development in the painting. 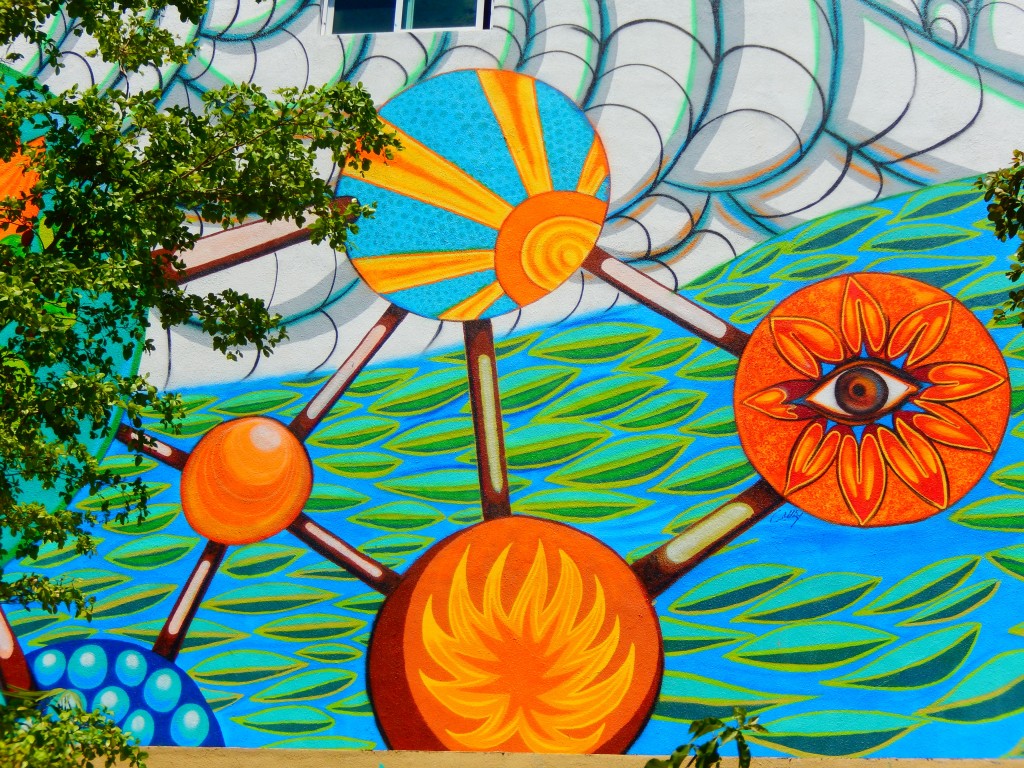 The huge painting slowly began to take shape, in the bright light. Each of the nucleus bubbles contained a portion of the drawings that were developed during the workshop on the first day. 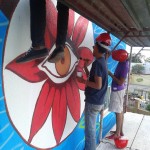 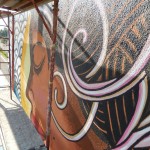 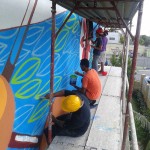 Erickson, one of the more self-motivated and serious artists, developed the rose painting above, with the assistance of some of the other students. He worked diligently on the progression of this moment of the painting, and hosted a party for us all afterwards, in a club where he worked at night. We celebrated the completion of the piece there with a group of the participants. 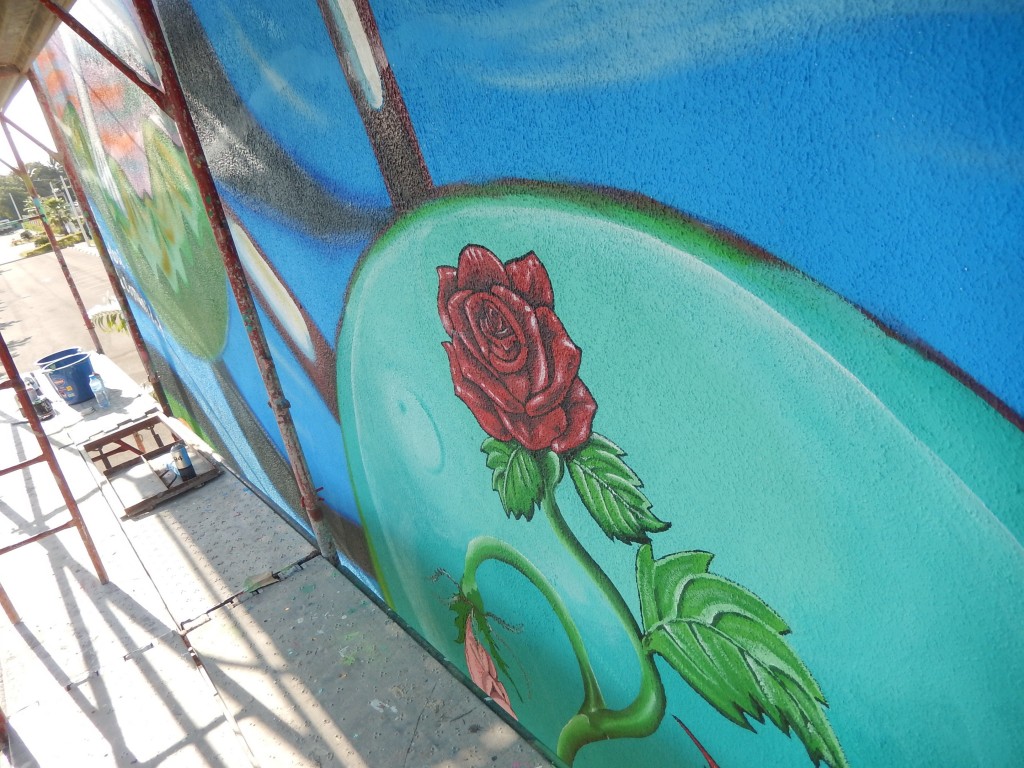 When the students didn’t have other classes, they worked every day and the piece grew in detail over the short week that we worked there. 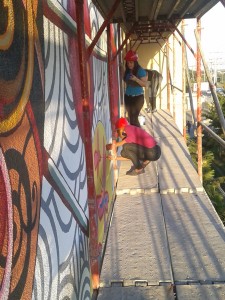 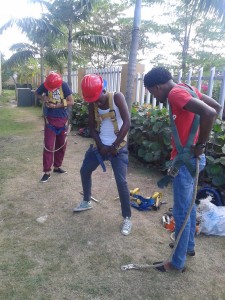 At the completion the staff held a lovely reception, complete with folkloric dances, performances, and a play about Carnaval, made specifically for our dedication. Some of the performers had participated in the design and painting of the mural and it was a very touching moment for me to hear the words that came from the students and the director of the school. The Ambassador came and shared his thoughts with us as a slide show of the work rolled on the screen there. Afterwards we all went out to see the piece without the scaffolding. 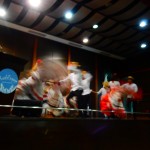 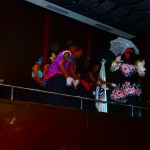 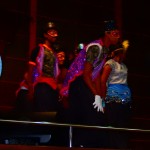 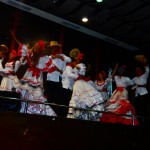 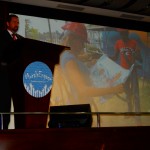 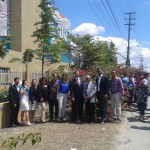 On my last day I was actually able to get to the beach, have fresh fish and soak in the salt water for the afternoon. It was a very successful trip and I made many new friends. One of the collaborators, Omar Morillo, gave me a lovely painting as I was leaving and I invited them all to come and visit me in Philadelphia in the future. I am sure I will meet these great people again. 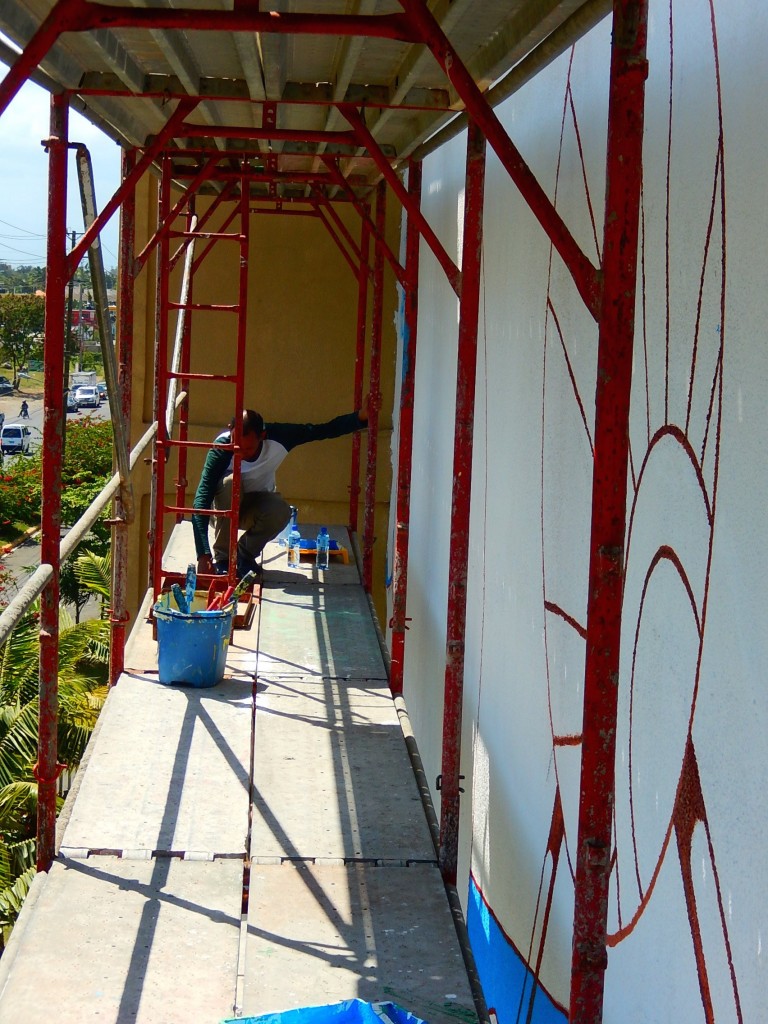 I was able to see Marcello Ferder, who was also artist in residence with me in 1994 at Altos de Chavon in La Romana. At his apartment he surprised me by playing guitar for me and showing me his work in his penthouse apartment and studio. His specialty seemed to be recycling and repurposing and his work is well known in the area. He was also able to attend my talk at the Museum of Contemporary Art in Santo Domingo. 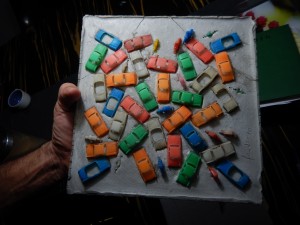 Jorge, a designer from MODA FOCA, joined us as a collaborator. His contribution to the design was in the form of a bird that was very vocal at the time of the birth of his son, only a year ago. 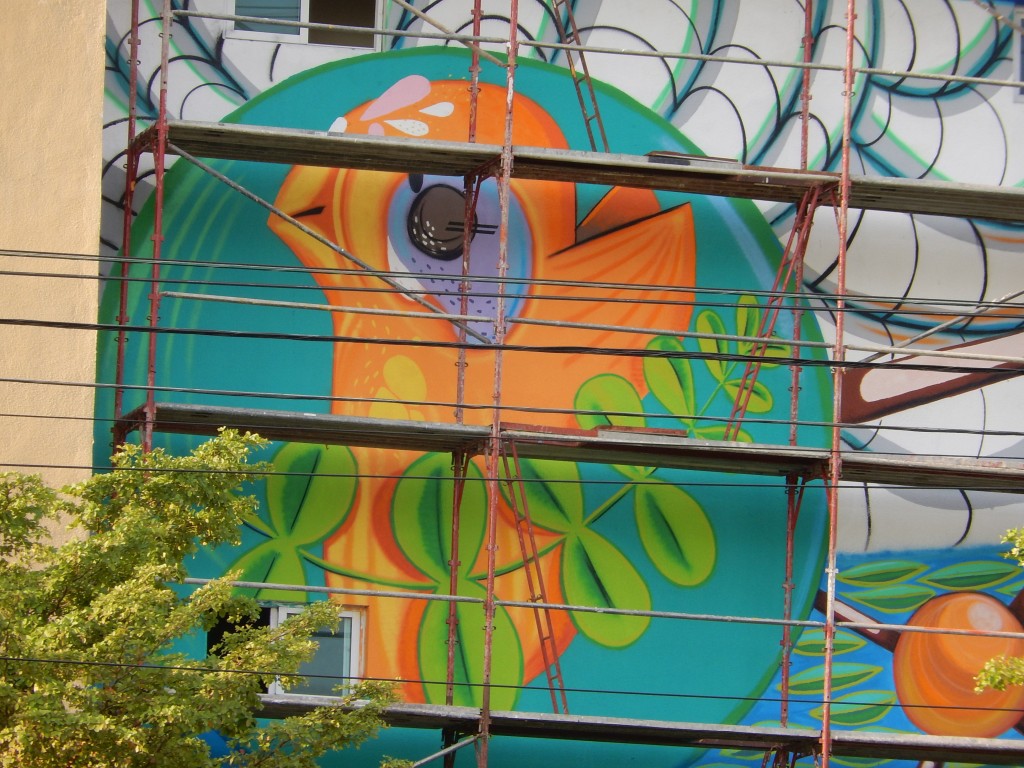 I must also mention Roseric Mercedes, who was integral to the project; present at every stage and helped make it all possible. When we were not working we were able to share some fun moments exploring Santo Domingo. I stayed in the Zona Colonial, a rich heritage site where some buildings dated to the 16th century and the first European settlers in the Americas.

Many thanks to Meridian, the US Embassy, Centro Leon, Triptico 57, MODA FOCA, and all of the great students, teachers and community members that participated in these projects. This project has changed us forever when we realize we can imagine and dream with others, particularly strangers and new friends. During this trip simple moments became amplified, moments that would have gone unnoticed in my “normal” daily life. These experiences change us forever and leave a small mark in the collective quest for hope, peace and understanding. 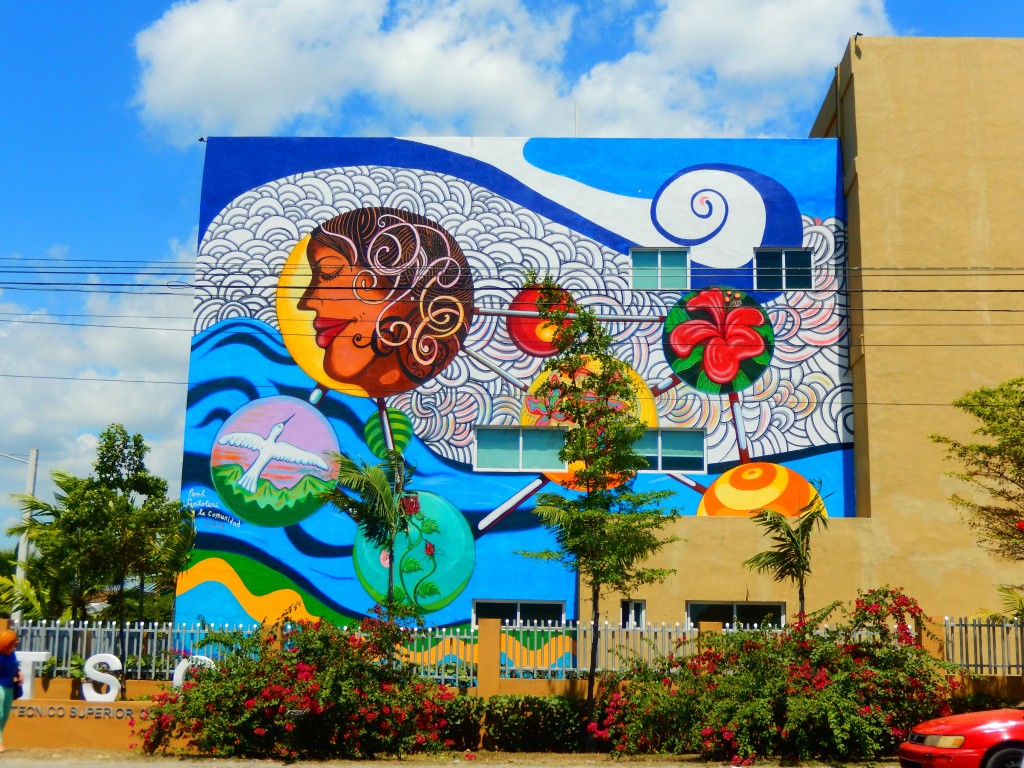 The completed mural, minus the scaffolding. 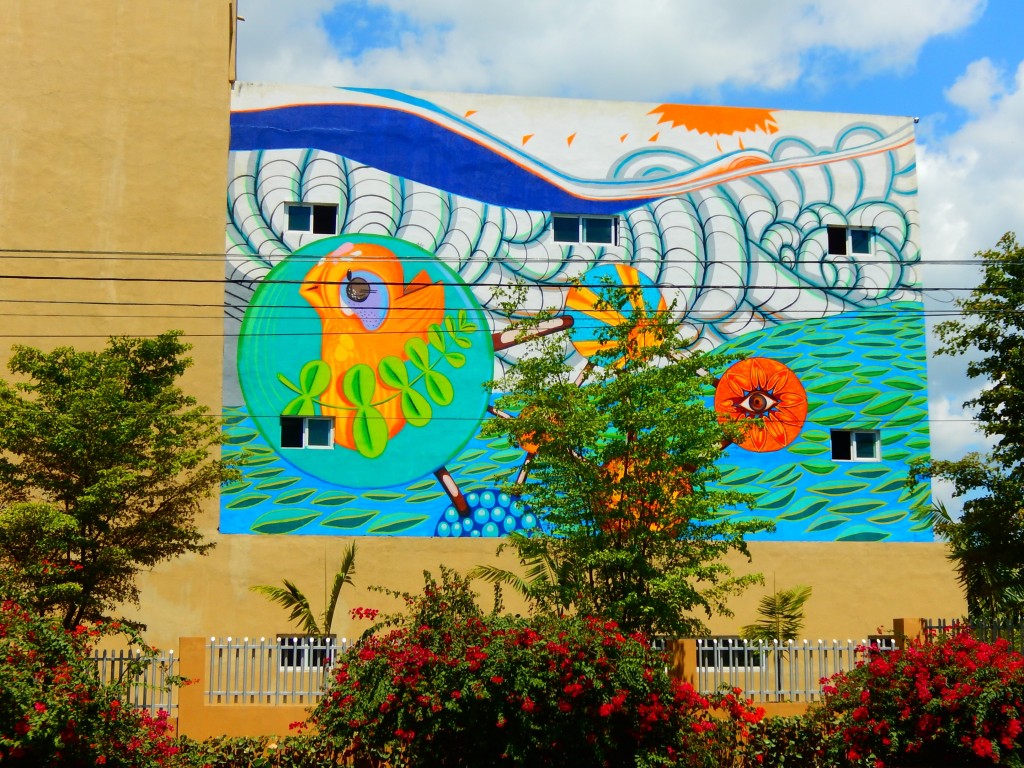