The Rising Leaders Council at Meridian International Center had the pleasure of hosting foreign affairs expert Robert Kaplan for a salon dinner last week while he was in Washington, DC talking about his new book The Return of Marco Polo’s World: War, Strategy, and American Interests in the Twenty-first Century. Having read the book prior to the event and then engaging Kaplan in conversation on stage, I have some thoughts based on my reading of the book.

The Return of Marco Polo’s World is book number 19 by the ever productive and prolific strategist. Kaplan opens readers’ eyes to the new trade, infrastructure and migratory links connecting Europe and Asia into a joint Eurasian landmass. From the South, Kaplan predicts, the big migratory flows seem destined to continue into Europe passing through what the Romans called Mare Nostrum, our sea. Among the most ambitious of these new Eurasian connectors are the Chinese who are striving to create a New Silk Road in the footsteps of Marco Polo, hence the title, but with Chinese characteristics. Meanwhile, the Russians, in smaller scale, are continuing their gas pipe line links through Eurasia. 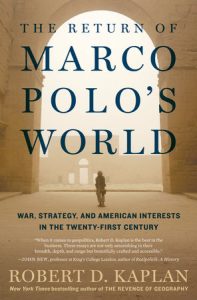 These developments represent a challenge for America’s grand strategy in the 21st Century, which Kaplan defines as American supremacy in the Western hemisphere and securing against a dominant power in the Eastern hemisphere. Preventing such an outcome was the backdrop of earlier global conflicts such as the Second World War. Looming large is China, the only relevant peer competitor to the United States and likely future hegemon in the Eastern hemisphere. The U.S. has, at times, lost sight of this overall strategic objective and used its power needlessly. Undoubtedly, it is also with that strategic backdrop that Kaplan, several times in the book’s articles, underlines his regrets for his initial support for the Iraq War of 2003.

But the book is much more than a foreign policy prediction told through the legend of Marco Polo as the historical backdrop. It is a collection of essays from different periods of Kaplan’s writings. Let me mention the essay titled ‘The Post-Imperial Moment’. Strangely, there might be an element of continuity – however much they are outwardly different – between Obama and Trump’s domestically focused strategy leading to global disengagement. This might be the time to look not at Marco Polo but rather the Romans, specifically when Hadrian built the Wall and the Roman Empire was at its largest geographical extension. Still, Rome’s post-imperial moment was long and almost 300 hundred years more passed before the barbarians were truly at the gates of Rome in 410. The length of the US’ post-imperial moment is still undefined.

Kaplan has always combined strategic thinking with first-hand travel experience. Having lived the last five years in Washington, DC, I was encouraged by his thoughts on becoming a Continentalist. Kaplan did it himself travelling in the footsteps of great explorers as Lewis, Clark and Coronado. The exhortation for all of us DC-swamp dwellers, is to go beyond the Beltway to grasp the roots and historical becoming of the United States of America. With Trump’s election by the forgotten men and women sandwiched by the coastal elites, that exhortation is more relevant than ever.