The following information and answers were submitted by Iliyana Dimitrova, she is an International News Editor at bTV, Bulgaria. She is an incoming Central and Eastern European Journalism Program (CEEJ) Fellow. The CEEJ program was postponed and the fellows will be arriving in the U.S. to begin their fellowship in the spring. Until then they will be participating in a webinar series and will be highlighted through our CEEJ blog post series. Q&A Series with CEEJ Fellows Pt 1: Iliyana Dimitrova 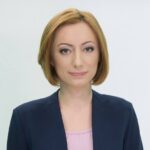 “It will be easy when you know how to do it!”

That was the first piece of advice one of my first teachers in journalism gave me. He was an experienced International News editor in Bulgarian National Television and I was a second-year student. 16 years later, some of my colleagues can say that now I am an experienced International News editor myself. However, the experience is an everyday process that never ends. That is why my biggest professional goal is to never stop learning and improving myself. I have now worked for all the biggest television channels in Bulgaria. Journalism has opened the doors to a range of opportunities where my creativity, writing skills, communication and research skills have proved invaluable. I made my first steps in the profession in 2004 at Bulgarian National Television. There I worked as a reporter and an International News Editor. Prior to joining bTV News, I was an International News editor and anchor in four more private television channels.

My inspiration comes from all the different stories the world offers every day – covering the tense moments around terrorist acts, political processes and tangled diplomacy, but also Red carpet ceremonies and Royal weddings. I like to tell the stories of travelers and adventurers who cross the limits of human abilities. I will never forget my first business trip for bTV News in London, where I was sent to cover the snap elections, but unexpectedly I found myself in the middle of a breaking news event. I happened to make several stories about the most recent terror attack.

I am also the author of four documentaries, in which I show the British capital after the bloody attacks on the doorstep of Brexit and the concerns of Northern Ireland and Ireland about the problematic situation. I was the first journalist from Southeast Europe invited in Westminster palace for an interview with John Bercow, a British politician who served as Speaker of the House of Commons. I also traveled to Estonia to show the “digital capital” of Europe – Tallinn in another documentary. My second business trip to the country was to make a film about the World Cleanup Day 2018. This is a global social action program aimed at combating the global solid waste problem, including the problem of marine debris. The biggest challenge for me is to find the best way to give Bulgarians an understanding of how the rest of the world lives and why it does so. Making foreign news interesting is key.

•          What brought you to the area of journalism, what made you want to become a journalist, is there someone that inspired you?

When I was a high school student, I realized that I am interested in current events and developments. I love meeting people and maintain strong interpersonal relationships and I love asking questions and ‘digging.’ That brought me to the area of journalism. However, at the top of it all was my genuine curiosity.

It has been said that journalism is the backbone of the media industry and is critical to a high functioning society. It follows, then, that we as journalists must have a passion for truth, honesty, and integrity. And must have the guts to go out and get the story. Journalism matters, now more than ever. Good journalism is key to a democratic society. Accurate and timely information creates transparency and gives citizens the information to make decisions that affect their daily life, their communities, their societies and their governments. Being a journalist comes with a sense of responsibility to provide the truth to the public.

•          What is your primary challenge as a journalist in your country?

As a journalist, there’s a public-service dimension to my work, so I must strive to maintain high ethical standards. Accurately reporting the facts, remaining impartial, and staying committed to the truth is essential for high journalism standards.

I often work in a fast-paced, rapidly changing environment, so I need to stay energetic to keep ahead of the news. Having a passion for current affairs and reporting drives me throughout the busy days as I do research, conduct interviews, check sources, and follow up on leads. As a journalist, I need to deal with controversial issues attracting disagreement, criticism, or even just strong feelings.

•          What is your current understanding of freedom of the press or what does it look like in your country?

Bulgaria remains 111th among 180 countries in the media freedom report of the Reporters Without Borders non-governmental organization. It’s the lowest media freedom score among EU member states and the countries in Southeast Europe. In Europe, only Belarus and Russia score lower. Collusion between media, politicians and oligarchs is widespread in Bulgaria. At the heart of much of this pressure is money. Generally speaking, nobody is going to arrest you if you do journalism in Bulgaria, but what they will do is leave you jobless. There are different tools for control by the government. For example, the public television in Bulgaria is financed mainly through a state subsidy, which is voted by the parliament every year in the law on the state budget.

“Let your eyes see and your hands touch”, says a popular Bulgarian proverb. I’ve never been to the United States but during my career, I’ve covered a lot of issues happening there. That’s why I’m more than curious to see the things I write about with my own eyes. I’m also eager to explore the media industry in the U.S. and learn how journalism develops in the world’s biggest media market. I want to learn the best practices and meet professionals and ordinary Americans who can help me in my work and my understanding of the world processes. And above all, I want to experience the United States, to taste and feel it and to have my own personal understanding when I make future reports about the country.

As I said, I have never visited the U.S., so my first impressions came from books, documentaries, films and news that I am reading, collecting, fact-checking and producing every day. The U.S. and its values used to be a good example of what other countries could be and have. These are things such as a high level of personal freedom and responsibility, a just court system and democracy.

I’ve always believed the only thing that will make a good journalist better is practice and deep-seated curiosity. That’s why this fellowship is a great opportunity for me to enrich my knowledge not only about the United States but also about people coming from many other different countries. As a team worker, I’m adapting rapidly to changes, I’m always ready for a new challenge, I love to travel and I’m constantly willing to learn new skills and share mine with others.