Eva on a panel at an event.


The following information and answers were submitted by Eva Frantová . She is an economic reporter for Slovak daily newspaper Pravda and also for Forbes Slovakia. Eva is an incoming Central and Eastern European Journalism Program (CEEJ) Fellow. The CEEJ program was postponed and the fellows will be arriving in the U.S. to begin their fellowship in the spring. Until then they will be participating in a webinar series and will be highlighted through a CEEJ blog post series. Q&A Series with CEEJ Fellows Pt 6: Eva Frantová 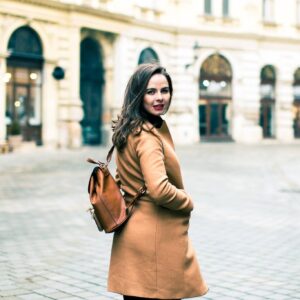 My passion for journalism has started really early and has accompanied my throughout my life ever since. As a student, I worked for a school magazine and over the time I became its editor-in-chief. I have studied economics in English and German at the University of Economics in Bratislava, completing three ERASMUS exchange programmes over my Master and Bachelor studies followed by an internship in Spain and student working programme in the USA. The whole time, I have been working for the News Agency of the Slovak Republic. After coming back home I started to work as a reporter in the oldest Slovak daily newspaper Pravda, and also for Forbes Slovakia. Last year, I took part in the journalist fellowship in Germany, working as a correspondent for my daily, and also for the German newspaper Die Welt. Currently, I am working as an economic reporter since February 2020.

Most of the time, I am covering feminist topics (such as gender pay gap, the feminization of the poverty), ecology (anything announced by the Ministry of Environment or any news concerning climate change and laws introduced by the European Union in this case) and also the management of the Euro funds. There are many reasons why I focus on exactly these three areas. As a woman, I feel it is my duty to raise awareness about the ongoing unfair conditions of women in society, especially when it comes to working conditions. Furthermore, the climate is something that concerns all of us even though we do not realize it most of the time. I grew into a person highly worried about the way of life most of us are living and would love to change at least a bit about it through my articles. And last but not least, my interest in the European Union and the distribution of its financial support to the member states, has developed during the period I, as a young journalist, spent studying or working abroad supported mostly by different European bursaries.

I was inclined towards writing since I was a little girl. In high school, I wrote for the school magazine and over time I became its editor-in-chief. The fact that we won many competitions and were proclaimed to be the best school magazine in Slovakia three times in a row, has paved my path to journalism. I even earned money to survive on my many Erasmus semesters as a web editor for the News Agency and after returning back to Slovakia, there was no other occupation I would rather have.

If the arguments used by a reporter in their articles are truthful and supported by facts, he/she can change the opinion of the masses. And now, in times of conspiracy and disinformation, I feel it is more important than ever to do so.

To raise awareness about certain topics that either do not get enough attention even though they are highly important, or are frequently distorted by so-called specialists using the power of the internet.

For me, it means I can do my job without being concerned about what might have happened to me, my family and my loved ones if I publish certain articles that can be of someone’s dislike. I have never had a feeling of being threatened but I cannot say it is the case for every journalist in Slovakia. The most famous case of crucial injustice is one of an investigative journalist in Slovakia, Jan Kuciak. He, together with his fiancée Martina Kusnirova, was murdered two years ago. It is certain that their murder is related to Kuciak’s articles. Until now, nobody has been sentenced for his murder. However, the fact that this could happen in Slovakia, has awakened the whole society, led to the fall of the government and many other replacements either in the police, judiciary or prosecution office.

I have experienced a similar experience from a previous internship. However, only within the borders of Europe. I spent two months in Germany, working for their daily newspaper Die Welt, meeting other journalists from Eastern and Central Europe. This fellowship has brought me many new contacts and ideas on how to work on my topics and which ones to cover. I expect something similar from my time in the U.S.

I have previously spent 4 months in the U.S. As a student, I took part in the USA Work and Travel Programme and spent my summer in Boston. So, I could say that I already have some idea of what life across the pond looks like. However, there is always more to see and experience.

I would be more than satisfied, if, after those almost two months, I will gain new journalistic contacts from different countries, new ideas on how to choose and write my topics and last but not least, more courage, because for a journalist, there is never enough of this quality.