Diplomacy has changed significantly in the last 20 years, and it is destined for further transformation in the years ahead. This is because today’s global challenges are more transnational in nature, requiring countries to think more broadly about coalition building – and outside the lanes of traditional diplomacy.

My father served in the United States foreign service beginning in the late 1950s when the ultimate diplomatic aspiration was to become a political officer. This coveted position was tasked with writing prescient cables predicting geopolitical developments within a particular country – with the goal of positioning the United States to achieve its foreign policy objectives. This political section was one of three core functions – political, economic and consular – of a U.S. embassy based in another country’s capital.

At that time, thematic discussions on global health or the environment, for example, were viewed as tangential to the principal activities of our embassies. This was still largely the case decades later. I remember meeting with the late Secretary Colin Powell to go over his foreign policy priorities while I was working for President George W. Bush in the White House. Secretary Powell pointed to the organizational chart section marked “regional bureaus” and told me these were the most important functions, as they were the traditional drivers of bilateral relationships and oversaw the work of our ambassadors in the field. The thematic “functional bureaus”, which historically took a back seat in on policy making, began to grow in importance as the issues and challenges involved ever larger numbers of countries.

Now, as the world faces multiple crises, bilateral diplomacy remains critical but thematic diplomacy is ascendant – and the United States needs to remain a leader in this global transition. While great power rivalries still figure largely in our foreign policy, issues such as public health, climate, cyber security, counterterrorism, and the U.S. relationship with multilateral institutions are on the front burner.

Today’s U.S. Department of State is equipped to manage emerging thematic issues through its thematic bureaus, like Oceans and International Environmental and Scientific Affairs; Democracy, Human Rights, and Labor; and Population, Refugees, and Migration. Over the years, State Department has added public diplomacy officers, agricultural attachés and foreign assistance specialists to the diplomatic ranks, along with a science attaché or two at some larger U.S. embassies. The most recent creation of special positions like climate envoy, currently occupied by former Secretary John Kerry, is another indication of thematic diplomacy’s ascendance.

As we approach 2022, it is not just the State Department that has a greater understanding of the role of thematic diplomacy. The private sector is also discovering that adopting international policies to advance thematic goals which simultaneously help society and strengthen markets ultimately help the corporate bottom line. This movement is currently dominated by environmental, social, and governance (or “ESG”) matters, which are rapidly emerging as central functions of a company in much the same way as marketing or finance has been. This will be particularly evident as the U.S. Securities and Exchange Commission pursues adoption of new guidance around corporate ESG standards.

It is important to recognize ESG issues like thematic diplomacy: they are not limited by borders. Rather, both companies and countries must cooperate on these big, complex issues which affect every community, nation and region as well as our planet. 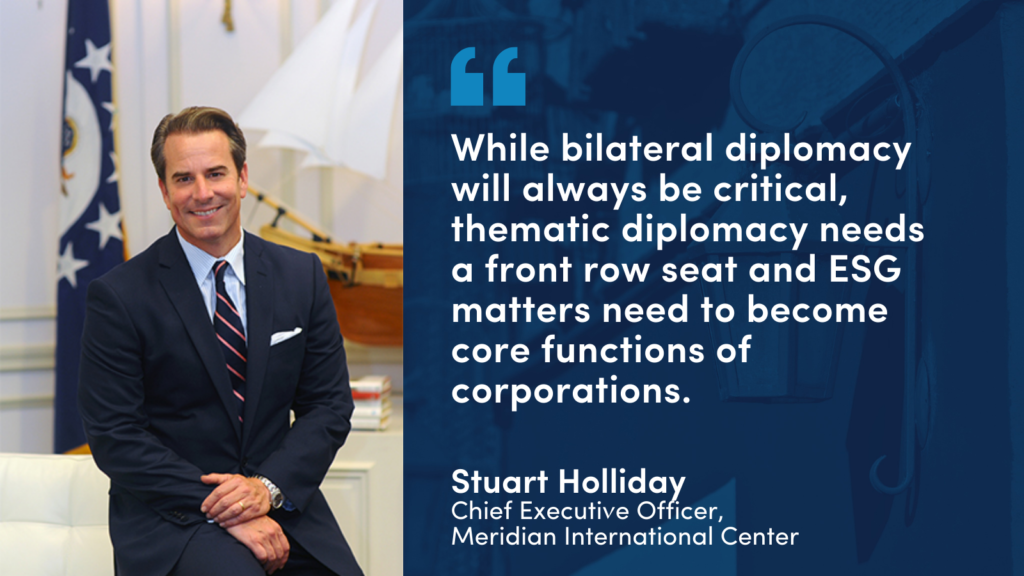 In the future it will not be enough for government to advance thematic diplomacy objectives alone. The private sector will need to be part of the solutions to these global challenges in much the same way as during the COVID-19 pandemic. This also means our diplomats must be equipped with the skills, industry knowledge and relationships necessary to be at the cutting edge of science, medicine, energy, the environment in addition to the critical need to mitigate the risk of the proliferation of weapons of mass destruction.

This heightened urgency for public-private cooperation on emerging global issues is why we chose to focus on the nexus of ESG matters and diplomacy at our annual Global Leadership Summit on October 22. We believe this international collaboration will require new thinking, new networks, and a renewed sense of commitment to the power of U.S. leadership in the development of global relationships to advance progress on these important issues.

Just as the United States helped lead and shape the development of the post-World War II institutions that governed international political and economic dialogue, we must now broaden the tent and include actors from all areas to build coalitions for action. While bilateral diplomacy will always be critical, thematic diplomacy needs a front row seat and ESG matters need to become core functions of corporations.

It is my hope that American diplomats and private sector leaders will forge the way to strengthen international cooperation on these critical issues and help shape the rules of thematic diplomacy for years to come. Imagine the positive impact we could make for people and the planet if we harnessed the power of both companies and diplomats in the service of the common good.