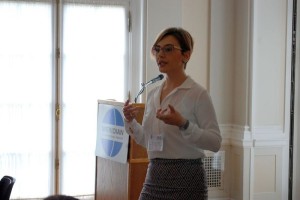 This blog post was written by the YTILI fellow: Blagica Petreski, Macedonia CEO of Finance Think- Economic Research and Policy Institute, Skopje- Macedonia   To be selected as a Young Transatlantic Innovative Leaders Initiative (YTILI) fellow is an honor; to participate is a challenge. I had a dream to be a part of the US fellowship programs; I have a dream to improve my society. When I was nominated by the US Embassy in Macedonia as an YTILI fellow, dozens of butterflies appeared in my stomach. At the same time, I was a bit scared. Why me? Could I leave work for a month and be so far from my family? What will it be like to be at the same program as peers of developed countries? Those were just some of the questions that appeared on my mind. The first of June, the start of the program, had come and … I missed the flight….. 04.30 a.m Macedonian time. 09.30 p.m US time. I could not wait for the next day or postpone the start of the program, so I decided to buy a new ticket on my own. It was the worth every penny.

42 young entrepreneurs at the same time, in the same room. It is like a bomb of ideas mixed with positive energy and appetite for more. I have never seen so many smart people in one place at once; there was so much creativity in the room. The happiness and passion floated in the air. Every one of us is different, but at the same time identical. All speak the same language: “the language of entrepreneurs.” It is the passion for our work. The Assistant Secretary of State for European and Eurasian Affairs at the United States Department of State, Ms. Victoria Nuland, encouraged us YTILI fellows to be “global economic agents of change.” In addition, for one of her answers to a question about why the US State Department invested in us, she just reminded us of how powerful the network of youth entrepreneurs is: “we invited you because you have the power to change society – you are the future.” So now we have the chance to prove it. The need of young, open-minded people has grown. Speaking from a Balkans country’s viewpoint, we couldn’t say we maintained nurtured and developed bilateral relations. The YTILI network confirmed the opposite. From the first day of the program, the Balkan countries’ representatives (including myself) clustered in a smaller group, speaking ex-Yugoslav language, discussing about the problems and challenges and breaking the stereotypes for Greek-Macedonian, Serbian-Kosovo tensions, etc. It was one of the greatest moments, realizing that by being “independent but united,” we could improve our societies and the region. 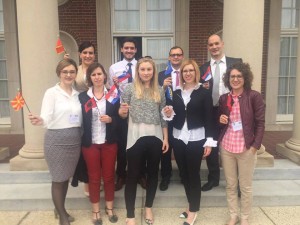 Personally, the YTILI program challenged me to improve my self-confidence, as well to expand my knowledge in economic policy design. As a guest of the Center for Tax and Budget Accountability (CTBA) in Chicago, IL, I had the chance to attended the “Illinois: Vision for the future” event. The former Governor Jim Edgard and the Congresswomen Robin Kelly discussed relevant policies and gaps. The main messages and lessons of the event were that, “the major role of the government is to help people” and “we’re not here to play politics, we’re here to solve the problem.” Several other events on policy creation were on the agenda within the visit. So, the YTILI program gave us more than leadership skills — it provided opportunities, network, expansion of our creativities and innovation, and also encouraged us to be risk-takers and not to be afraid of failure. Within the Google panel, Mr. Vint Cerf, “the father of the internet,” spoke about successes and failures with a powerful message: “failure is not a sin.” 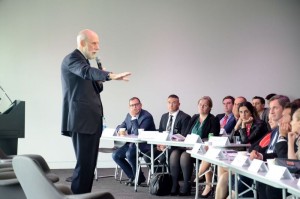 I love entrepreneurship because it is pure, smart, full of creativity, ideas, clever solutions, and rich with open-minded people. Are young entrepreneurs the driving force and future of developing countries? I don’t just think they are — I know they are. The YTILI program was my “once in a lifetime chance,” a personal journey that encouraged me to become stronger leader with the vision for better economic policies.