The First Amendment of the United States Constitution


It is abundantly clear the maintenance of a free press is inherently tied to the well-being of the American republic. Globally speaking, the ability of journalists throughout the world to act as unbiased watchdogs is absolutely crucial to the well-being of democracy moving forward in the twenty-first century. It is not coincidental that some of the most repressive and tyrannical regimes in our history played host to severely limited press sectors. Simply put, the freedom of a nation’s press is directly related to the capability of liberty and transparency to flourish within that state. In recent decades, we have seen seismic shifts in the modus operandi of journalism. The transformation from print to digital media has given birth to a twenty-four hour news media cycle that heavily influences policy, decision-making and public opinion.

In celebration of International Press Freedom Day, I would like to expand upon how we, at Meridian, enable journalists from all over the globe to perform their jobs to the best of their abilities. It is forever in our best interest to support journalists’ efforts to unearth hidden facts, expose wrongdoing and initiate the free flow of dialogue. After all, as Walter Lippmann, the Father of American Journalism stated: “the function of news is to signalize an event, the function of truth is to bring to light the hidden facts, to set them in relation with each other, and make a picture of reality on which men can act.”

In an effort to further promote the power of journalism, Meridian was fortunate to host six German journalists to cover the ongoing TTIP negotiations. I had the privilege of working on this program very recently. The trip was especially powerful because the journalists were able to cover the ninth rounds of TTIP negotiations in New York City. Beyond the meetings with Capitol Hill, think-tank and state government representatives, our journalists were able to see the sausage-making that occurs behind closed doors during trade agreement negotiations. 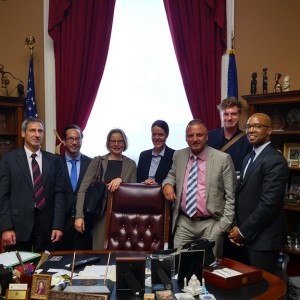 One of Meridian’s explicit and more grandiose goals is to increase global understanding. This program provided a perfect example of how to increase understanding between the citizens of two nations in the midst of a monumental trade agreement. 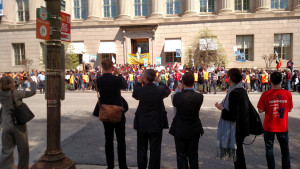 Our TTIP journalists ran into a bevy of protestors in Washington, DC.

Last September, I also had the privilege to work on a journalist tour for three young media members; this time from neighboring Austria. This tour focused on the transformation of media away from traditional print to digital platforms– mainly social media. British author Matt Kennard recently sat down with Vice News UK to discuss the state of the twenty-first news media. Much of the following was consistently echoed by the press outlets and journalists themselves.

“What you’re seeing is a massive shift of power to people. For two centuries, the upper class has owned the means of production, so they’ve owned newspapers and the printing press and all the things you need to project your views to society on a mass scale. But now with the advent of the internet, there’s many more ways to circumvent what has become a really stale and old world system. People don’t need establishment newspapers in the same way to get what we’re told is the truth, they’ll look at websites or their favorite citizen reporters.”

On a visit to the newborn United States, French political thinker and historian Alexander Tocqueville admired the American devotion to the liberal free press: “in countries where the doctrine of the sovereignty of the people ostensibly prevails, the censorship of the press is not only dangerous, but absurd…The sovereignty of the people and the liberty of the press are therefore regarded as correlative, just as the censorship of the press and universal suffrage are two things which are irreconcilably opposed…Not a single individual that of the millions who inhabit the United States has as yet dared to propose any restrictions on the liberty of the press.” It is my hope international visitors continue to admire our utmost dedication to the free press, just as Tocqueville did centuries ago. Meridian looks forward to hosting programs focusing on the inherent qualities of the American free press and the continued evolution of media in the twenty-first century.