On October 14, 2017 Meridian International Center and the U.S. Department of State opened an International Visitor Leadership Program (IVLP) with six participants from Cambodia. These staff members of the Tuol Sleng Genocide Museum had arrived in Washington, DC for a professional program on museum curation and the intellectual approach to memorializing history’s darkest moments. Only a few months later, the project takes on new meaning after William Heidt, the U.S. Ambassador to Cambodia, announced a $55,500 donation from the American embassy to the Tuol Sleng Genocide Museum. 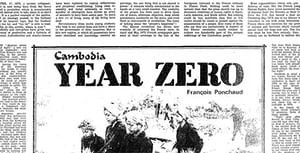 “Our greatest glory is not in never falling, but in rising every time we fall.” – Confucius

In 1975, the Khmer Rouge came to power, and their leader, Pol Pot, sought to establish an agrarian utopia through a hybrid of Maoist and Leninist tenets of communism. The human costs of these actions were devastating. To accomplish his utopian vision, Pol Pot targeted doctors, teachers, journalists, monks, artists, and anyone who had attained higher education or held minority status. He emptied the cities of Cambodia into labor camps where physical abuse, disease, exhaustion, and starvation became an everyday reality. In total, it is estimated that between 1.7 and 2 million Cambodians died during the Khmer Rouge regime as the result of his and his followers’ actions.

At the IVLP project opening at Meridian, the visitors sat down with Mr. Nate Thayer, award winning investigative journalist and the only western journalist to interview Pol Pot. In soft tones, he described how Pol Pot denied orchestrating a genocide until the moment he died, and how the Khmer Rouge acted with a brutality he never completely captured with the written word. He then revealed that he still had 40 hours of unreleased audio footage of his interview with the director of Tuol Sleng Prison, which would later become the Tuol Sleng Genocide Museum. As a key deputy of Pol Pot, the director was personally responsible for the deaths of at least 20,000 Cambodians. At the request of one of the participant’s, the museum’s director, Mr. Visoth Chhay, Mr. Thayer agreed to digitize the footage and send it to the museum for their records.

Another moving experience occurred while viewing the U.S. Holocaust Museum’s “Special Exhibit on Cambodia,” which museum staff held open for an extra day so the IVLP visitors could view it. Each of the six visitors, as well as the two Khmer language interpreters, lost family and friends in the Khmer Rouge. Themes of justice and reconciliation within the exhibit displayed the underlying tension between those in Cambodia who would like to prosecute Cambodian genocidaires via the tribunal formed in 2003 in contrast with those who prefer forms of reconciliation focused on national unity and forgiveness.

The tension over how to remember contested historical events remains a difficult conversation in the United States as well. In particular, the debate over the placement of Confederate monuments and artifacts in today’s society has weighed heavily on Americans. To help visitors understand these national tensions, and to emphasize the value of two-way exchange, the IVLP group traveled to Montgomery, Alabama, a city that was formerly the capital of the Confederacy and later a battleground for the 1960s civil rights movement. There, the visitors had an opportunity to meet with the Equal Justice Initiative (EJI). This organization has mounted an ambitious project entitled the National Memorial for Peace and Justice with the express aim to memorialize the 4,000 victims of lynching and race-based violence in the United States between 1877 and 1960. The IVLP participants met with staff from EJI to discuss the difficulty of memorializing the remnants of slavery and racism, knowing that for many the history is viewed in an entirely different light—much like the Tuol Sleng Museum and its efforts to preserve the history of the Khmer Rouge regime—a period many would prefer to forget.

Upon the conclusion of their IVLP Director Visoth Chhay and his staff returned to Cambodia. Little did they know that on December 8, 2017, U.S. Ambassador William Heidt would announce a donation from the embassy to the museum totaling  $55,500 dollars for the preservation of the clothes and textile products worn by victims of the Khmer Rouge in the Killing Fields. The Ambassador stated the Embassy’s desire to assist Mr. Chhay and his staff in their work and mentioned that the completion of their IVLP in October factored into the embassy’s decision. This donation is particularly timely, as clothing and textiles from the Khmer Rouge are over 30 years old, and without intervention they will begin to degrade. Now, those who visit the Tuol Sleng Genocide Museum will see the sweat stains on shirts, the miles worn upon the shoes, and the flecks of blood that once ran through the Killing Fields.

Special thanks to Jessie Brunner of the HANDA Center for Human Rights and International Justice at Stanford University. Special thanks also goes to Ms. Nazgul Toktosunova and Ms. Caitlin Bettendorf of the Office of International Affairs, State Department’s Bureau of Educational and Cultural Affairs. Additional thanks goes to the hardworking interpreters on this project, Ms. Evelynna Shelly and Mr. Rattana Pok.