Murrow participants from Africa work with a University of Minnesota student to make banners for the Gophers game that afternoon. Photo by Cynthia Norcross Willson


The world has never needed truth more than it does today, Secretary of State John Kerry remarked to a group of journalists earlier this month. His remarks came in early November 2016 at the beginning of the U.S. Department of State’s Edward R. Murrow Program for Journalists, a 3-week professional exchange for journalists from around the world. Journalists are our truth-tellers and purveyors of nuance in a world becoming increasingly polarized. 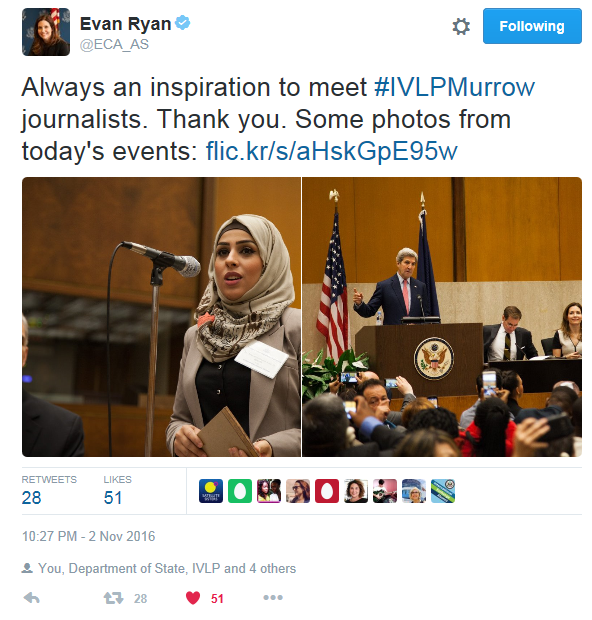 This year marked the 11th anniversary of the Edward R. Murrow Program. Ninety journalists from 75 countries met with their American counterparts to learn about best practices in reporting, the role of media in a democracy, and the impact of the latest technology on new media. This year’s participants explored the theme of new and traditional media in the digital age. With a network of more than 1,000 alumni across the globe, the Murrow program is an innovative public-private partnership among the U.S. Department of State, the Poynter Institute, and several top U.S. journalism schools. Meridian International Center was privileged to administer all seven of the regional subgroups within the 2016 Murrow program.

The experience added to the seasoned journalists’ existing skill sets, but the more profound outcome of this year’s program was tangible, measurable shifts in opinions towards the U.S. As journalists, the participants naturally sought out conversation with Americans to get their views on world affairs, the elections, and the journalists’ respective countries. Many times they were surprised by the results of these discussions.

For Iraqi war correspondent Ms. Aseel Al Rikabi, the Murrow Program was her first experience in the United States and served to dispel numerous myths. In Iraq, Al Rikabi said they were told that Americans are “machines that would hardly smile.” She explained that Iraqi society views both the U.S. government and its people as adversaries and is challenged to separate views of American people from opinions of government’s foreign policies. Now, she says, “My opinion of the U.S. people has changed completely.”

A participant from Egypt noted, “Everything is orderly here. Even the beggars ask in nice way. I had a misperception that there is racism here. But people learned my name is Mohamed and they treated me in a dignified way, even in other parts of the country. They gave me gifts and boxes of dessert or fruit, ‘Have a safe trip; we are your friends from Florida.’ And I had only met them for a few minutes!”

This view was consistent among participants from other regions as well. Participants from Seychelles and Botswana admired the civil liberties U.S. citizens enjoy. These liberties are upheld, they noticed, even during contentious political times. All Murrow participants observed elections, and some reported back to their home country publications on their observations. “The U.S. has its own fine tuning moments,” Nigerian visitor Onimise Adaba commented.

Though world opinion of the U.S. remains largely positive especially in Europe and Asia, negative perceptions of the U.S. persist, especially in the Middle East. This makes the results of the Edward R. Murrow Program all the more important. Freedom of the press allowed participants to see the U.S. as it is, “warts and all”, as the program’s namesake promoted. In three weeks, journalists from around the world developed a nuanced, more positive understanding of the U.S. and its people. We hope that through seeing each other’s “warts” along with the good, we can create the foundation for cooperation and mutual understanding. By simply telling the truth, journalists can make this a reality. 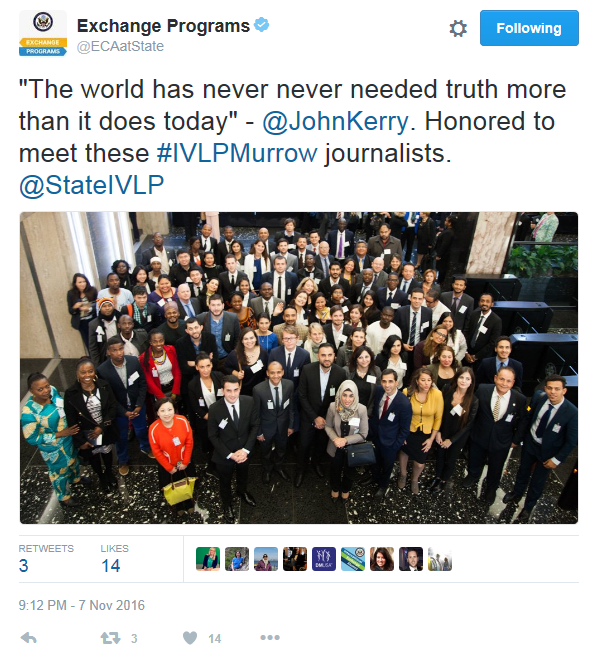