I apologize for the delay in my update, I found out the hard way that I can’t plug my laptop charger into the electric outlets in Seoul (who knew?). But first, I’m the guy on the left; the other two gentlemen are Gab Cheol Ji, and Senator Angus King. But, more on that in a bit.

So how did I end up in a hotel room in Seoul, South Korea, blogging about hanging out with Senators and my electric incompetence? It all stems from a great year, made possible by the University of Maine and the Political Science Department. In the fall 2014, I was accepted to be a part of the Peter Madigan ’81 Congressional Internship Program , which placed me in a paid internship in Senator Angus King Jr.’s office for the spring semester while enjoying full-time status as a student. To put it simply, it was the most exciting five months of my life. I learned more about the political process in the first month of my internship that I had ever known. It was an incredible semester, and I had a lot of fun.

While the internship opened up many doors for me, the most exciting one to date is the 2015 U.S. Congress – Republic of Korea National Assembly Exchange Program. The program is collaboration between the U.S. State Department and the Republic of Korea (ROK) National Assembly, which is sponsored by the U.S. Congress and administered by the Meridian International Center. Since 1981, the program has brought 10 former U.S. Congressional interns and 10 South Korean students together for several weeks in each country. This year, the two delegations spent the week in Washington, DC together before they split apart; the Koreans visiting Chicago, Illinois and Little Rock, Arkansas and the Americans visiting Seoul and Ulsan, South Korea.

On the first day, we were assigned a “counterpart,” who we would do all of the week’s activities with and tour Washington, DC with. My counterpart is Gab Cheol Ji, who is from the outskirts of Busan, on the southern part of the Korean Peninsula. Gab (pronounced “cab”) has just finished his two years of mandatory military service as a tank driver, and is excited to start his college career this fall. Along with the others in the group, we saw much of what D.C. had to offer, and had a lot of fun doing it.

One of the more high-profile parts of the program was the “one-day internship” for our Korean counterparts in a U.S. Congressional office. For Gab, this meant a day in Senator Angus King Jr.’s office, as he was so nice as to sponsor me for this program. While most of the Korean delegation was only able to take a tour of the Capitol and attend a few briefings, Senator King and his staff really made it an excellent day for both of us. Gab and I were able to meet with senior staff from the office to discuss how the Senate works, the role of the staff, and how the office itself operates. After that, we were even able to job-shadow the Senator! It was an extremely rare opportunity that allowed us to attend a live radio interview, watch him talk to newspaper reporters about foreign policy, and even have a private meeting with the Senator in the U.S. Capitol! Gab had a lot of fun and learned about the U.S. Congress on a level that few are able to, which was highly rewarding for the both of us. 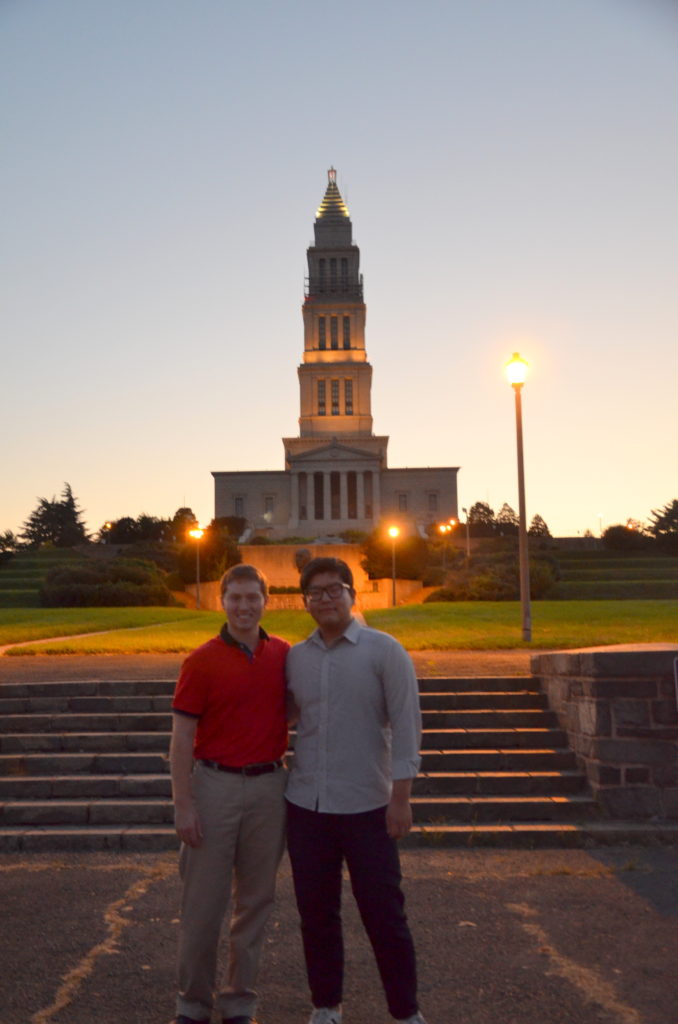 While in Washington, DC we also attended many formal briefings, including those held by CSIS, Brookings, The Heritage Foundation, along with other presentations and visits to government agencies such as the Department of State. While these were highly informative as to the nature of the U.S-ROK alliance, I actually learned more through my Korean counterparts. The fun talks that we had as a group after the day’s activities were done opened my eyes to a new culture. The topics varied from the different types of food in each country to the proper way to greet a person, and everything in between. We went to the Capitol Mall, rode bikes around Washington, DC, walked around the historic waterfront, and even attended a Major League Baseball game. The time spent together taught us not only incredible amounts of factual information, but to appreciate and admire other cultures on a new level. The Korean delegation excited us for the next part of the journey, two weeks in South Korea.

Now that I have the electric outlets in Soul figured out, I will be sure to keep you all posted on my adventures on the Korean Peninsula, including a potential trip to the D.M.Z. But first, I should take care of this jet lag!

Until next time UMaine,