Hey Everyone! It was a very exciting final week of the 2015 U.S. Congress – Republic of Korea National Assembly Exchange Program, and I have more stories than I could possibly put in a single blog post. I am in Chicago right now for a quick layover; so far I’ve taken a two-hour flight from Seoul to Tokyo, had a three-hour layover, and then hopped on a 12-hour flight from Tokyo to Chicago. I still have a two-hour flight back to Bangor, and then a two-hour drive back to the glorious town of Calais, Maine.  For those keeping score at this point, yes, it is a very long day; my trip will be over 28 hours. All in one day, thanks to the international date line.  The good news: the Chicago airport has real coffee, a taste of home compared to the Americano that is exclusively served in South Korea. Other than the grueling trip across thirteen time zones and awful airline food, I’ve had quite an exciting week. We had a presentation on foreign aid policy at the Korean International Cooperation agency (KOICA), watched horse gymnastics at the Korean Folk Village, and visited Samsung Electronics.

One part of the program that had a deep impact was our visit to the Korean War Memorial in Seoul. My grandfather, Harold Clark Sr., fought in the war as an infantryman. While he told the family very little, it was clear that he had seen heavy action during the war. It was not until several years after he passed away that I found a Silver Star medal that he had won, and subsequently thrown in a closet, never to speak of it again. This was the reason I took this trip; to understand the conflict, and to meet the people that he and others in the free world sacrificed so much to protect. After this week, I feel that I’ve found the answer.

The most interesting parts of the trip were actually the hardest to write about. As it turns out, the North Korean government has a fairly extensive Internet presence; due to the extreme sensitive nature of the sites that we were taken to, my blog posts needed to be cleaned of anything that could have somebody thrown into a North Korean concentration camp. Seriously. On Wednesday, we went to a place called Hanawon Resettlement Center. Hanawon is a government facility with top-level security protocols similar to those for a nuclear facility. What kind of site would need that kind of security? As it turns out, Hanawon is a government-run resettlement facility for defectors from North Korea. While I cannot discuss exactly what the facility does, I can say that it is meant to educate North Koreans so that they can more easily integrate in the competitive South Korean society. Hearing their stories of leaving North Korea and the extreme hardships that they endured so they could have a better life was a very powerful experience. As Americans, we tend to take our freedom for granted; Hanawon showed me exactly how lucky we are, and will stick with me for the rest of my life. 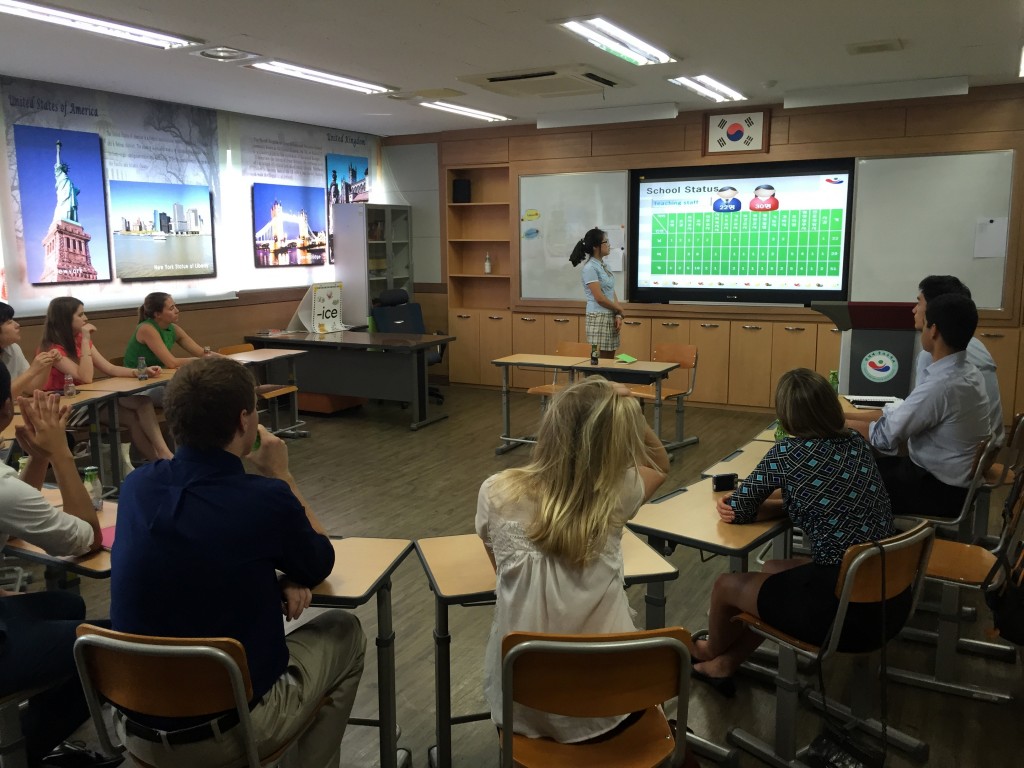 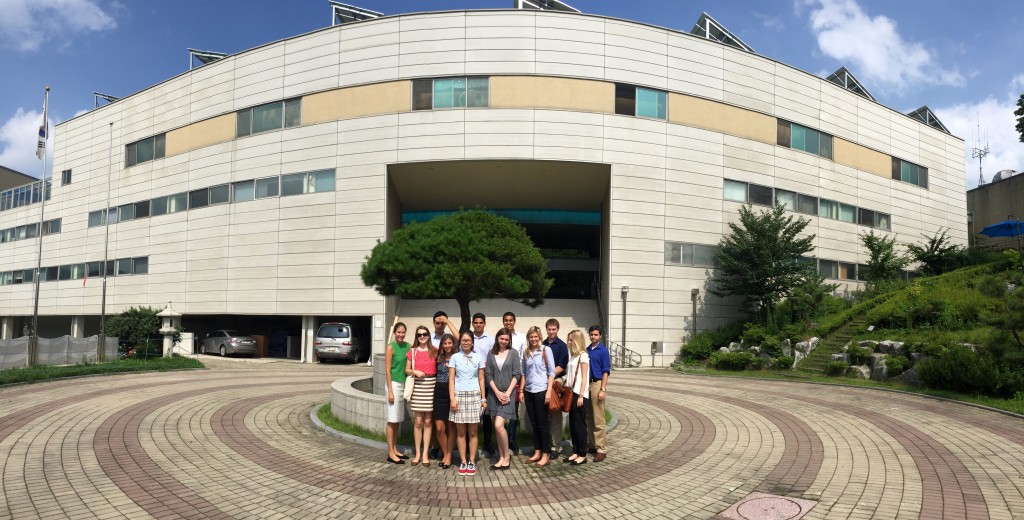 Participants in front of the main building at the high school for North Korean refugees.On Friday we finally took the road trip that we had all been waiting for, to the Demilitarized Zone, or DMZ. The DMZ is a four-kilometer strip of land that separates the two Koreas, is the most heavily militarized (and mined) border in the world. To get there, we first had to cross into the Joint Security Area, or JSA. The JSA is behind the DMZ and serves as addition barrier between North and South, and provides the first line of defense against an attack from North Korea. The militarization there is astonishing; everywhere you looked there was a machine gun emplacement, tank trap, or troop barracks. After a driving for a few miles through the JSA, we finally got to an observation post, which was on a hill overlooking North Korea. 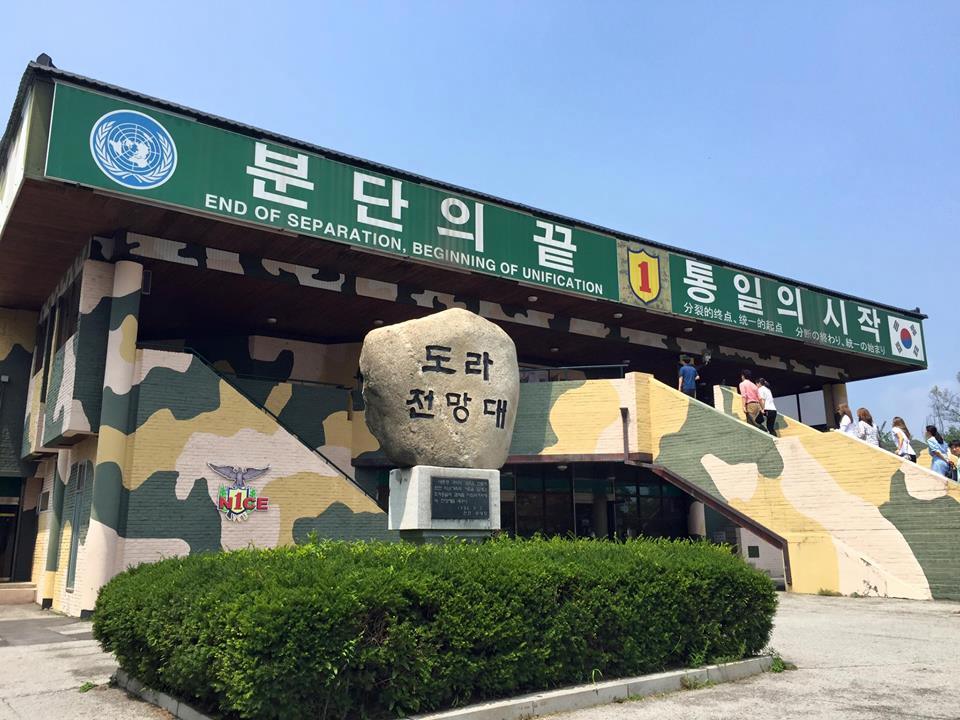 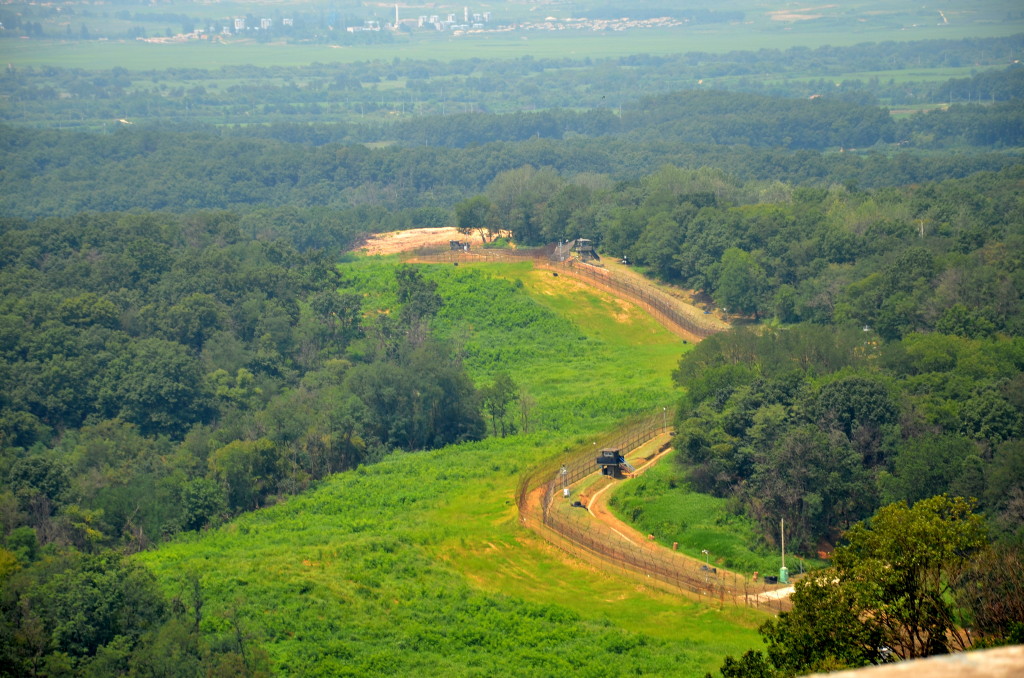 The DMZ is the world’s most heavily militarized boarder.The differences in the two Koreas were astonishing. While the South Korean side and the DMZ were both heavily forested, I could not see any major tree growth on the North Korean side. Even looking through my binoculars at the mountains across the border, I could only see trees clumped at North Korean artillery emplacements, in an ironic attempt to hide them from the U.N. Command.

After we finished our time at the observation post, we went to Panmunjom. Panmunjom, or the Truce Village, is a military emplacement on the borderline, where the two sides negotiate. There is a concrete line that runs through he village; one side controlled by the North Korean Military, and the other side controlled by the United Nations Command. Though we had armed security, the situation was still fairly dangerous; due to several shootings and firefights between the two sides, we had to follow strict instructions throughout our visit. One of the peculiarities of the DMZ lies in how the buildings are split up; there are five buildings that are split in half by the borderline.   So, how do two warring countries share a building? Well, they don’t. As it turns out, they divided up control of the buildings, with the North controlling some and the South controlling the rest. This allowed me to enter North Korea, and take the best conversation-starter of a selfie that I will ever have.

After we got back to Seoul, we had one last free day to explore the city. Along with my awesome counterpart, Gab Cheol, I was able to go to a great open-air market, see a beautiful palace from the Joseon Dynasty, and even sip on tea at a traditional teahouse. We then met up with the rest of the group, and said one last goodbye over a Korean tradition, karaoke! While it was difficult to say goodbye to the wonderful people that I had met in Korea, I can honestly say that it will not be the last time that I will be on the Korean Peninsula. This trip has been a profound experience, and has allowed me to learn about Korea (and the U.S.) in a way that is only possible by seeing it firsthand. I look forward to bringing my experiences home with me, and hopefully inspiring others to study the ROK-U.S. alliance. What I look forward to more, however, is going back; I’ll see you at the 2018 Winter Olympics, Korea! On that note, it’s last call to board for my flight back to Maine.