YTILI group picture in the garden at Meridian International Center


As a fresh new intern at Meridian International Center, I was privileged to be assigned work on the 2016 Young Transatlantic Innovation Leaders Initiative (YTILI) sponsored by the US State Department. The most rewarding part of the hectic planning and preparations for the YTILI program was having the chance to interact face to face with 45 accomplished, driven and diverse entrepreneurs from 41 European countries. These participants came from all nations across Europe, with places ranging from Turkey to Iceland. Seeing the foreign sounding names on an Excel spreadsheet transform into 45 live individuals with diverse stories, backgrounds, and heritages was truly incredible. While many of the participants had had previous experiences traveling to the United States, for many, it was a first time visiting the United States and what better place to start a trip across the US than Washington D.C.?

(YTILI Fellows at the US State Department with Victoria Nuland)

The entrepreneurial endeavors of the YTILI participants ranged from fashion design to microfinance and automobile manufacturing. Despite these seeming differences in interest and business pursuits, a common thread unites these entrepreneurs: a willingness to take risks and pioneer their new businesses as well as a desire to further their education and experience through international exchange.

The YTILI participants had the opportunity to hear from the Assistant Secretary of State for European and Eurasian Affairs Victoria Nuland who spoke about the State Department and its involvement in Europe. Attendees had the opportunity to ask questions and to speak about the nature of entrepreneurship in their home countries and challenges faced there. Some interesting points made, especially regarding the difficulty of building a new business in countries where entrepreneurship is a relatively new endeavor. Large government bureaucracy, lots of restrictions and red tape, and some cultural hostility to new ideas were all cited as difficulties facing some European entrepreneurs. Those from Post-Soviet states said that due to the influence of the Soviet Union, entrepreneurs still face some hostility in pursuing and growing business.

Later, the participants learned about American politics at a lunch with ABC White House correspondent Jonathan Karl. Many participants found it interesting to learn about American politics especially in light of the upcoming US elections. Following lunch, the participants went to the Google Offices where they had the opportunity to listen to Vint Cerf one of the “Fathers of the Internet” as well as Mr. Andrea Glorioso is the Counsellor for the Digital Economy at the Delegation of the European Union to the USA, in Washington DC. 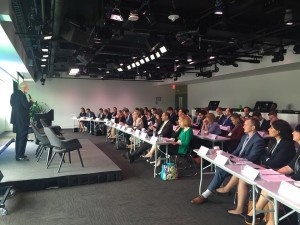 (Listening to Vint Cerf father of the Internet)

A reception at the Google Offices followed the afternoon lectures allowing the YTILI fellows to mingle and network. It was an exciting opportunity for me personally to get to meet so many young individuals with visions and plans for how they would make an impact in their countries and globally.

The university I currently attend (Brigham Young University) has one of the US’s top entrepreneurship programs (currently ranked #2 by Forbes). Having taken several business courses, including courses about entrepreneurship, getting to work on the YTILI program was the opportunity of a lifetime. In no other location would I likely be able to make the number of connections I did and learn from the business experiences of such a wide range of people who are actually in the process of starting and building businesses.

In the coming days and weeks, I have no doubt that the YTILI fellows and those who interact with them will gain valuable insights and skills from their interactions. Entrepreneurship is a risky venture but for those who are willing to make the leap it can be an incredibly rewarding and exciting experience. I wish the YTILI fellows good luck as they work in their various fellowships and travel to the Global Entrepreneurship Summit in San Francisco.

The Rise of Thematic Diplomacy

Improving Partnerships and Collaboration in Cybersecurity

A Personal Reflection on the Complexity of Hispanic Heritage Month