Pyongyang is a showcase of the idyllic North Korea. Only the privileged class is allowed to live in the capital city.


Truth be told, I was looking forward to the premiere of The Interview this Christmas season. And it’s not because the buzz surrounding the hacking of Sony, in what seems to be a direct act of retaliation for financing and producing this movie. It wasn’t even because of all the media attention the movie got as a result of this controversy. And most certainly, it was not because of the artistic value one may find in certain cinematic creations – which was probably not the case here anyway. I simply wanted to see the movie because I was curious to see how realistic the movie portrays the reality of North Korea.

Now one may say that this was to be a comedy, a parody of this regime and of the reality in the country. But for any comedy to be successful, it has to have a grain of truth. It was “it” that I was after. You see, I was lucky enough to be one of the few to have traveled to North Korea, or more correctly, the Democratic People’s Republic of Korea (DPRK) as the country is officially known. My trip, as most go these days, was with an organized group in the summer of 2012. 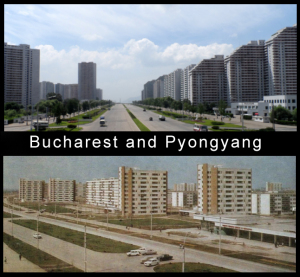 Traveling to North Korea raises multiple ethical questions because it is a well-known fact that tourism has become, in recent years, a reliable source of hard currency, and they are after every penny you’ve got. I, too, wrestle with that dilemma knowing that my dollars would go to support what former President Bush famously labeled one of the “Axis of Evil” regimes.

My ethical conundrum was probably less severe. For me, this was in many ways an opportunity to see, experience and relive a reality of my own childhood. I grew up during the “golden” years of the Ceaușescu regime. While many caution about drawing parallels between the two, it’s hard not to.

Romania was by any measure the most oppressive communist regime in Eastern Europe. Ceaușescu, who became a close friend of the original Kim (Kim Il Sung), became enamored, if not infatuated, with the North Korean type of communism. He probably was more envious of the cult of personality that Kim Il Sung was already developing in the 1980s and which his son, Kim Jong Il, and now grandson Kim Jong Un, have taken to new heights. I did find in North Korea the sad reality of what Romania could have become if 1989 had never happened. Ceaușescu was already grooming his son as the next in line and while no statues had gone up to immortalize our “Dear Leader,” his portrait did adorn just about every room in the country.

I also went to North Korea because I thought, in 2012, that the country might be in the clasp of a major change. The young and inexperienced Kim Jong Un had yet to really establish himself as a leader and the transition after the untimely death of his father seemed far from certain. The Chinese were also making inroads in the country with rather significant financial and economic investments aimed apparently at propping up a failing regime and economy; an attempt or a price to pay, it seems, to avoid a total regime collapse.

I wanted to see a North Korea that was a unique political, economic, and social experiment in my and our lifetime. History has proved me wrong so far on this one as today Kim Jong Un seems just as firmly in charge as his father and grandfather before him. The Chinese too seem to have curtailed their economic interests. In part, this is because the North Korean economy is doing somewhat better and even for the Chinese, the association with the world’s most vile regime is not without consequences.

For now, I’m left wondering what the movie could have been and hoping that it will soon be in a movie theater, on a TV or on my computer, I’ll be able to draw the comparison between the North Korea I’ve seen and the one Hollywood portrays/imagines.