As the world celebrates International Justice Day, a light shines on the grievous abuses of human rights that are perpetrated by violent extremism in all reaches of the globe. On July 17th 1998, 120 states from a diverse coalition of regions voted in favor of the Rome Statute which established the International Criminal Court (ICC). The overwhelming universal support for the statute signified the international community’s desire for a more secure and just future. The ICC is mandated to hold accountable those individuals who condone or perpetuate: genocide, crimes against humanity and war crimes. By opposing the impunity that has accompanied such atrocities for centuries, the ICC is inching the international community one step closer to justice and security for all. However, the ICC does not stand alone in its pursuit of global justice. Meridian’s vision for a “more secure and prosperous world that is characterized by mutual understanding, innovation, economic growth, and inclusion” is realized through their array of innovative exchange, education, cultural, and policy programs. Meridian gives leaders the chance to learn from each other, build networks, and gain access to critical information and resources. When leaders return home and implement change that promotes equality and combats intolerance, everyone wins. 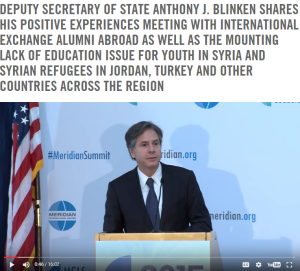 As the rising tide of nationalism spreads across the globe, leadership through collaboration and interdependency becomes increasingly important. Meridian’s Global Leadership Summit is an excellent example of a platform for real international leadership convening.  During the 2015 Leadership Summit, Deputy Secretary Antony Blinken delivered remarks on the impact of U.S. foreign policy on global prosperity and security. More recently, he spoke with the international media at the UN Office in Geneva after delivering the U.S. national statement before the UN Human Rights Council on March 2nd of this year. He reinforced the importance of human rights leadership and urged the Council to “act on issues of anti-discrimination and inclusion at a time when people are targets of violence simply because of who they are — because of their sexual orientation, their gender identity, political beliefs, or their religion.” He also spoke to the mounting lack of education issue for youth in Syria and Syrian refugees in Jordan. Meridian shares this belief of equality and inclusivity and yearly provides a stage for international leaders to exchange thoughts on important subjects such as human rights.

While the Women’s Rights Movement has seen incremental success in the 21st century, there are still many countries in which women are married off as children, sold into sex slavery, disenfranchised, and kept from education. Meridian is proactive in its support for the Women’s Rights Movement and understands that when women succeed, the economy, culture and society succeeds. In the last fiscal year alone, Meridian ran 24 programs focused specifically on empowering women and girls. One of Meridian’s most notable programs that advocate for women’s rights is The Council on Women’s Leadership (CWL), which raises awareness of women’s leadership issues and builds understanding of the political, economic, and societal factors impacting women around the world. Today, women face more adversity than their male counterparts in reaching leadership positions in both the private and public sector. Meridian equips female leaders from varying sectors and countries with tools to succeed by facilitating dialogue that promotes the gender equality agenda. Meridian is able to do this through convening with interactive discussions, collaborating with NGOs and the public and private sector, and bridging global networks by connecting stakeholders. 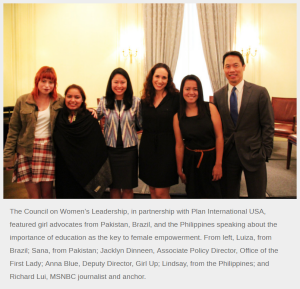 This March, Meridian helped implement Goldman Sachs 10,000 Women – U.S. Department of State Entrepreneurship Program for Women in the Middle East “Investing in Women: Promoting Social and Economic Empowerment Among Entrepreneurs from the Middle East and Northern Africa”. Women entrepreneurs engaged in the business, media and nonprofit sectors from the Middle East and Northern Africa were brought to the U.S. for a two-week program focused on entrepreneurship, leadership training, mentoring, and networking. As part of this two week program, Meridian hosted a speed-convening and round table discussion that enabled the participants to network with DC’s top female entrepreneurs, executives and policy makers. In the same year, Meridian partnered with Plan International USA to host a panel discussion which highlighted girl advocates from Brazil, Pakistan, and the Philippines and focused on global women and girl’s issues to promote intergenerational dialogue. For gender equality to be realized internationally, there has to be collaboration and connectivity. Meridian’s approach in countering gender inequality and discrimination is through mutual understanding and inclusion.

International Justice Day aims to celebrate those leaders who are enacting policy that promotes justice and also shed light on those areas of the world which continue to endure crimes against humanity, war crimes and genocide. Arguably all of these heinous injustices have a common denominator: fear. A world that is crippled by fear and misunderstanding is blind to the value of exchanges; the productivity that can stem from collaboration remains unseen to those whose worldview is blurred by misunderstanding. Productive foreign policy that creates safety and prosperity can only be realized through mutual understanding. Meridian is at the forefront of facilitating international exchanges. The U.S. Department of State’s premier professional exchange program, The International Visitor Leadership Program (IVLP), is implemented in partnership with Meridian International Center. Through short term stays in the United States, current and emerging foreign leaders expand their professional networks by meeting with their American counterparts. Additionally, these exchanges help to dispel stereotypes and deepen mutual understanding between Americans and emerging leaders from around the world. 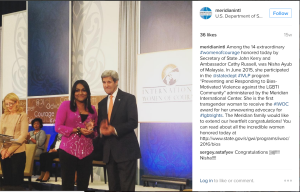 Meridian has successfully executed programs that encourage refugee resettlement and integration, enhance the lives of people with disabilities, combat trafficking in persons, explore evidenced based alternatives to incarceration as part of prison reform, and prevent and respond to bias-motivated violence against the LGBTI community. On July 17th, we celebrate Meridian’s current and past programs that have advanced human rights and civil liberties. In a day and age when the international community is so evidently crippled with intolerance and xenophobia, Meridian is a beacon of hope that remedies global injustices with connectivity, mutual understanding, and inclusion.

Twiplomacy, World Leaders and Social Media in a Pandemic Age