The U.S. Congress – Republic of Korea National Assembly Exchange Program is a unique program designed to broaden the perspectives of Korean and American young people on the legislative process, the history of U.S.–Korean relations and current economic, political and security aspects of the bilateral relationship. The program also provides the U.S. and Korean participants with firsthand experience of each other’s people and culture, and creates opportunities for participants to form long-lasting personal contacts.

The following was written by Leah Castleberry, a participant of the program.

It was truly an honor to be selected as a member of the 38th Annual U.S. Congress – Republic of Korea National Assembly Exchange Program delegation. I learned a great deal about U.S. Korean relations, past and present, and hopes for unification of the Korean peninsula. I also explored the beautiful country of South Korea—taking in the mountains, ocean and the diverse cities of Seoul, South Korea’s modern capital, and Gyeongju, the antient coastal capital of the Silla kingdom (57 BC – 935 AD). However, the most impactful experiences by far were the opportunities I had to engage with Korean people directly—exploring D.C. and Seoul with my counterpart from the Korean delegation, living with the Lee family during my homestay experience, and hearing the unforgettable stories of three teenage North Korean defectors while visiting their school. 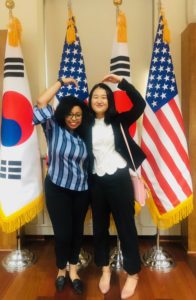 My counterpart JinGyeong Kwon and I had an amazing time hanging out with one another in both Washington, D.C. and Seoul! JinGyeong is studying Contemporary Korean Literature at Korea University Graduate School. Since I had attended Howard University in Washington, D.C. in my undergraduate years, I was able to take her to some of my favorite places in the D.C. area. Along the way, we learn more about each other as individuals as well as our cultural backgrounds. It was an honor to take her to the Smithsonian’s National Museum of African American History and Culture, where I could share more with her about the African American experience as a key component of the American story, past and present. After returning to Seoul, JinGyeong took me to a traditional Korean music concert, Korean spa, and Daegu Samsung Lions vs. Seoul LG Twins baseball game. (Of course, we were rooting for her hometown team, the Samsung Lions!)

I spent one weekend living with the Lee family in the city of Incheon. They welcomed me into their beautiful home as if with open arms. Since I did not speak much Korean and they only spoke some English, I used my time with them to add new Korean words to my vocabulary. We went to the theatre to see The Lion King, explored the city of Incheon, and sang BTS and Whitney Houston while cooking traditional Korean meals in their kitchen. In our conversations the Lee family echoed the sentiment I had heard throughout the program, that they feel North Korea and South Korea are one Korean family. The Lees were such a blessing to me and I will be forever grateful for their hospitality. Even though we did not speak the same language, I quickly realized that we are so much more alike than we are different. 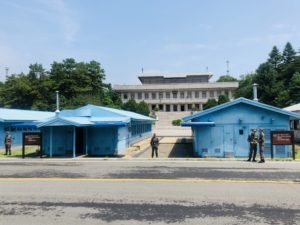 Hangyeore Middle and High School was opened in 2006 for young North Korean refugees, providing a regular school curriculum along with programs assisting with their adjustment to South Korean society.

At Hangyeore our delegation met with three high school students to learn more about their stories and their time at the school. The students shared what they felt comfortable with about their experience and asked questions of our delegation as well. Some of them are in South Korea without their families, which must be tremendously difficult for anyone but especially a child. The students shared some of their most precious memories with us—sledding with their friends in the winter and celebrating Korean Thanksgiving with their families. It was moving to hear about their positive memories and experiences in North Korea, since the general narrative of North Korea is dominated by the most arduous aspects of life in North Korea. 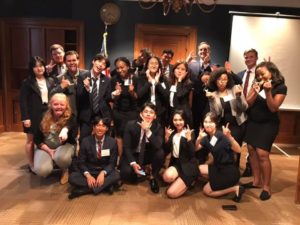 For these children, unification of the North and South may be the only chance they have of seeing their loved ones again. It was important to me to share with the students that while our country is in disagreement with North Korea politically, we as Americans feel sympathy for the North Korean people and the lack of freedoms and liberties they have, many of which we take for granted. I will never forget these three students or their remarkable stories.

I am grateful to Meridian International Center, the Office of Representative Bobby Rush of the 1st District of Illinois, and the Korean National Assembly for selecting me to take part in this once-in-a-lifetime experience, which I may not have been afforded otherwise. Thanks to everyone who shared their history, culture, and perspectives with me along the way, my journey with the U.S. Congress – Republic of Korea National Assembly Exchange Program was a truly immersive and authentic cultural experience through which I learned a great deal about life in today’s Korea. In turn, I gained a new level of understanding of my own place within our ever-evolving world and how I aspire to contribute to it.