Members of the Reporting Tour at the U.S. Capitol Building

In late October of 2019, six journalists from across South and Central Asia embarked on a 10-day informational reporting tour throughout the United States and the Republic of Korea. During their program, the journalists had the opportunity to learn about both the United States and Republic of Korea’s respective policies toward the Democratic People’s Republic of North Korea by meeting with government officials, policy experts, regional advisors and even North Korean Refugees. This tour was the third iteration of the six-part program sponsored by the U.S. Embassy in Seoul, which aims to provide journalists from the six federally-recognized regions of the world with an opportunity to better understand the policies of the United States and its allies towards the Korean Peninsula.

As an alumna of several educational exchanges to South Korea and India, I enjoyed the opportunity to implement a program that would bring people from both parts of the world together. Prior to this program, I believed I had a solid understanding of the geopolitical situation on the Korean Peninsula and did not view the challenges with any sense of urgency or terror. It seemed like every day there was a threat from the North Korean regime that never seemed to happen, so it was hard for me to grasp the seriousness of the issue. However, there are many reasons why the world should be paying close attention to what is happening there.

North Korea is one of the most closed societies in the world. Everything inside the country’s borders has been created for and controlled by the regime, led by Kim Jong Un. The nation has been called out on more than one occasion for starving its people, spending billions on building nuclear weapons and threatening various western allies with annihilation if their demands aren’t met. While much is not known about the on-goings of the state outside of military and human rights abuses, North Korea is considered to be one of the poorest countries in the world and has been accused of engaging in illicit activity to channel money back into the country.

U.S. attempts for diplomatic engagement with North Korea have long been unsuccessful until recently. President Trump became the first U.S. President to meet with the Supreme Leader of North Korea for summits in Singapore and Vietnam. The meetings ended without any particular agreements reached by either country – which some consider to be a failure. Optimists, however, agree that warming U.S.-DPRK relations could dramatically transform the security and economic prosperity of Northeast Asia as a whole.

To better understand the value of this relationship, six broadcast, radio, print, and digital journalists from Kazakhstan, Bangladesh, Nepal, Pakistan and Uzbekistan came to Washington, D.C. for meetings with the Foreign Press Center, State Department officials, counterparts at Voice of America, the leader of the Committee on Human Rights in North Korea, experts at the Korean Economic Institute and a North Korean refugee. The group was exposed to not only official and academic positions towards North Korea, but also was able to gain a sense of how fellow journalists are reporting on these issues. It became increasingly evident that while the U.S. primary objective towards North Korea is de-nuclearization, the issue of human rights abuses committed by the regime towards its own people has become more prominent in policy discussions.

A highlight of the D.C. program was our meeting with North Korean refugee, Hye-Soo Kim – a pseudonym used for protection as her family still resides in North Korea. Ms. Kim relayed her harrowing escape to China via a broker that turned out to be a human trafficker. Her story of being sold and stuck in China for a few years before eventually making her way to the South Korea and later the United States put a human face on a crisis most had only heard about from secondary sources. 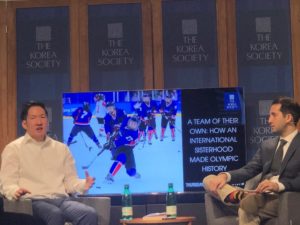 Another event that illustrated the power of personal story-telling was at a book discussion at the Korea Society in New York City. Seth Berkman, who authored, “A Team of their Own: How an International Sisterhood Made Olympic History,” discussed how the South Korean women’s hockey team was told mere weeks before the 2018 Olympics in Pyeongchang that they would be forming a joint team with the North Koreans. He talked about how language and cultural barriers fueled the mistrust they had for one another and the resentment on both sides for what they considered to be political puppetry. Yet towards the end of the Olympics, an undeniable sisterhood had formed.

News about North Korea is often inflammatory or alarming, which makes it easy to forget that a country is made up of more than its leaders. So when we start putting the faces of ordinary citizens on issues that we have only read about, it becomes harder to digest the extreme measures undertaken by the international community against a region with a severe humanitarian crisis. The UN Security Council has placed a number of sanctions on the country aimed towards crippling the regime’s economy and access to much needed resources. While these sanctions do not target humanitarian aid, citizens are still very much affected by these decisions.

Although the U.S. and South Korea continue to present a united front in regards to these measures, there was a greater sense of optimism and opportunity conveyed by South Korean officials. In 2018, there were three inter-Korean summits attended by Kim Jong Eun and South Korean President Moon Jae In. This year, both nations have taken action to de-escalate tensions at the Demilitarized Zone, or DMZ, by taking down guard posts on both sides. The Korean Government credits U.S.-DPRK relations as providing an opportunity for more peaceful inter-Korean engagement and they have expressed hope that this trend will continue.

The South Korean Ministry of Unification was established in 1969 to address the potential reunification of the Koreas. In the 66 years since the end of the Korean war and the division of the peninsula, there are now cultural, linguistic and philosophical differences between the North and South that have proved challenging for the prospect of reunification. For South Koreans in particular, the younger generation perceives these differences as an insurmountable obstacle and generally view reunification unfavorably, whereas the older generation still feel the scars of war and separation.

If you ever visit Seoul, you would never think that you were in a country stuck in a war that has been going on for over 60 years. The streets are full of tourists, grand shopping plazas, karaoke rooms and many other attractions. An atmosphere of fear is absent despite being only 30 miles away from the Demilitarized Zone (DMZ) – a heavily guarded strip of land dividing the two Koreas. The tour was scheduled to visit the DMZ, but due to a swine flu outbreak, the area was closed. However, adjacent to the area was Imjingak Park which is home to the Freedom Bridge – a railroad site once used by repatriated POWs and Soldiers returning from the North. Looking out across the Imjin river, the atmosphere was electrifying and terrifying, because we knew 7km ahead of us was the border of the world’s longest war.

The opportunity to get an even closer look at the border took us to the Ganghwa Peace Observatory in Incheon, where only the 2.3 kilometers of the Yeseung River separated the us from North Korea. The observatory included high-performance telescopes, a museum, restaurants, and a room filled with the hopes of visitors to a peaceful resolution to the “Endless War.” Through the lens of the telescopes, we could see coastal towns and movement of people. I was once again reminded that there are ordinary people living ordinary lives right across the river.

At the end of the program, the journalists returned home with a greater understanding of the geopolitical context surrounding the Korean Peninsula and an abundance of stories to share. Throughout my experience with the group, I was reminded of the power of public diplomacy and the necessity of programs such as this one. The exchange of information and ideas have the ability to change the world – one story at a time. By providing others with these opportunities, we are promoting peace and mutual understanding with new friends all across the globe.

Here’s what several journalists had to say about the program:

“The reporting trip had helped me to understand the Korean Peninsula. Before the tour, my knowledge about the DPRK and the Republic of Korea, nuclearisation and human rights abuses in the DPRK, the U.S. policy wards towards the Korean peninsula, and other related issues was very limited.”

– Zia Ur Rehman, The News International

“The tour was fantastic because I have learnt and been informed of many things concerning U.S.-DPRK policy by the officials in both U.S. and South Korea. I believe, [on-going relations] will help to resolve the ongoing tension between U.S. and North Korea. After completing the tour, I am filling reports that will be published as news stories to my newspaper on the issue which will put pressure to North Korean authorities to sit on the table.”

“The tour helped me to understand why the U.S. and South Korea have chosen their current policies towards North Korea. And what I liked the most, for a more complete picture, Meridian not only held a series of meetings with different kind of specialists, but also took us to various places for the whole immersion into US- and inter-Korean context.”