Posing with Robert Johnson, Legislative Affairs in the Office of Senator Mark Kirk and also the former officer of Senator now President Obama.


Ukraine has been a constant topic in the global news cycle over the past year or so, especially since the annexation of Crimea by the Russian Federation in March 2014.  The public narrative and the news cycle around that particular event and the subsequent unrest in eastern Ukraine have been driven primarily by Western media on one hand and by Russian media outlets on the other.  Little in this global discussion and debate has been shaped by Ukraine’s own narrative.  One may legitimately ask, “Why is this the case?”

In part this has to do with the reality of the global media landscape in which multinational media conglomerates bring to the table a vast array of resources and expertise but also a long history of covering global news and events.  Ukraine has been an independent country for less than a quarter of a century.  Despite this relative long period of intense democratization, the legacy of Soviet-style “communications” techniques (aka propaganda) that value information “hoarding” over sharing is very much alive.  Ukraine’s new leadership recognizes the need to better communicate its message to a wider global audience and also with their own citizens, especially in an era of rapid economic and political change.

Recently the U.S. Embassy in Ukraine funded a program on “Strategic Communications” designed to provide the participants — spokespersons or media relations representatives from a variety of regional and city administrations from throughout Ukraine – with a better understanding of how properly managed, transparent strategic communications in a democracy can help build confidence and mutual trust and how local governments, at all levels, use strategic communications to better communicate with their citizens.  This in turn can strengthen the efforts at a local level, to build a strong and transparent democracy in the heart of Europe.  The program, was also an opportunity to provide the participants with first-hand experience of how the United States Government, at all levels, uses strategic communications to better communicate with its citizens.

The national itinerary, which included stops in Washington, DC, New Orleans, LA, Salt Lake City, UT and Chicago, IL, took them to cities which covered rather different aspects of “strategic communications,” aspects which were a reflection of their unique histories and experiences.  In New Orleans the overarching theme was crisis communication during a local or national emergency crisis and how that differs from the everyday messaging.  The program drew on the lessons learned from Hurricane Katrina and the Chevron oil spill and included meetings at the Governor’s Office of Homeland Security and Emergency Preparedness and the City of New Orleans’s Office of Performance and Accountability. 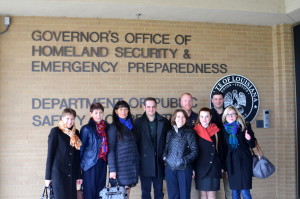 The meeting at the Louisiana Governor’s Office of Homeland Security and Emergency Preparedness was a highlight of their entire U.S. program. 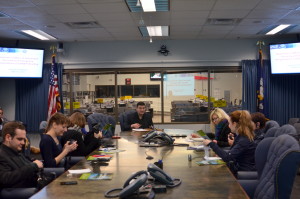 Learning about the communication strategy used by the office and lessons learned from Katrina.

Visiting the Command Center at Governor’s Office of Homeland Security and Emergency Preparedness. 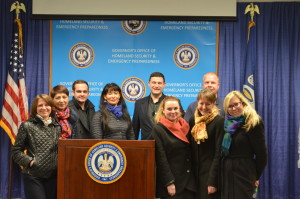 In the Press Room of Governor’s Office of Homeland Security and Emergency Preparedness.

The program in Utah focused on communications around large events and on how strategic communications structures are organized at various levels of government.  Relevant meetings included a discussion with the former Spokesman for the 2002 Winter Olympics Organizing Committee and with communications teams from the City Council, Utah State Governor, Salt Lake City Mayor’s Office and from Utah’s Department of Corrections.

In Chicago, the last stop on their national itinerary, the participants explored communication around urban issues (high crime, weather, administration) and with / by elected officials.  There, they had an opportunity to meet with the spokesperson for the Chicago Police Department to discuss their Alternative Policing Strategy and with Jamie Kalven writer, human rights activist, and founder of “The Invisible Institute” to learn about his work promoting police accountability and reporting on police abuse in Chicago; at the Office of Communication and Information of the Illinois Department of Central Management Services and with representatives of the Office of the Cook County Board President to look at how state and local agencies connect with the public and the media; and also with representatives from the Office of U.S. Senator Mark Kirk and from AKPD Message and Media to look at the messaging and engagement by elected officials.

As evident from this brief program outline, this was not a program designed to reshape Ukraine’s global narrative.  It was rather an effort to share best practices regarding public and strategic communications with a select group of officials active at the local level; it was only a small first step in reshaping the public dialogue and perception in Ukraine.

So how effective was the program? Who best to answer that question than some of the participants themselves.  Here are their assessments / thoughts on the program which they shared with the Meridian program team a few weeks after their return home – enough time to “digest” their visit and to better appreciate its impact and lessons learned.

The program on “Strategic Communication” was very multilateral and perfectly planned (from both a professional and cultural perspective), with a wide range of topics of discussions and with great ideas and advice from communications gurus.  Mark Twain once said: “The difference between the right word and the almost right word is the difference between lightning and a lightning bug.”  For the people who work in the field of communications, who are in charge of transferring information, preparing strategic communicative ideas and long-term plans and visions, it is extremely important to choose a proper strategy for communication in order to have a “lightning” effect.  Thanks to this two-week professional program, we have not only expanded our knowledge, but also built a network of Ukrainian and international experts that will work on creating a stronger Ukraine.

The U.S. visit was very interesting and balanced well the professional and cultural aspects of the program.  America surprised me with its hospitality, unobtrusive, and its freedom.  This is a country where everyone can feel free. From a professional perspective, the program made me realize that in Ukraine we still have work to do in regards to strategic communication (information) especially with foreign media, and with social media.  I also noticed that America puts a great deal of emphasis on direct communication with citizens and on government openness. In Lviv, we strive for these goals as well, but things here develop and are implemented more slowly. On a personal level I found our visit perfectly organized, especially the administrative part, which is obviously very important to the success of any program.

Regarding the content of the program, based on the topic of strategic communications I can say it had excellent components and great meetings.  The one thing missing, in my opinion, was an actual participation in a communication campaign or at the very least the detailed description from the very beginning up to the end of a campaign with findings, results, etc. Personally, I discovered a new country, the U.S. even though this was not my first visit there. This is a country with lots of possibilities but at the same time with very strict and high requirements to build successful and wealthy communities.  Today in Ukraine we talk a lot about decentralization.  The United States is an excellent example of that.  I would suggest that a follow up program, could be for representatives from various municipalities to learn what decentralization really is all about.  I also want to say thank you a lot and I sincerely hope to be able to cooperate in the future and to help facilitate meetings and visits by decision-makers from Dnipropetrovsk to travel and learn from the American experience.

The program was very professionally arranged. We met a lot of people from different organizations who were useful in their own way. What I found out for myself is that we are in fact going the right way in the frame of strategic communications in Ukraine.  We use the same methods and tools to promote activities carried by our organizations, local governments, and public institutions.  More importantly is our readiness and willingness to be open and transparent with our constituency and our people. In the U.S. we saw a lot of successful examples of good communication between local authorities and people. Logistic and other organizational issues were absolutely perfect.  I was also very appreciative of the structure of the program.  It had the right balance of professional meeting, cultural activities and free time.  A special “thank you” to the Program Officer Bogdan Banu and to Meridian International Center as well!