A Profile of IVLP Alumni Becoming Heads of State


The 75th Anniversary of the International Visitor Leadership Program (IVLP) is a major milestone in the program’s history. It offers us a chance to reflect on the impact of the program by examining the numbers. More than 335 current or former heads of government are IVLP alumni. Meridian International Center is proud to have coordinated the programs of 168 of these alumni. I compiled basic data on these world leaders to see what sort of statistics could be gleaned. I focused on their age when they participated in the IVLP, how many years afterward they became a head of government and what was the length of their term. I also marked their gender and if they were currently in office.

The world has changed dramatically since the inception of the International Visitor Leadership Program. As the focal points of American diplomacy shift, the numbers of visitors from some regions have increased while others have waned. With this blog I would like to document whether some statistics about the visitors who have become heads of state have changed as well. These statistics include:

The following charts will graph the 75 year averages versus the averages by decade. The visitors are sorted according to the decade in which their program occurred. For example, if they visited the United States in 1967 and became head of state in 1991, they would be included in the 1960s. Only one visitor from the current decade has become a head of government, as such 2010-2015 will not be included in the analysis.

The first noticeable trend about the data is that the age of the visitor at the time of their exchange program has increased. However, this is offset by the drop in the number of years after their program that they become a head of state. So that while the average age of a visitor at the start of their mandate in the 1960s was 58.6 years, the average age in the 2000s was 47.5. However, this could change as more visitors from recent decades become heads of state. 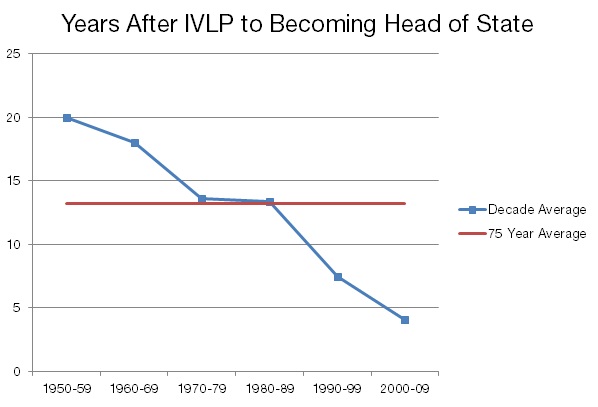 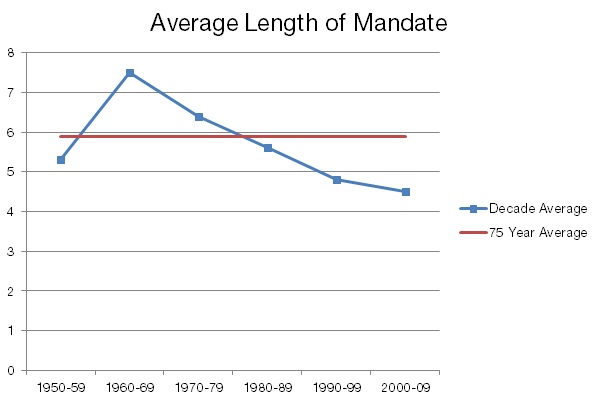 The length of the alumni’s mandate as head of government has also decreased. This data might also change when you consider the number of current heads of state by the decade during which they participated in the IVLP; until these heads of state finish their terms, the data is not complete. 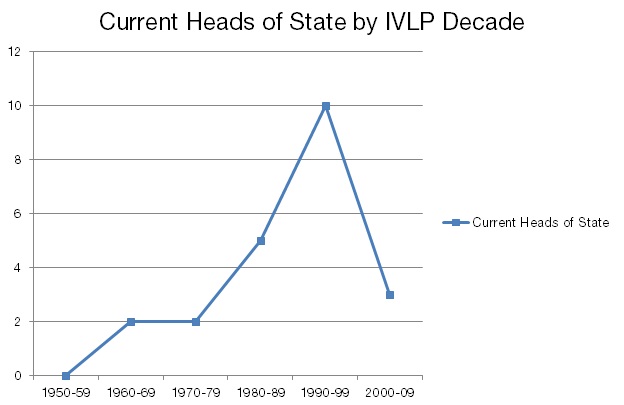 In conclusion, analyzing the data by decade can be helpful in identifying trends. However, there are a number of variables involved that could impact those trends. For instance numerous alumni could still become a head of state and those alumni that are currently serving still need to complete their terms. The broad averages from the data are helpful in understanding the IVLP’s impact. Just imagine, maybe the next 40 year old IVLP visitor you meet could be a head of state in 13 years with a six year mandate.

This blog is part of a series. The first post discusses the relationship between the IVLP and the rise in women leaders.