Participants in Bluefields adding color to their community cultural center.


A month later, in the chilly northern U.S. while anxiously awaiting signs of spring, I look back on my notes to try and give a clear notion of what went on in the last portion of my Nicaragua journey, the Community Engagement through the Mural Arts exchange, in Bluefields. Below is my attempt to do just that.

The first day of the Bluefields project we met at the Pelikan restaurant overlooking the sea. The view was expansive and big swooping pelicans gobbled up their fish as I perused the menu and met my last group of collaborators. After lunch we took a trip to the cultural center, a beautiful new facility that was funded by UNESCO and far exceeded my expectations as a place to share my work with this community.

It was a more controlled environment, and the wall was like a central pillar around which wrapped the staircase that opened upstairs to various studios of every variety, music dance and a great performance space, all of it surrounded by huge windows with the outdoors coming in – the lush greens of the tropical trees, the rusty patchwork of corrugated metal a patterned quilt of rooftops, layers of life built one on top of the other and unfolding to me as I prepared for this next project.

The next day, plans changed again and I was off to catch a boat up the Kukra River to Laguna de Perlas. Michael Hammond, who was our main contact in Bluefields, met us at the ferry dock. We met there seated on the boat and soon we set off in the rain. To stay dry, the passengers pulled a heavy plastic cover over themselves and kept it in place with the force of their arms.

The small boat was packed with twenty of us in a partially protective plastic bubble that was flapping madly and loudly. For 45 minutes we traveled down a dark, muddy river lined by low, flat jungle and mangrove swamps with their knuckly fingers digging into the surface of the water. We arrived at the high chroma village of Laguna de Perlas, with houses thatched with palm and other leaves, and stayed at a little place that had strong wifi and really good seafood so I could continue with my worldly communications and my inspiring gastronomical intake. The purpose of this short weekend side trip was to see firsthand how the people of this region live. 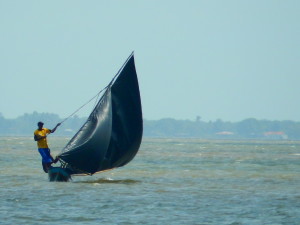 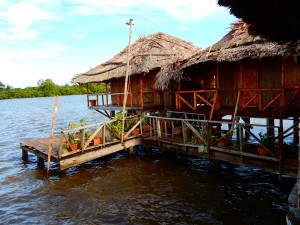 It was clearly very different from the first moment on. We took a long walk away from the river and bay to see and to experience the area and meet the folks who live there. Most of the transportation is by boat, and most of the village’s casitas are built on high stilts to protect them from possible high waters. 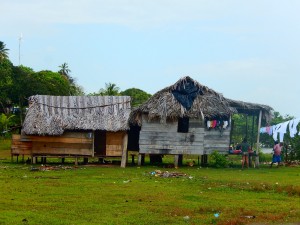 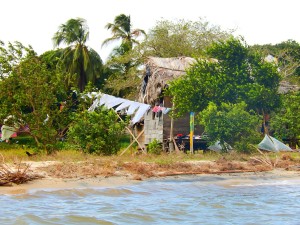 We traveled by boat to some of the outlying islands and there I spent almost an hour watching some children play. I was reminded of my own childhood – the play was simple, centered around chasing animals, playing in the dirt, and running madly around their house. I watched them as they ran around and around, but then one of them ran under the house and I was intrigued (when I was a kid that was clearly not an option for me). It was beautiful to observe for a little while the random and also focused play. Watching these little children run around was inspiring to prepare for our next project. 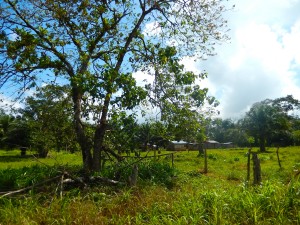 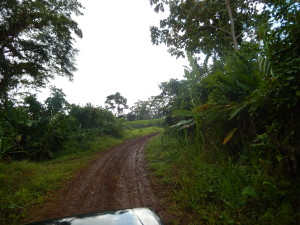 I got a chance to talk to Michael, who was the community leader and lead artist there. He is extremely involved in his community. He described how he had effectively laid down his brush to become an administrator and facilitator for the underprivileged, and those hungry for motivation and leaders, that I would meet in the days to come. I heralded his courage; I could never do the same – too much of an artists’ mind – but I do depend on the support of so many in the community at large to complete my work.

We stayed in the Laguna de Perlas area for a few days, after which we returned to Bluefields via pickup truck through the jungle and lancha (boat) down the river. A wilderness unexpected, I got a glimpse of the cleared jungle and new jungle clearing and plantings hidden in the backwoods.

Back in Bluefields, the projects began the following morning and we were once again in a group of various community members discussing ideas for this next piece. The difference with this artwork was that it was located on the interior walls of a beautifully apportioned cultural center that was yet unopened but spacious and prepared to service the entire region, with practice rooms, performance spaces, and a whole lot of potential. The participants were from the different ethnic communities and indigenous groups – the Miskito, Rama, Kriol (Creole), Garifuna, Mayagna, and Mestizo – that populate the area of the Atlantic Coastal region.

We spent the next few days drawing, designing, then painting. We had three days to pull this one together. I only worked at one site so my time was spent in the theater of the cultural center, giving color to this blank slate of a building. By the time we were through we had expanded the mural to cover twice the area of the originally proposed piece, not unlike the other projects that came before. 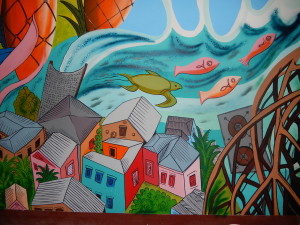 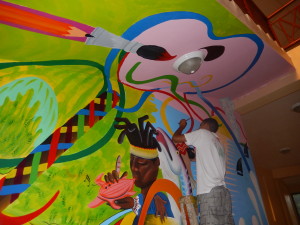 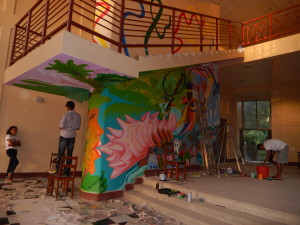 After a morning press conference and a half dozen microphones and cameras, the afternoon led to the final dedication in Bluefields in the form of a parade through the streets, with drums, dancers, paintings, banners, and the local recycling turtle mascot waving at the crowds. 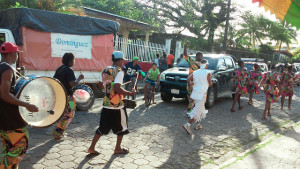 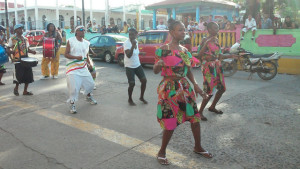 The procession passed all three sites and finished up with beautiful rhythm dancing on the tiled floor of the cultural center. The sound from the drum corps that had led the parade was deafening, and the ring after their last beat was followed by a deep silence, then overwhelming applause. 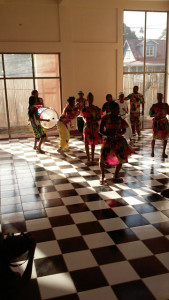 A few words, then the giant green tarpaulin that covered the artwork was dropped to the floor for dramatic effect and the crowd applauded. More interviews and cameras. The evening’s meal was lobster on the hilltop overlooking the sea from afar. The next day, Michael’s family made a big mixto soup with all varieties of seafood in his home before I took my flight to the Corn Islands. Thus ended the planned activities for my Nicaraguan journey.

As I spent the next days on the beach wandering among the boat wreckage and sea jetsam, I reflected on the various people with whom I had come in contact with over the fast month that I spent there and felt somehow very full of the experience, and also in many ways that I was somehow fulfilling a part of my life neglected, sharing something so simple and yet so very complex in a part of the world that was both inspiring in the natural sense and open to the world that I could share with the artists and community I came to find. 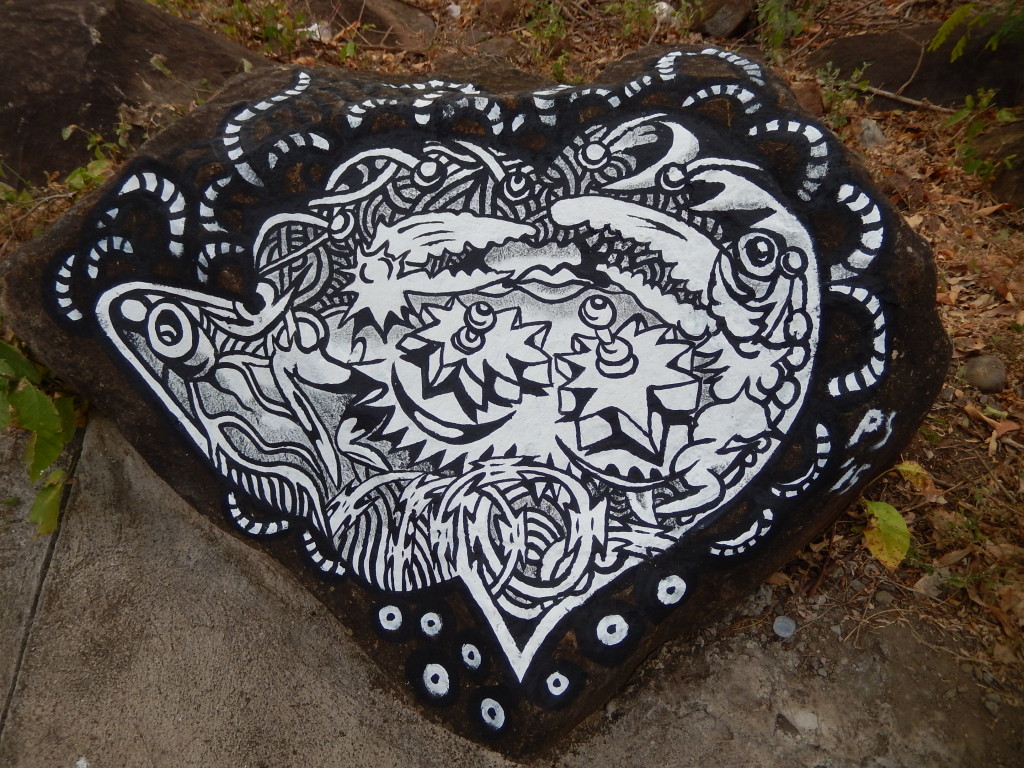 My trip ended a week later. I spent my last few days on Isla de Ometepe, a volcanic island shaped like a figure eight that had a beautiful, gently smoking monster of a volcano 60 degrees up on the horizon. There I rented a bicycle, rode around on the beach, and toured the island to find a place to make a small, final painting on a large dark rock. It was Valentine’s Day, so I left a heart on the rock with my signature crustacean flower with staring eyeballs, framed in a heart shape for holiday effect. As I finished my drawing, a little guy on his bike stopped to watch me work, and excitedly told me he was taking an art class and was very happy to watch me making a piece on his street. So I asked him if he wanted a brush and his eyes lit up. Then I thought for a moment and offered the rest of my paint to him. It was pretty high quality acrylic I had purchased in Managua for a commission there, and now had found its home here on Isla de Ometepe. He took the paint with a beaming smile and wrapped the bag around his handlebars, containing his excitement as he pedaled off up the hill, smiling. 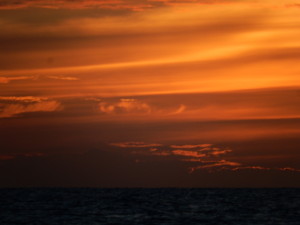 As I rode off, lightened by my gift, I pondered some imminent changes on the horizon that would forever alter this amazing place: a canal will tear through the heart of nature here to compete with the one in Panama, organized supposedly by a single Chinese businessman in cooperation with the Nicaraguan government. It would be a massive project that I’m sure when it comes to pass would impact the entire world. I knew little of the project before I came but apparently it would flood this volcanic island, or at least part of it. It’s strange to imagine, but changes are going on all over. I flew back to Managua, checked out some more volcanoes, finished my painting at the Nica North American Cultural Center, adding color to my feather, and met my good friends Andrew and Lisette from the U.S. Embassy Managua and Hazel, Crow, and Carlos from Jóvenes por el Diálogo, one last time. They were all so integral to the success of this project, and I can’t thank them and so many others enough for this great experience. I will surely return here in the future, knowing I am welcome in this place that has fueled my imagination for the next year.