Artist Michelle Angela Ortiz, her assistants, and community volunteers from la Colonia 21 de Febrero in front of their mural.


I’m honored to represent the United States for the Department of State’s Bureau of Educational and Cultural Affairs’ (ECA) Community Engagement through the Mural Arts exchange. During the first part (March 16-27), I worked with community members from a neighborhood called La Colonia 21 de Febrero. I’m heading back to Tegucigalpa, Honduras, today to continue my program. For the second half of my exchange, I’ll be working with the community of La Colonia Estados Unidos. Here’s a recap of Part 1:

On the evening of March 16th, I arrived in Tegucigalpa after flying over the beautiful glimmering lights in the mountains surrounding the city, and was greeted by staff from the U.S. Embassy Tegucigalpa. The next day, I attended a community meeting held in El Centro de Alcance in la Colonia 21 de Febrero, one of the many neighborhoods in the city. A total of 15 people came to learn about my work and how to participate in the project.

I was very excited to get started and to meet with my core group of assistants – Julissa Gomez, Lester Betancourth, Walter Figueroa, and Wendy Meraz – all local artists working in Honduras. Additionally, it was great to meet Yolanda Torres from the in-country partner, Alianza Joven Honduras – USAID. I led several workshops with them about their vision as artists working in communities. During our sessions, I shared with them various ways to engage the community in the creative process. They also assisted in facilitating the mural design sessions with la Colonia 21 de Febrero participants.

For three days, the community members participated in workshops that explored the themes they wanted to address in the mural. The themes the participants selected were: Nourishing the Environment, Security and Stability in la Colonia, and Empowerment of Women and Youth.

The mural design incorporates images of the people from the community representing the different themes. Sra. Gladys cleans the community school every day. She is someone who is proactive in la Colonia and works hard to keep the streets clean. It was fitting to have Sra. Gladys as one of the models in the mural – her hands represent the woman who gives love, protection, and nourishment to the community. 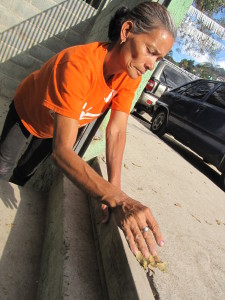 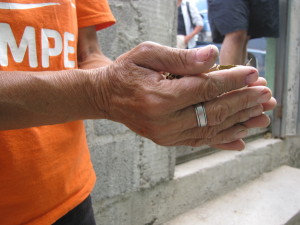 The mural, entitled “El Nuevo Futuro para Compartirlo Despierto,” shows the hands and leaves flying from her hands that extend to the end of the wall where a young man (modeled by one of our volunteers, Cesar David) is looking down. The colors are purple, gray, and dull. He is surrounded by cables (seen all over la Colonia) that represent the tangled conflict of drugs, violence, and lack of opportunities that Honduran youth struggle to get out of. The leaves extend to the young man as a sign of light and hope to navigate out of difficult situations. In the center of the mural is the silhouette of the family, united and caring for the child. The community stressed that security and safety can be obtained by the presence and care of responsible parents who are invested in the future of their children. The colors begin dark and dull in the lower part of the mural, and as you move up the colors transition to bright, light, vibrant colors to represent the positive change the participants want to transmit to the community.

While I finished the mural design, the assistants and community participants worked on priming the wall. 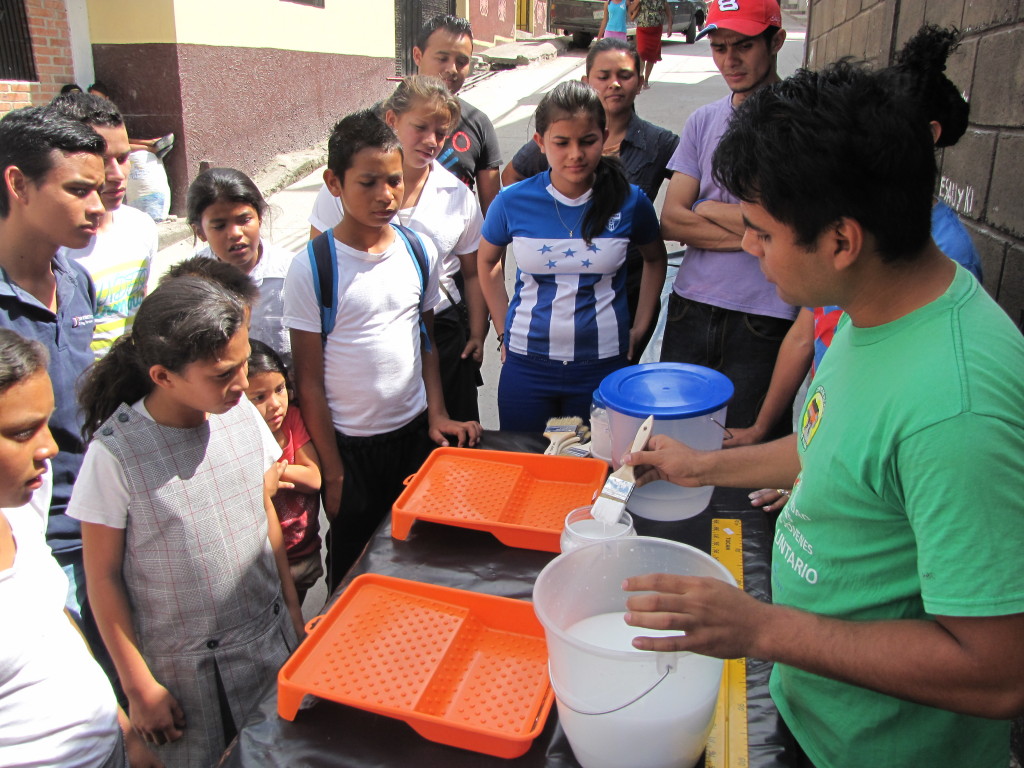 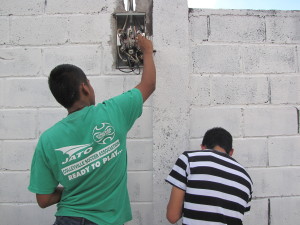 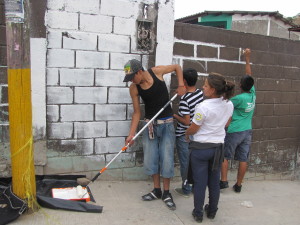 I taught the group how to create a grid and transfer the drawing onto the wall. 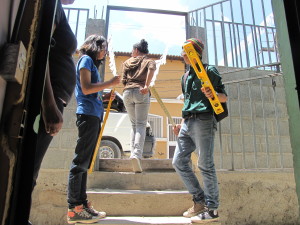 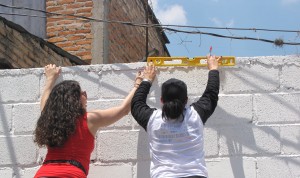 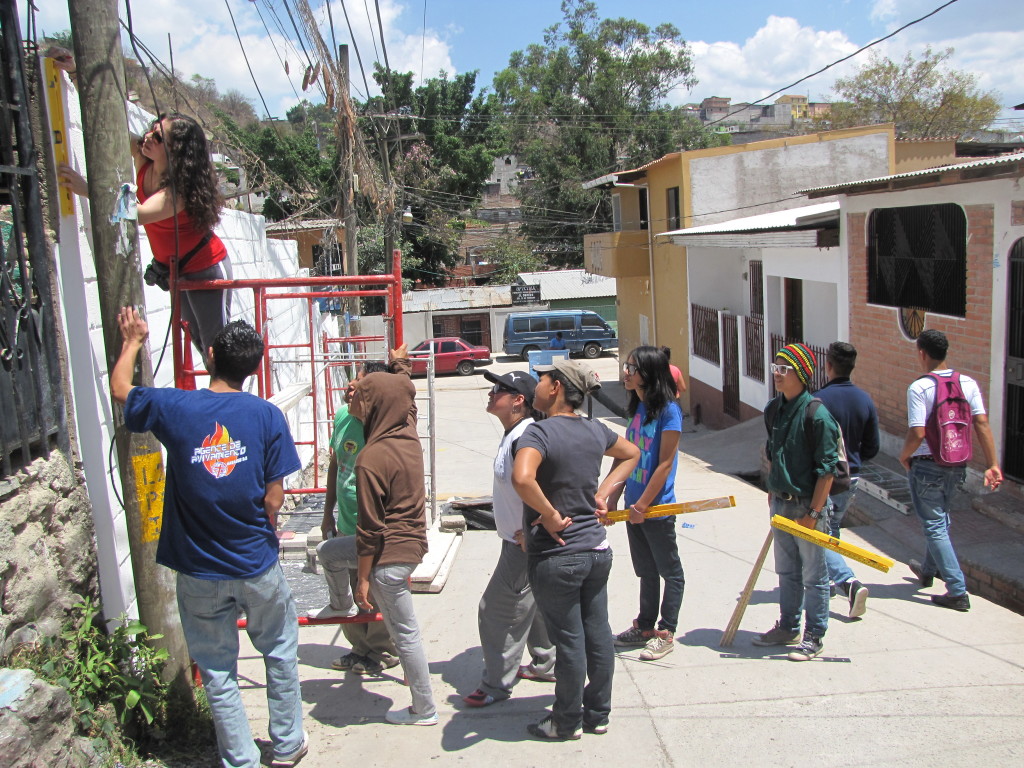 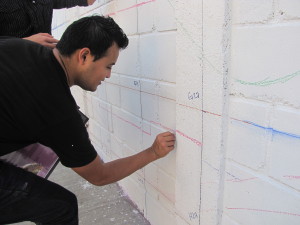 I presented a color theory workshop to the participants and they helped mix the colors for the mural. 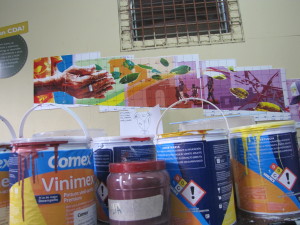 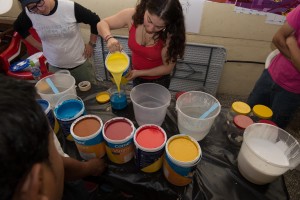 All of the participants were committed and painted diligently for 3.5 days. Every day, neighbors passed by and stopped to see our progress. The youth that are often labeled as being troubled and involved in negative activities in their community were breaking those stereotypes by transforming the wall to demonstrate the positive change they want to see in their Colonia. 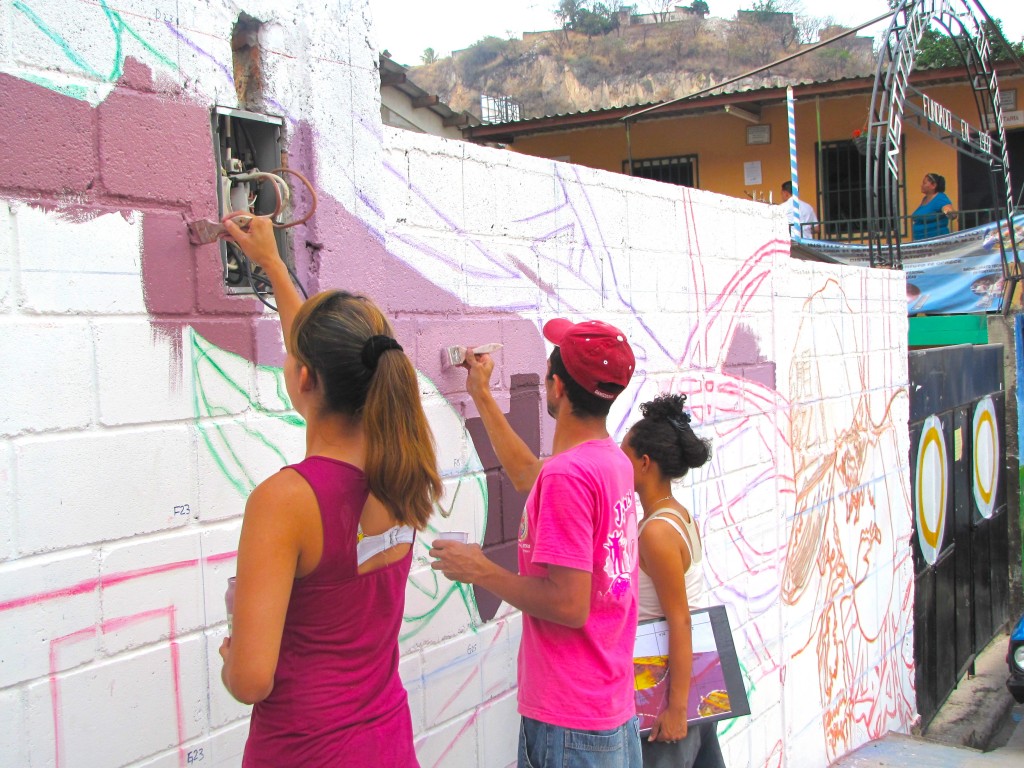 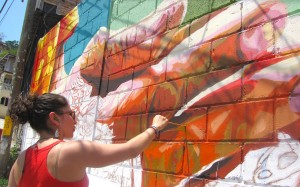 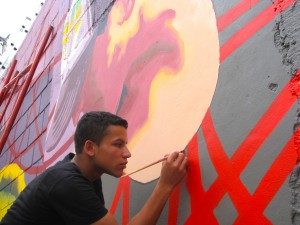 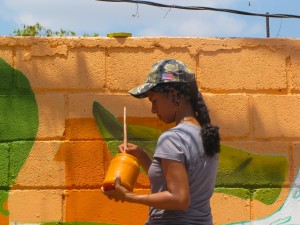 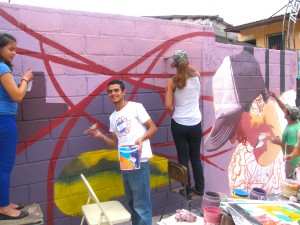 In the midst of the violence that exists in Honduras, here in la Colonia 21 de Febrero we proved that there are people who want to make a positive change. The project gave them an opportunity to speak about their social issues, be proactive in communicating the messages they wanted to convey in the mural, and work together in painting the change they want to see in their Colonia. 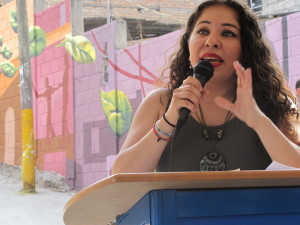 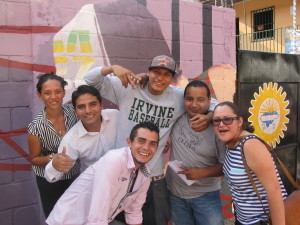 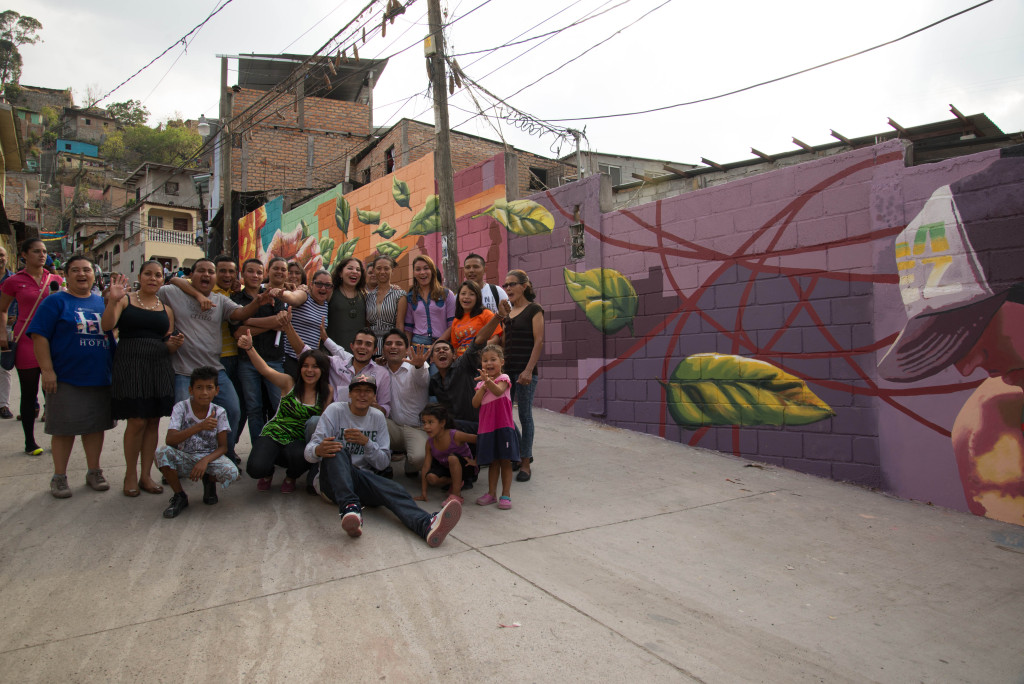