My latest journey took me to Lagos, Nigeria, the most populous city in Africa, where I worked with a community to create a collaborative public mural for the facade of a police station in Ikeja. UR4Africa, a social enterprise dedicated to fostering creativity and unique African content amongst youth and young adults, hosted me during my two week stay in Nigeria. I met Shola, the organization’s founding director, and Abraham, one of her very valued mentor colleagues, at the airport. The organization was originally ‘United Reels for Africa’ as Shola is a filmmaker and the backbone of her mission is storytelling through creative means. 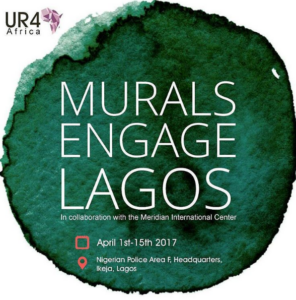 The next morning, we met with the children and mentors who would participate in the program. We discussed the predetermined themes for the project, peace and security. There were many smaller components throughout the two-week program that addressed these issues, including poetry, plays, music, and ultimately the collaborative mural. 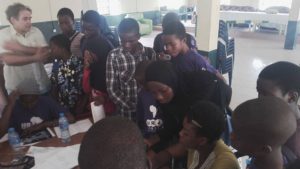 Auntie Shola, as they called her, kept the group of about 20-30 children very busy with activities, all of which happened on the grounds of the Area F Police Headquarters in Ikeja in an effort to facilitate a better understanding between community and the police. At the first workshop, the children produced a variety of sketches based on our discussion, some of which contributed to the content of the mural imagery. In addition, some of the young adult artist mentors with whom I was to work had already sent me some drawings and ideas about the design, through the “WhatsApp” messaging system. 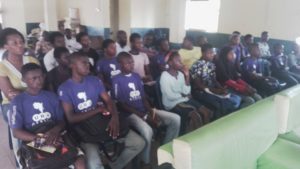 So the process was off and rolling right away.

We would meet the kids at the bus stop pick up point every morning before reconvening at the police station. There, on the second day, the kids were given a full tour and introduction to the world of police. In the assembly hall, the kids were invited to present questions or concerns directly to the police leaders, to again facilitate mutual understanding. It was fascinating to hear the very challenging questions presented (e.g., how does it feel to carry a tool that could potentially end a life?) and the careful but direct answers. By the end of the two-week program, daily contact with smiles, comments and continued interaction, produced a much more comfortable and compassionate relationship between the police, us, and the rest of the community. 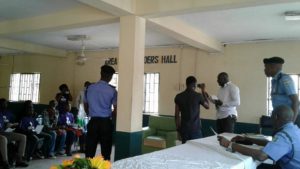 It was a learning experience for all involved.

On the third day we visited Omenka Gallery on Lagos Island, which exposed me to two very different parts of the city. The islands are known to be more affluent, but by contrast, we passed a massive riverbank slum community on the way. The settlement, along the mainland side of the bridge leading to the islands, was destroyed a few days later. 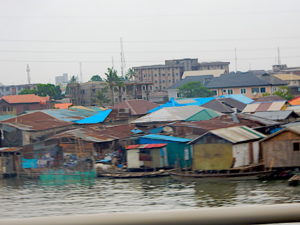 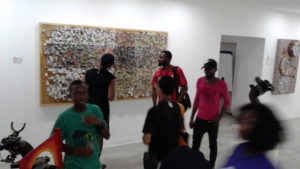 The gallery showcased contemporary art and had an exhibition on view of an artist that used to teach at Yaba Tech, the art school where many of the artist-mentor participants attend. The work was composed of collaged found objects, mostly metal narratives, and some flat artwork on the wall. The artist was there and took questions from the children about his art which led to some great exchanges of ideas about concepts and the art-making process. The children also spent time drawing outside in the garden, focusing on sticker designs, and stencils for slogans that would be used as a separate part of the mural project, for the long masonry fence surrounding the police station. 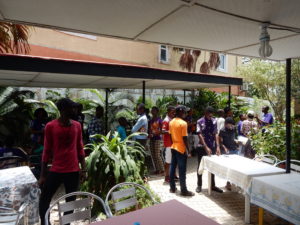 After we collected all of the sketches from the kids and artists, we began to arrange them all into a coherent design. We only scratched the surface there during our session together, so that night I took what we started, stayed up very late, and arranged it into something more cohesive. When presented to the next day, the police commander loved the design and gave us an OK without any changes. I had included a full color acrylic painting on a large sepia photocopy of the building so that she could visualize how the headquarters would look after the project. The follow morning, we set out to acquire paint for the wall, which was not an easy task. 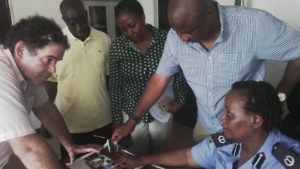 We were originally going to paint a long, low wall, but we abandoned that plan to create a much more substantial and visible piece for the main three-story front of the building. While I was elated about the change, it also meant a delay before we could get scaffolding. The group finished the priming on ladders, using rollers and brushes taped to broom handles. The equipment I was used to using didn’t appear to be available, so we improvised. That was key. 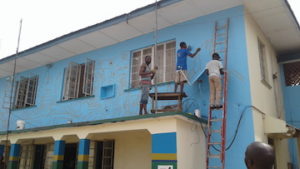 So the next day was the real first day on the wall. As soon as we arrived to the site, I began to copy the design onto the wall, in my normal manner, freehand, with a huge chunk of graphite. I had a sketch in one hand, graphite in the other, and one finger holding onto the ladder. By the end of the day, most of the design was copied onto the wall and lines were painted over in yellow ochre, a nice permanent neutral but strong color, great for the first lines of a mural. 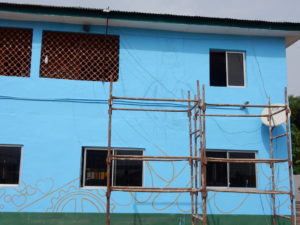 By the end of the second day on the wall, after searching and bargaining, a truck appeared with what seemed to be frames for scaffolding, and the artist-mentors worked together to assemble the structures. That was a difficult task, as many of the pieces were bent or disfigured and needed a fair amount of persuasion to fit together. They hammered one part into another, until we arrived at something that looked like a scaffolding frame. Yet there were no planks of wood, no platform or place to stand while we did our work.

When I brought this to their attention, the fellow providing the scaffolding claimed that would be an extra charge (!!!) and I was a bit dumbfounded at what he considered a rentable scaffolding on which to climb to make a painting. Then, I knew I was far away from the safety regulations that make this kind of work safe and peaceful elsewhere. I was glad we were working with this theme of peace and security, as we were discovering every step of the way that attention to this delicate matter was needed. 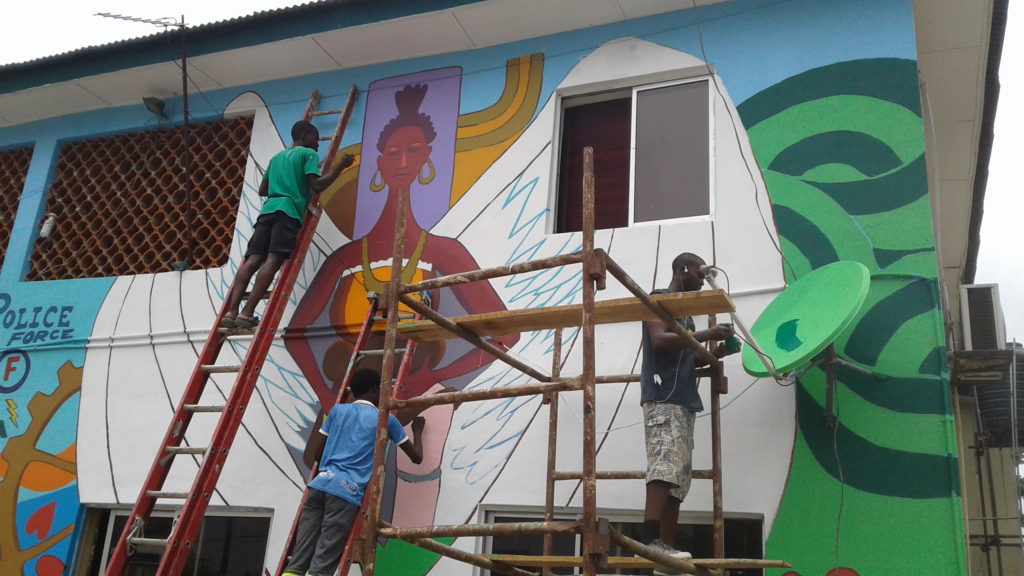 So we set to bring life to the walls. Because there were three different surfaces we were treating, it took some juggling to bring things together and maintain consistency. As always, three coats of color on everything, and then we could start discovering the subtle nuances of the design. Meanwhile, the kids were doing workshops with their ever changing roster of mentors, creating music, raps, spoken word poetry, short one act plays, all relating to the idea of PEACE AND SECURITY. 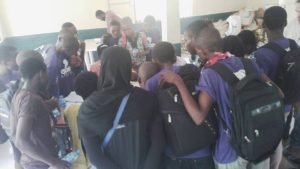 As the painting progressed, we all became acquainted and more comfortable working together. It was sort of magical how form blossomed out of chaos and what was imperceptible at first slowly gained form with the diligence and daily hard work from all involved. The scaffolding was a bit rickety and, although the younger participants were quite comfortable clambering up and settling down comfortably to paint the walls, I avoided its use. It was hard on my feet, but I stuck to the ladders and other things we had gathered to find height.

It was very interesting to watch and learn the various skills and practices of the young artists. Some of them were self-taught, some were actively in school, and others were pursuing degrees separate fields. All of the mentors were also involved in some form of artistic pursuit, but mostly the visual artists assisted me on the wall. The mentors were there for a variety of reasons: to keep the kids actively occupied, to share their knowledge, to prepare and clean up the work space, to facilitate workshop activities, etc. 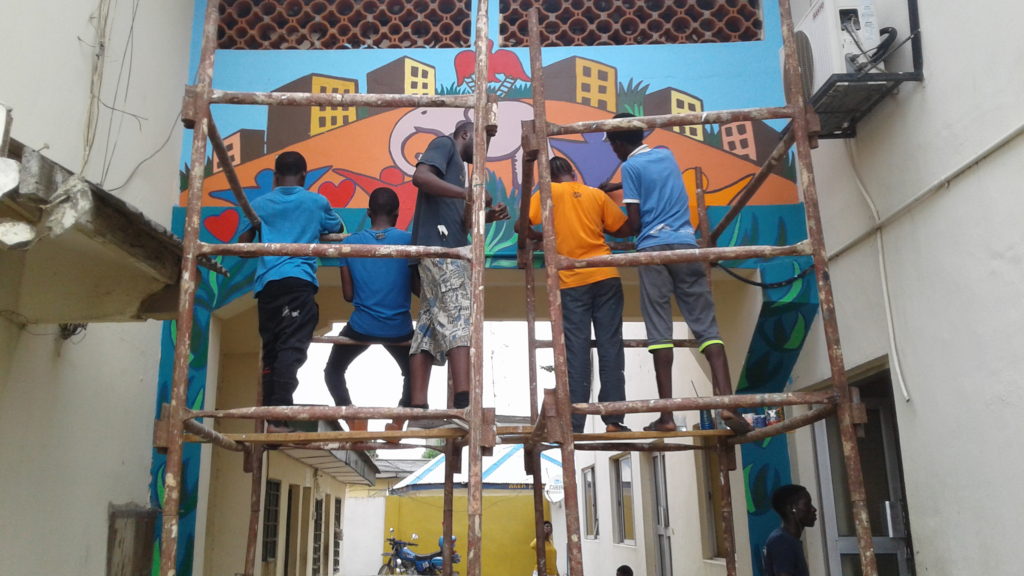 So we painted and painted. Some of the artists were really good with certain aspects of the painting, for example, decorative patterns, faces or hands, color, line, and invention, so it was clear who should work on each different aspect. Some were very comfortable up high on the scaffolding, while others were afraid of heights but open and willing to confront their fears by climbing up the ladder. Within a week of starting, the imagery unfolded and we were ready to apply the final protective coating.

It all happened so quickly, but in the span of that week we all became very close and comfortable with each other. I’m always amazed at how quickly bonds are made, how easy it is to form friendships across distances and differences. I’m reminded how similar we all are as human beings, that given a project with common goals we can work together and come to a solution using our unique skills and talents. 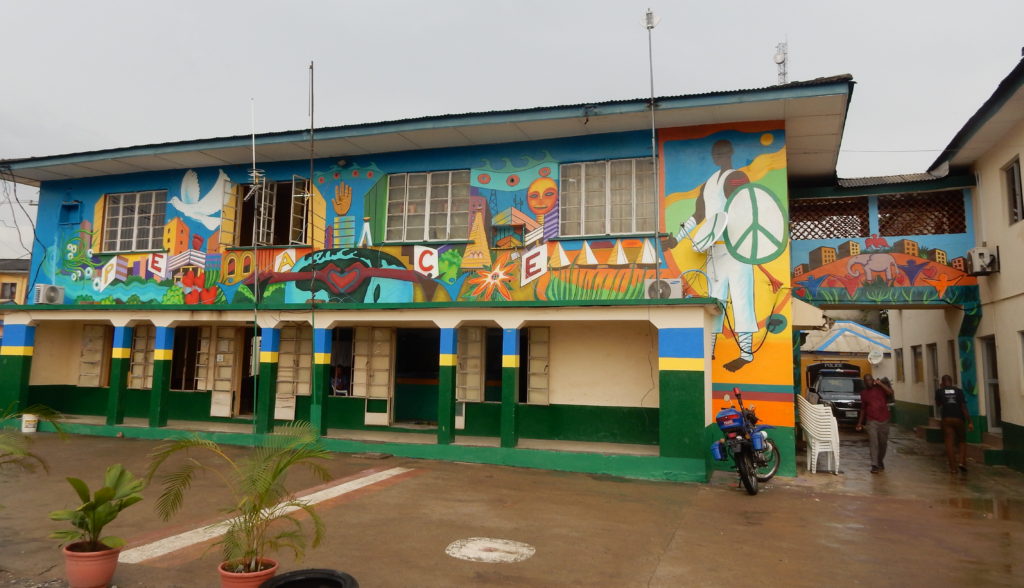 I guess that is why I seek to do projects like this. Because in this world of increasing divisions, there is still commonality and togetherness where you would least expect to find it. In this case, among a group of community organizers, artists, children, parents, and workers at the Area F Police Headquarters in Ikeja, and among the public in this massive city of twenty million people, Lagos, Nigeria. 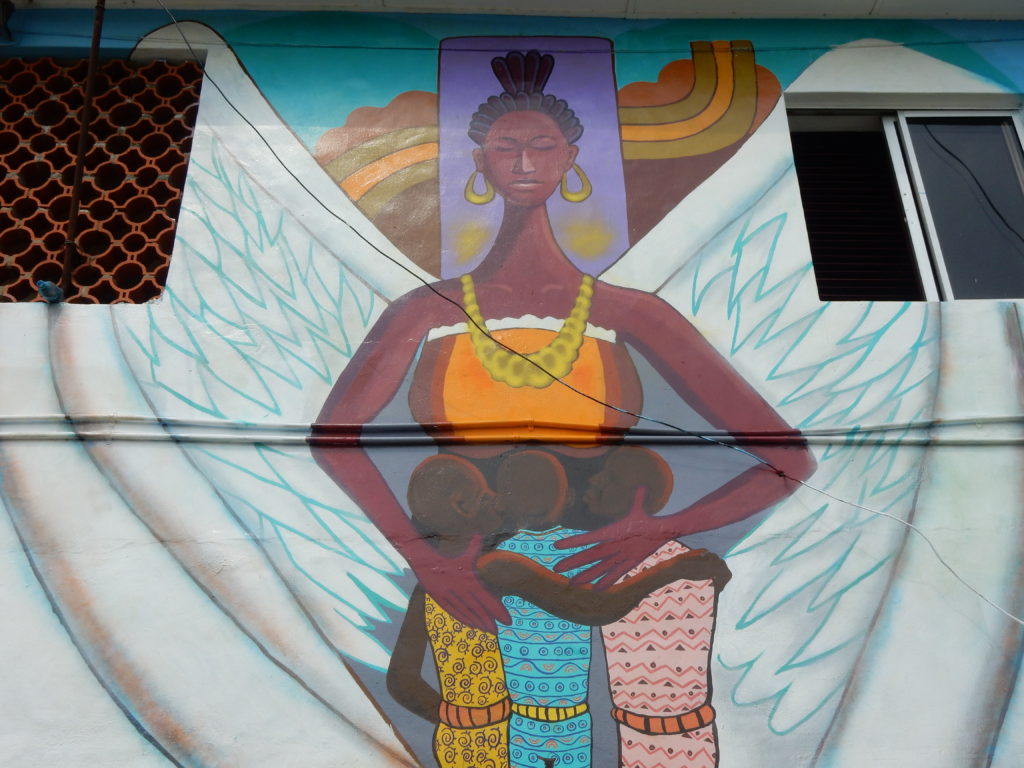