I’m home now, typing this in a coffee shop in my neighborhood, thinking about how different life is here. We take so much for granted and we could get by with much less. But a big difference in Lagos was that I didn’t wander much — most of my experiences were through the wheels of an automobile.

Our daily commute gave me a fleeting window into the street life of Lagos. Each day was a long ride through layers of traffic-ridden roads with little yellow taxicabs — called kekes (pronounced Kaykay) — Piaggio-manufactured three wheeled covered motorcycles and yellow VW Vanagons that were filled with passengers but always looking for more. We usually passed through several hours of traffic to arrive and return from the mural site but only really stopped to get out a few times. Still, the trip was always interesting. 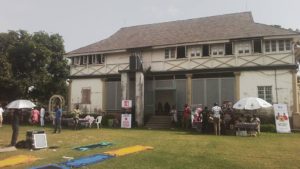 One time we were hit by one of the flying golden yellow mini vans which resulted in a flat tire. The tire was really punctured but the spare tire was locked in place with no key. Under the full moon we watched as the street activity unfolded in its own colorful way and waited for help.

Another night, after Cole arrived from the Meridian offices in Washington, DC, we went to Terra Kulture, a restaurant and arts center on Victoria Island, where we had some local food. I tried the spicy snails — which was very different from the escargot I knew as a snail dish — but still delicious.

I especially liked ma Tobi’s cooking every day on the compound — collard greens, moi moi, rice dishes, fish and chicken. She cooked for us every day and it was always delicious. The compound had a lot of chickens so there were fresh eggs all the time, and a variety of dishes that involved the many kinds of yams available. They took great care of me there at the compound with Bumni and Tomi, Shola’s cousins who were helping with the project. They were always laughing and playing great music. We talked about dreams and food. They were doing a lot of the documentation of the project and eventually transformed the footage and photos into a narrative. 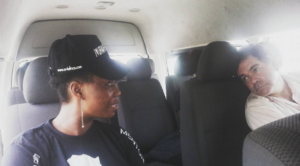 On the last week, having almost completed the work, we took a field trip in a minibus with the artists and mentors to a place that was sacred to the memory of the brutal tribal wars that occurred in the area throughout the last century. The place was called Olumo Rock. We climbed up into the rock to see what was up there, as did many others before us — it was a very popular tourist attraction. The Olumo Rock site contained massive caves and some interesting history that gave me a little bit of context to better understand the physical culture of the folks with whom I was working. 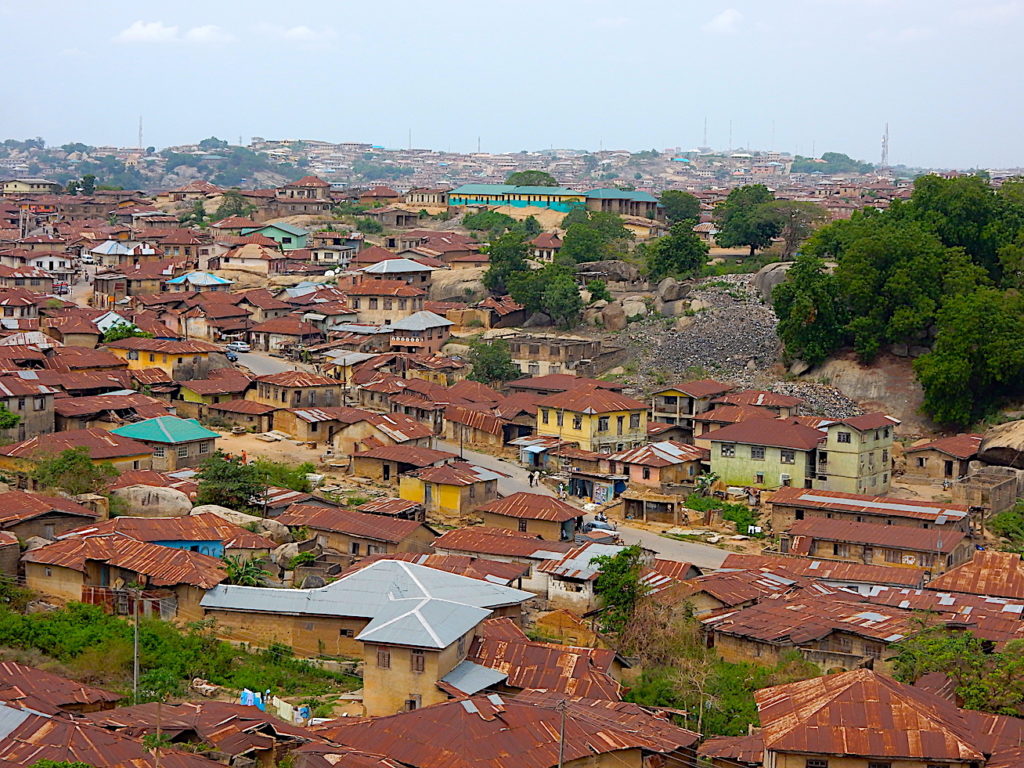 It was a hideout during the tribal wars. In the caves lived an old woman, supposedly 131 years old, who was a sort of bearer of the gift of long life. We were told that a blessing from her was like the fountain of youth, and some of the artists asked to be photographed with her to commemorate that blessing.

There at the foot of the cave was a great Baobab tree (c. 250 years old), which was sacred to the Yoruba people that occupied this space on the rock. High above the village’s angular patterned, rusted corrugated metal rooftops, one could see the houses that spanned across the landscape. They reminded me a bit of the red tile rooftops of Italy, arranged in a poetic haphazard and organic manner. The decorative masonry prevalent also reminded me of Italian decoration. I had read that Italians came to this area in Africa in the 11th century and had introduced lost wax casting to the Benin people. Maybe that was in my mind as I gazed out over the African villages that seemed medieval in their appearance. The buildings were interspersed with large boulders to accentuate the beauty, and up on the rocks we took photos and selfies to better remember our time together and to share this special place that was like a reward for our work together.

The last few days also consisted of a few public receptions for our work. Friday’s reception included a representative from the Public Affairs Office at the US Consulate in Lagos (the Embassy is in Abuja, the capital). On Saturday we had another reception — a more formal affair to honor the parents, students and artists in a presentation of certificates and honors. The children had prepared a variety of performances for this occasion, which included music, poetry, dance and other short skits for the enjoyment of the attendees to our humble celebration. UR4Africa also gave out hats, shirts and bags to the artist participants to commemorate our project together. In addition, Cole and I were gifted beautiful handmade traditional clothing made by one of the mentors, Abraham, whose focus is fashion design and had his own line of clothing. 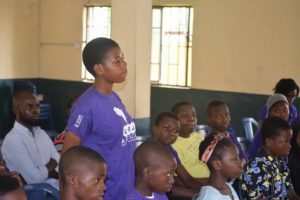 It was our last day in Lagos and we moved from the reception to the airport with our bags packed to begin our journey back to the states. The trip went pretty smoothly — I had a window seat, which made my flight very enjoyable.

Everything went smoothly — except for the fact that I somehow (stupidly) lost my passport. I noticed that it was missing at the Frankfort airport, which actually made me panic inside. I had to keep my cool at the service desk and wait for the folks at Lufthansa to do their very thorough work. Somehow, it finally resurfaced — and when it did I took a deep breath and was off again to traverse the skies.

It was an amazing two weeks; I think we all learned a lot from each other during our short time together and I am always excited for the opportunity to work on such a project. It makes the world smaller and promotes understanding, compassion and sharing — which is what the people of this world need most.