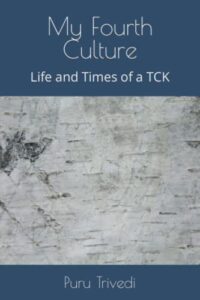 This post was written by Puru Trivedi, Meridian’s Vice President of External and Corporate Affairs. This excerpt is from Trivedi’s book, “My Fourth Culture,” available for purchase here.

“My Fourth Culture” is a look at the lives of ‘Third Culture’ children, with specific focus on the forces that shaped the author into the person he is today. Third culture kids (TCK)—children of parents who grow up outside of their passport country—have unique issues with identity. Emphasis of the thesis is on the modern TCK and addressing the impact of technology, cultural complexity, transitions and inclusion. The author takes a look at his mother’s life and the lives of his grandparents, as well as a deep-dive into his journey towards finding his own, personal ‘fourth culture’ as an adult.

I do not know why some people hold onto their culture, and some people abandon it completely. I do not know if this holds you back or takes you further. There could be a sweet spot between retention and abandonment. It is impossible to say. There is simply too much data on the subject that cannot be analyzed. From my own perspective, though, it is about balance. It is about finding the middle ground between your upbringing and your adult life.

Is it even fair to talk about these CEOs as an example of a wider cultural shift? For example, we might treat immigration differently depending on the skill level of their labor. CEOs, highly educated and trained people, bring very real and tangible benefits to the economy and the country. You can see that Sundar Pichai has led Google to release products that improves the working and personal lives of Americans every single day. So, it is easy to assess the benefits of his arrival on American shores.

However, is the contribution of Indian American workers on the frontlines of industry any less significant to those in head office? The Indian Americans who work at the meat processing factory, or the supermarket, or in a taxi are providing benefit to the American economy just as much as the few at the top driving innovation and growth. It is important that we appreciate both. That is not always necessarily the case.

Of course, my arguments and discussion here are India-centric. That is because it is the example that I am most familiar with, being Indian American myself. I also think the concept of the Model Minority applies more to South and East Asian immigrants more than anybody else. That said, there is an issue of perception around immigrants everywhere. There is an idea of the Good Immigrant vs The Bad Immigrant. These arguments are often backed up with very specific examples which are of no consequence to the overall picture of immigration.

When we look further into real-world examples of cultures crossing over, we begin to see that they are everywhere. K-Pop and Chinese hip-hop have become mainstream in their own countries and over the globe. Hip-hop has come a long way from its roots in America, and its exportation around the world has allowed it to evolve and morph into something new.

We can see the localization of American cultural exports. Exported cultural items are forcing the collapse of language barriers. This is not just in the English-speaking world. There are stories of Japanese families living in Ethiopia. These cultures could not be any further apart or any more removed from one another. Nevertheless, people are still able to survive and communicate. The lack of common ground is not an issue as long as relations are approached from a place of understanding.

India has undergone its own American-style program of cultural exportation. While I do not want to talk too much about Bollywood, this has certainly had an effect. Even more so than America, India has become a cultural powerhouse in Asia and Africa. There are genuine real-world consequences for this.

For example, a lot of African cultures rely on a caste system. Whole books have been written on the benefits and sometimes brutal drawbacks of these systems. I am not here to discuss this in great depth and perhaps I lack the technical expertise to do so.

What I will say is that India has the ability to culturally connect with Africa more easily than America does. It is not that common ground is needed. We can see that in the relations between Ethiopians and Japanese that I have described. However, the ease of cultural assimilation grows with the common ground that is there. India’s caste system allows an uncomplicated cultural exchange with Africa.

As time moves on, India grows in influence in these areas. China has a similar grip in Southeast Asia. Some might see this real-world shift in culture as the establishment of Nineteen-Eighty-Four-style superblocks. I take a less pessimistic view that cultural exchanges are for our benefit.