I’m participating in the Mural Arts Exchange Program through the U.S. Department of State’s Bureau of Educational and Cultural Affairs, currently traveling throughout Nicaragua to meet with youth and other community groups from five different cities. In each location, we’ll be creating murals together. As of now, we’ve completed three and have two more to go. Here’s a recap of the first mural, in El Viejo.

My first two weeks in Nicaragua so far have been very busy. I conducted some workshops that produced two huge murals and very wonderful experiences for all involved. I was impressed by the excited anticipation of the workshops and celebratory dedications upon the completion of both murals in El Viejo and León, two disparate communities here in Nicaragua. The first was in a town called El Viejo, close to the city of Chinandega. El Viejo is near the border of Honduras and in the shadow of the still-smoking volcano, San Cristobal.

The site chosen for this mural was adjacent to the local community center and only a few blocks from a colegio where we held the workshop with participating youth. The workshop, which instructed the youth on how to create drawings in preparation for the final sketch of the mural, elicited ideas about the community – elements both enabling and challenging, and positive and negative aspects that could be explored in the wall painting.

My intention for these kinds of projects is to make the maximum visual impact possible, while at the same time engage the participants in a meaningful and lasting manner. Near the end of the workshop, we gathered the drawings, which I incorporated into a final piece. 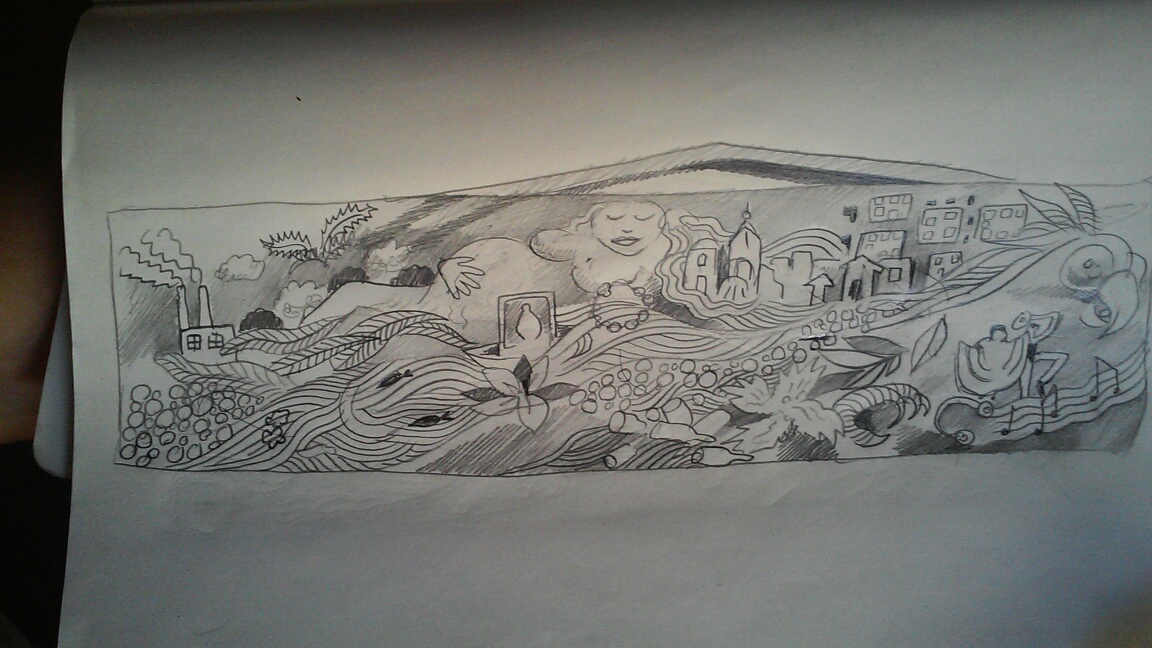 Based on their drawings, I made this sketch of a river that is central to their ideas. The mother at the top represents women’s empowerment, and other issues depicted are contamination of the river and natural resources. Education, communication, community, and hope also played a part in the formation of their ideas for this mural. In the middle is the Basilica Menor Inmaculada Concepción de María, a central and important meeting place for the village.

The wall for the mural in El Viejo is situated along a well-traversed road that leads to the larger municipality of Chinandega. The site was well chosen both for its visibility and its significance as part of the social structure of the village of El Viejo. It is on the exterior of the Piscina Olímpica, where a stream of buses full of students, commuters, farmers, and workers, as well as motorcycles, tractors, and all sorts of vehicles pass by continually. It was also a very long wall, and considering the enthusiasm of the group with which I was working, I decided to use a generous portion of the unpainted wall. Before we added our mural, the wall had only a small, fading advertisement, like a postage stamp on an envelope.

For two days, I worked with the participants and Jóvenes por el Diálogo to create the 75 x 18-foot wall painting. As a group, we experienced a lot together – working, drawing, discussing, painting, celebrating, smiling, laughing, and even sharing tears. It was a full couple of days in Chinandega and El Viejo. I look forward to sharing more about the other murals in León, Managua, and Bluefields, and my experience with the U.S. Department of State Exchange Program (we were all excited to see that the El Viejo mural is their new Facebook cover photo).

Follow the rest of Paul’s program by following #muralartsNICA