Welcome to the latest edition of the Meridian Center for Cultural Diplomacy (MCCD)’s Soft Power: The Monthly Roundup. This blog series is compiled each month by MCCD staff and interns.

This month, we are highlighting seven cultural diplomacy projects from around the world.

The Art of Saving a Life, sponsored by the Bill & Melinda Gates Foundation, is an online campaign that has been steadily gaining steam over the past year. The campaign, which promotes vaccination, was launched as part of an international effort to raise funds to inoculate millions, at Gavi, The Vaccine Alliance Conference that was held in Berlin on January 27th.  The Art of Saving a Life is a compilation of stories, as told by more than 30 world-renowned photographers, painters, sculptors, writers, filmmakers, and musicians from 24 countries about the importance of vaccinations. The complete collection of art was unveiled over the course of the month.

2) One Stage for the World

globalFEST, an annual musical festival held in New York City over the past twelve years, aims to remove cultural barriers between countries and to create opportunities for individual artists to collaborate with governments, sponsors, scholars, and critics. Tours and cultural exchanges that result from globalFEST’s showcases have helped build an ever-widening audience for world music, and by extension, an increase in international cooperation and collaboration. This year’s festival was held on January 11th at the Webster Hall. The lineup included artists from Argentina, Belgium, Brazil, Colombia, France, Israel, Kenya, Morocco, Pakistan, Tunisia, the United Kingdom, and the United States.

U.S.-Cuba relations have softened recently, with both countries taking historic steps to allow some travel and tourism. Chef and James Beard Award winner Douglas Rodriguez wants to expose Americans to Cuban cuisine. Rodriguez, who is based in Miami and is the son of Cuban immigrants, had arranged culinary tours for Americans to Cuba before travel restrictions were imposed in 2004. This March, he plans to continue the tradition and lead a weeklong trip across the island nation. Other renowned Miami-based Cuban American chefs Brad Kilgore, Todd Erickson, and Jamie Derosa intend to lead similar excursions to Cuba this summer. All hope to foster the relationship between the two countries while exploring Cuba’s culinary history, as well as experience its art and culture.

4) Emotions Inside/Outside through Art and Masks 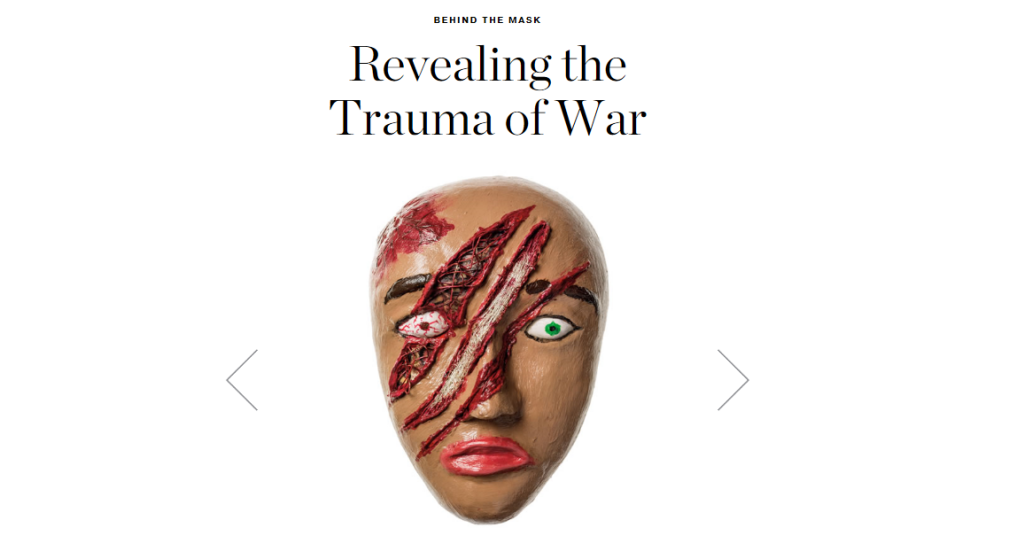 Wars often create their own cultures, making it difficult for many returning soldiers to communicate their experiences with loved ones. Art, however, has the power to transcend these barriers and help individuals heal. Melissa Walker, an art therapist at the National Intrepid Center of Excellence (NICoE) of Walter Reed National Medical Center in Bethesda, Maryland, uses art in her work with service members. Walker has helped these veterans heal from the physical and emotional trauma experienced in the line of duty by recognizing the depth of their feelings, and encourages her patients to access and express their emotions through art by creating facemasks. Her portrait series is arresting and demonstrates the power of art to heal and bring individuals together.

5) Children of Africa Choose the Queens of Africa

While major companies such as American Girl Doll and Mattel are discontinuing lines of their dolls of color in the United States and abroad, Taofick Okoya, a Nigerian entrepreneur, is selling thousands of his Queens of Africa and Naija Princess dolls each month. The Queens of Africa and Naija Princess collections represent Nigeria’s three largest ethnic groups: the Igbo, the Yoruba, and the Hausa. These dolls, which feature traditional traits and clothing from each ethnic group, are meant to empower girls. Okoya came upon the idea to design and manufacture the dolls when he realized that none of his daughter’s dolls looked like her. He came up with this clever solution for Nigerian girls to help promote self-esteem and fight against body image issues.

VILLA is a roving art event that moves from city to city and works with international art galleries to create a temporary, ongoing art community. VILLA Toronto, which took place January 16th-23rd, was presented by Warsaw-based Raster Gallery and Toronto-based Art Metropole. The festival participants included 19 international and local art galleries that showcased works in the Great Hall at Union Station, which exposed over 200,000 commuters in the Canadian metropolis to the art each day. VILLA Toronto brought together renowned artists from all over the world, including Icelandic artist Ragnar Kjartansson, who opened the festival. Other program highlights included artworks by Canadian artists Derek Sullivan and Dean Drever, and Spanish artist Patricia Dauder, talks by German photographer Jochen Lampert and Swiss artist Reto Pulfer, and a screening of French American film maker Babette Mangolte’s documentary, Edward Krasiński’s Studio.

Antonio Gaudí, a Catalan architect known for his modernist and mosaic designs, worked exclusively in Barcelona, Spain, in the early 20th century. Millions of international tourists flock to Barcelona each year to visit his buildings, including La Sagrada Família. What few people know is that in 1922, Gaudí offered to design a chapel for the Franciscan Friar Angelico Aranda in Chile. Gaudí wrote, “This project would serve as a spiritual fellowship between Spain and America.” Almost a century later, the chapel, which will hold the remains of Friar Aranda, will be built just outside of Santiago. Chilean architect Christian Matzner will oversee the project, making it the first Gaudí building constructed outside of Spain. Long after he started on La Sagrada Família – still under construction after 130 years – Gaudi’s gift to the Americas is set to become a reality.