The following blog post is a three-part series adapted from Ambassador Yovanovitch’s Trainor Award lecture, delivered in Gaston Hall at Georgetown University in February 2020 and originally published on the Medium. In the series of blog, she reflects on her career in the Foreign Service, the state of diplomacy today, and the U.S. role in the world.

PART 1: The power of example

I’d like to tell you a little bit about myself and why I decided to become a diplomat. Because it was pretty unlikely, but all American stories are unlikely.
That is the beauty of America.
I grew up in rural Connecticut and had an idyllic childhood. But my parents grew up during World War II in Europe, and their experience of war, deprivation, and loss influenced me — profoundly.
My father was born in Siberia in 1921, grew up in Serbia in Russian émigré circles, was a German POW, and ended up in Paris working as a handyman where he earned his green thumb and learned carpentry and just about every other skill. Those were years of hardship, and he very rarely talked about them.
He eventually emigrated to Canada, where he put himself through university by working at a chocolate factory. (When I was a kid I loved the idea of my father as Willy Wonka, but I think the reality was a little different.) In Canada, my father met my Mom, who had her own amazing backstory. Her father had fled Russia after the Revolution and found refuge in Wiesbaden, Germany. My mother grew up stateless and half-Russian, a precarious existence, as the Nazis took over Germany, and World War II began.
After the war, the family emigrated to London, but their outsider status didn’t change. My Mom continued her westward journey to Canada, where she met my father and where I was born. When my father got a job in the U.S., we moved to bucolic Connecticut — and my exhausted parents didn’t budge for 40 years. Like so many immigrants, they understood what a gift they received when they came to America.
And they brought me up to believe that I needed to give back, to repay that gift. That it didn’t matter that they had been scarred in ways no one in our community could understand — or, for that matter, that I could understand. It didn’t matter that we were living paycheck to paycheck.
What mattered was the future.
My parents were optimists, although they came from Eastern Europe, which — as you may many of you know — is the home of pessimism. They kept on moving until they found each other, and then a place where they could raise their children in safety and with opportunity. It’s a pretty typical post-World War II experience. Probably, a pretty typical story today.
My parents passed on to me an unwavering belief in the idea of America: that all people “are created equal”: that they have “unalienable rights,” including “Life, Liberty and the pursuit of Happiness;” That the U.S. government is “of the people, by the people and for the people.” That was such a powerful concept, almost a prayer, when Lincoln said those words at Gettysburg, when our nation was so divided.
Almost one hundred years later, my parents heard Lincoln’s words. They had lived in countries where the people had to serve the government. So the promise of a government that serves the people meant more to them than to most. But they understood that to keep the promise a reality, everyone had to pitch in. And my parents did just that. They were both high school teachers, and they helped raise generations of students, who continue to be in touch — grateful for their example and influence.
My college experience reinforced everything my parents taught me. Despite the odds, I went to Princeton University on a scholarship, and our motto was “Princeton in the Nation’s Service.” That motto was inculcated in us from day one to graduation. With a purpose. The message was that it did not matter who you were or where you came from, if you were at Princeton, you were privileged and needed to contribute. I’d note the same thing could be said of the students at Georgetown University. Today, Princeton’s motto is “Princeton in the Nation’s Service and in the Service of All Nations.” Tailor-made for me and for many of you.
When I graduated, I took some detours. Detours are good, they teach you stuff.
I worked in three different advertising and marketing firms in Manhattan. I learned that money isn’t really what motivates me. On the day in late 1983 that the U.S. invaded Grenada and none of my co-workers was interested, I knew I needed to find something different. I went back to my high school goal of being a Foreign Service Officer. My thoughts were inchoate but I thought I could somehow contribute to greater security in the world. I loved the study of history and politics. I loved the idea of service, of giving back. And I thought it would be exciting. Interesting people. New cultural experiences. Travel around the world. Great food. I was ready! And I wasn’t disappointed.
I got all of that and more, from Mogadishu to Moscow. 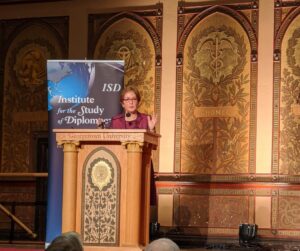 PART 2: From the “long peace” to new challenges

I joined the State Department in 1986.
The world that we knew then was shaped by World War II, the rise of Soviet communism, and the framework that we put in place to manage the challenges. Two lifelong public servants had conceived the key pillars for the post-war order, and did it by counterintuitively rejecting the “to the victor belongs the spoils” mentality that had previously fueled almost constant war in Europe.
In 1946 George F. Kennan, a career Foreign Service Officer, outlined a strategy that would endure nearly 50 years to contain Soviet communism. Then in 1948, a career military officer, George C. Marshall, conceived of a generous peace for the recovery of Europe, much of which had been destroyed. The Marshall Plan financed Europe’s reconstruction, bound us more closely to Europe, and turned enemies into partners.
These innovative measures, along with the establishment of economic and security institutions, created the conditions for the long peace in Europe, now at 75 years and counting. And although the Cold War dominated our foreign policy for the next 40 years, it turned out that the tyranny of communism couldn’t compete with the ideals of democracy and the promise of capitalism. By the end of the last century, Soviet communism collapsed, bringing an end to an era.
Today’s challenge
Thirty years on, though, it doesn’t feel like the end of history, as some had promised. It feels like we now have not just the nation-state challenges of old but also the new challenges of terrorism post-9/11, pandemics, global warming, the disorienting and dangerous effects of disinformation, and the tension between a globalizing world and a trending nativism, to name just a few.
At the same time, our alliances are fraying, new powers are rising, and that creaking sound we all hear is the institutions of the international order under severe strain.
Without doubt, our international institutions need a reboot; what they don’t need is: the boot. We need to reform them, to accommodate the challenges of this time. But the principles on which they were established remain our true north: rule of law, generosity of spirit, an understanding that we are stronger together, and a commitment to put U.S. resources on the line, together with others, to make the world a more democratic, more prosperous, and more secure place.
Clearly this is in the interests of others, but it is first and foremost in our own interests. These are the principles that guaranteed the long peace in Europe after World War II. And I believe they can keep us going for another 70 years. But we need to recommit to first principles, reassure our allies, and send a signal to our adversaries. And no agency is more prepared to take on that mantle than the State Department and its dedicated team of professional diplomats. The quiet work of diplomacy can be more effective and less resource-intensive than just about any other tool in the governmental tool kit.
To achieve this, we need to be engaging with our partners and our peer competitors all the time, not just when it suits us. We need to tend the garden, as President Reagan’s Secretary of State, George Shultz used to say, so that the weeds don’t grow up and choke the garden.
It sounds so old-fashioned in our high-tech world, but diplomacy is about human interaction. Creating relationships of trust is more important than ever. It’s not as exciting as sending in the Marines, but it’s cheaper and usually more effective in the long term. We have outsourced our work to agencies with greater resources and greater political clout in Washington for too long. It’s important to allow the folks with regional expertise, language skills, and relationships to lead in our foreign policy, and to allow other agencies to be able to concentrate on their own important missions. We need to be principled, consistent, and trustworthy.
To be blunt, an amoral, keep ’em guessing foreign policy that substitutes threats, fear, and confusion for trust cannot work for long, especially in our social media savvy, inter-connected world. At some point, the once unthinkable will become the soon inevitable: that our allies, who have as much right to act in their own self-interest as we do, will seek out more reliable partners — partners whose interests might not align well with ours. How one accomplishes the right balance between reforming old institutions and advancing our interests, while respecting our allies and outpacing our adversaries, is the art of diplomacy.