The inaugural W-GDP IVLP participants at Meridian in 2019.


As catalysts, trailblazers and change-makers, women have unquestionably shaped the world we live in today. Next month marks Women’s History Month in the U.S. and Meridian is proud to honor the accomplishments of women in diplomacy around the world through a series of programs, as well as flashbacks to our flagship initiatives that demonstrate Meridian’s commitment to championing the empowerment of women and girls.

On February 24, in partnership with Women Ambassadors Serving America, Meridian hosted over 50 former and current women ambassadors from foreign embassies and the U.S. for “Diplomatic Readiness: What skills will diplomats need in 2030 and beyond?” This program opened with the Director of National Intelligence’s Global Trends report, followed by a panel conversation, moderated by Ambassador Paula Dobriansky, on how women ambassadors across career and political divides can collaborate on how best to equip the next generation of career, political and foreign women ambassadors for the future of diplomacy. Ambassador Dobriansky serves on the Meridian Center for Diplomatic Engagement Advisory Council along with Ambassador Piper Campbell, Co-Chair of Women Ambassadors Serving America, who opened the program on behalf of WASA. Many of the current U.S. ambassadors in attendance were in Washington for the annual U.S. Global Chiefs of Mission Conference. 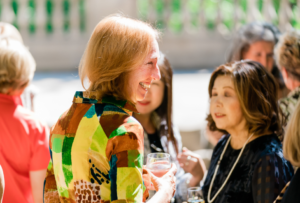 The importance of women’s leadership in diplomacy has both surfaced and manifested as part of Meridian’s Entrée to Dialogue salon dinner series. Among the many foreign ambassadors who have opened their residences for important conversations on timely global matters was Her Excellency Emily Haber, Ambassador of Germany, who hosted a dinner on May 8, 2019, to discuss First Women in Leadership with the Meridian Global Leadership Council. Ambassador Haber and other distinguished speakers highlighted their experiences being one of, if not the only, woman or minority in their respective workplace or field. These stories sparked conversations among dinner guests who shared their perspectives on being the first woman in a position of power, the changing gender expectations across industries and sectors, maintaining a sustainable work–family balance and creating opportunities for women who follow. In the spring, New Zealand Ambassador Rosemary Banks will host the next Entrée to Dialogue salon dinner discussion on the future of space diplomacy and women’s historical contributions to navigating the space and the stars.

Throughout the month of March, Meridian is hosting a series of events and programs that celebrate and honor the achievements of women leaders around the world. On March 2, Meridian will welcome the 2020 International Women of Courage (IWOC) Awardees to our campus for their International Visitor Leadership Program (IVLP) exchange. Now in its 14th year, the annual U.S. Secretary of State’s IWOC Award honors extraordinary women worldwide who have demonstrated exceptional courage and leadership in advocating for peace, justice, human rights, gender equality and women’s empowerment, often at great personal risk. Meridian is proud to once again partner with State’s Bureau of Educational and Cultural Affairs (ECA) to design and implement a two-week professional International Visitor Leadership Program (IVLP) itinerary for the Awardees. After the Washington portion of their itinerary, each of the honorees will travel to different cities around the U.S. to share their stories and hear from other courageous champions of women’s empowerment. 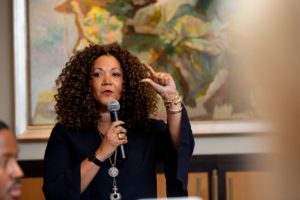 Later in the month, Meridian’s Rising Leaders Council is convening a salon dinner on Paving the Global Path for Gender Equality: Lessons from Two Leading Nations, Iceland and Rwanda. According to the World Economic Forum’s Global Gender Gap Report 2020, we will not see gender parity in our lifetimes, and nor likely will our children. How can we make strides toward worldwide gender parity? What lessons can be learned from leading nations and champions of this global issue? The First Lady of Iceland Eliza Reid and First Lady of Rwanda Jeannette Kagame will guide a conversation, moderated by Meridian’s President Ambassador Stuart Holliday, around these key issues and share perspectives on what their respective countries are doing to help close the gaps in gender equality.

In the months ahead, Meridian will welcome the second cohort of the new International Visitor Leadership Program (IVLP) entitled “W-GDP: Overcoming Barriers to Women’s Economic Participation.” This past September, Meridian partnered with the State Department and USAID on the inaugural project that invited 18 distinguished leaders working on women’s global development and prosperity initiatives around the world to cities across the U.S. to meet with federal, state and local governments, private companies, multilateral and non-governmental organizations, business incubators and financial institutions. This IVLP project focuses on Pillar III of the all-of-government W-GDP initiative, which explores ways to reduce restrictive legal, regulatory and cultural barriers to women’s ability to participate equally in the global economy.

March 3 marks the 100th anniversary of Women’s Suffrage in the United States. Meridian will celebrate this historic moment with an exhibition of select works from the ‘Women Who Dared’ art collection, the largest collection of privately-held art that is exclusively by women and consists of over 330 works by female artists from 7 continents, spanning 2,500 years. There will also be a panel discussion with Sandi Nicholson, Chris Bedford and Shantell Martin moderated by CNN’s Ana Cabrera, followed by a performance by The String Queens, a dynamic trio of women who are school teachers by day and performers by night that create stimulating musical experiences that span musical genres and eras. 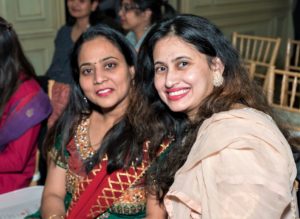 With cultural diplomacy as a central pillar of Meridian’s work, we annually honor the significant work of the Embassy Social Secretaries and Cultural Attachés – many of whom are women – who are behind the scenes running the embassies and entertaining audiences across Washington. Without these embassy leaders, Meridian would not have such strong diplomatic engagement with leaders around the world, which is needed now more than ever to advance international understanding of different people and cultures. Our last celebration of Washington’s social secretaries and cultural attachés welcomed 120 guests to hear from a panel of distinguished speakers spanning the cultural realm in Washington on the importance of culture, hospitality and diplomacy.

Diplomacy can’t exist without the inclusion of women. Meridian is committed to supporting women around the world who are fighting for increased access to world-class opportunities, regardless of gender, and paving a path for the next generation of change-makers by building global networks of champions who stand together in the face of adversity to advance gender equality and prosperity for all. Learn more about Meridian’s women and girls’ empowerment initiatives here.

Meridian is a nonpartisan diplomatic center that strengthens engagement between the U.S. and the world by developing and connecting global leaders through culture and collaboration.