Morocco has been called a cool country with a hot sun; those who visit may also call it a hot country with cool people. Meridian International Center had the opportunity to see the North African nation’s many facets as part of a delegation dispatched to examine the political economic and cultural landscape in Morocco.

Much of Morocco’s dynamism is related to its history as a melting pot of cultures; from Berber to Arab to Jewish to European to African, elements of each culture was incorporated into its evolution as a nation. The country has also managed to weather the negative aspects of the Arab Spring and create space in Morocco for varying points of view.

Our delegation met with government and cultural leaders in Rabat, coming away with a sense that the nation has a strategic view of itself as a bridge between the East, West, North and South. Morocco emphasizes serving as a gateway to Africa for European and American businesses seeking to invest in the rapidly emerging market. Despite concerns over immigration and migration to Europe, serving as a maritime and agricultural link to Europe is essential for Morocco’s prosperity.

We met with the Deputy Foreign Minister (who happens to be an alumnus of the United States international visitor leadership program, sponsored by the State Department) who noted the long-standing relations between our two countries, adding that Morocco was the first country to recognize the United States in 1777. Over that period of time, US-Moroccan relations have been marked by close cooperation — including a free trade agreement, major non-NATO ally status and support of other initiatives in the Middle East.

Our delegation then visited Fez, the intellectual and historical hub of religious thought in the country, that is home to the oldest university in Africa. The innovations in mathematics and astronomy and science emanated from the city until more strict interpretations of religious laws were applied in the 17th century. Once home to a vibrant Jewish community, Morocco has taken great care to restore and preserve this legacy although few members of that community remain most having emigrated to Israel, Europe and the United States in the mid-20th century. While in Fez, we had the opportunity to hear more about the historical interrelationship between Arabs and Berbers, the indigenous people in the Atlas Mountains. Rather than viewing themselves as separate groups, Arab and Berber have intermarried and serve as co-equals in government and society. 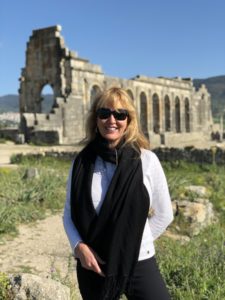 Marrakesh is seen as an exotic place on the edge of the Sahara, and was the first city for many traders and travelers coming from sub-Saharan Africa to the North. It still holds many of the same multicultural aspects it did then, while overlaying a very sophisticated tourism and hospitality industry that has attracted many from around the world.

While we were able to see many beautiful architectural sites, including mosques, riads and gardens, it was the vibrancy of the cultural life that was quite remarkable — with old the and new blending together. Morocco also exists as a reference point for design and craftsmanship that has a universal appeal; the Yves St. Laurent Museum in Marrakesh celebrates the life of a French designer who burst on the scene in the 1960s and 70s. His use of colors, fabrics and patterns from Morocco exemplify his unique approach to fashion.

Meeting with young entrepreneurs, business leaders and civil society activists who participated in the international visitor leadership program is a reminder that while huge progress has been made, this young population will require continual reform and evolution in order to sustain and preserve the stability of the country. This push and pull of modernity has been managed effectively by his Majesty King Mohammed the sixth, but must be rooted through strong institutions and civil society to preserve them for the future.

While Morocco has many income levels, the dignity and pride that all of the country’s people feel in preserving their tradition is apparent throughout the region, and hospitality is an important element of that; even people without many resources will welcome you with everything they have.

Meridian has worked to bring hundreds of leaders to the US from Morocco through its programs and is actively engaged in cultural initiatives to help strengthen ties between our two countries. We look forward to continuing these activities and working with those changemakers who realize that the future of Morocco and the US is important. This relationship allows the our country to have a friend and ally in the Arab world, and allows Morocco to enjoy greater investment, economic opportunity and cooperation in the security sphere.

Winston Churchill introduced Franklin Roosevelt to Morocco in 1942. I hope that we were able to add a small tile in the Mosaic that is the multifaceted relationship between our countries.