With the increased exposure of deep-rooted inequities in our society, there has been a universal call for greater equity, diversity and inclusion in the workplace – and the American diplomatic corps is no exception.

The United States is at an inflection point on the global stage and diplomacy has never been more important than now to revitalize our standing in the world. But to do this, the American diplomatic community must reflect the diversity of our country – our backgrounds, our beliefs and our values. It not only matters from a representation lens but diversity of perspectives shared along people from varied backgrounds leads to better policies.

There are hundreds of bright spots on the horizon and this list only touches on a micro-percentage of the diplomatic field. The 10 diplomats and diplomacy practitioners featured in our list give everyone reason to believe that the future of American diplomacy looks like the rest of America. Selection is based on excellence and leadership; current work in diplomacy or global affairs; and contributions to issues of expertise through thought leadership.

Through the Meridian Center for Diplomatic Engagement we look forward to continuing our work with the current diplomatic community and creating pipelines for the next generation of diplomacy leaders. With more than 60 years of close relationships with the diplomatic corps, Meridian is uniquely positioned to convene dialogues among leaders across borders, parties, and industries to achieve consensus and sustainable, mutually-beneficial solutions. 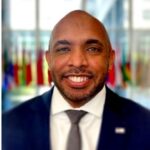 Justin Davis
Foreign Service Officer and Chief of Staff, Bureau of Near Eastern Affairs at the U.S. Department of State

Davis specializes in political negotiations with 12 years of experience at the U.S. Department of State. He has served as the political unit lead at the U.S. Embassy in Havana during the reestablishment of diplomatic relations between the U.S. and Cuba after more than 50 years of limited diplomatic engagement. Additionally, Davis led the State Department’s efforts to resolve Venezuela’s humanitarian crisis drafting the strategy on Venezuela and negotiating with leaders in Latin America and Europe to support the Venezuelan people. He served as a Senior Watch Officer in the State Department Operations Center, State’s 24/7 crisis and emergency response unit, and was on duty during the January 6 riots where he worked to safeguard our domestic democratic institutions. As the Deputy Task Force lead in Doha during Operation Allies Refuge, the largest airlift in history, Davis and his team of 150 federal workers successfully evacuated 70,000 Afghans that came into Doha from Kabul. They stood up an operations center in short order and provided shelter, food, water and supplies to the evacuees and Davis negotiated with the Qatari government to secure safe passage for American citizens stuck in Afghanistan. His next assignment will be at the U.S. Embassy in Lima, Peru to serve as the Counselor for Political Affairs.

Huber has dedicated her career to honoring her Black heritage through international service. At age 16, she accepted a public service award from the Delta Sigma Theta Sorority, and she told the audience that she would pursue her social justice work by moving to Africa. In 2007, she achieved that dream after years of working and traveling to conflict areas across the continent. Huber moved to northern Uganda where she lived and worked alongside local communities recovering from the conflict with the Lord’s Resistance Army. Prior, she represented concerns of communities impacted by conflicts in Africa and the Middle East at the UN Security Council as a Representative for the Quaker UN Office. Huber joined the State Department in 2017 as the Team Lead for Marginalized Populations human rights programming in the Bureau of Democracy, Human Rights and Labor (DRL). Huber has extended her service by founding DRL’s Diversity, Equity, Inclusion and Accessibility (DEIA) Council, which works to improve DRL’s DEIA approach to staffing, enrichment and events. She is a member of the Department-wide Agency Equity Team (AET), an entity tasked to implement the Biden Administration’s Executive Order 13985 on support for racial equity and underserved communities. In her pursuit of equality and justice, Huber has demonstrated that her direct action and service throughout her career are rooted in her heritage and personal principles.

Navarro Moore
Senior Advisor to the Under Secretary for Political Affairs, U.S. Department of State

Moore has over a decade of foreign affairs and national security experience with the State Department in Fiji, Thailand, El Salvador, Australia, Ghana and Washington, DC. He was part of the team that devised a network of third–country evacuation sites during the U.S. Embassy Kabul drawdown and was nominated by the U.S. Secretary of State to receive a Distinguished Honor Award for his work leading an Operations Center team during the 2020 Persian Gulf Crisis. Other signature diplomatic achievements include leading the initial phases of the Department’s response to COVID-19 and coordinating the inaugural U.S.-Kenya Strategic Dialogue. Moore is an avid mentor within the foreign affairs community, an active member of the Pickering and Rangel Fellows Association and the International Career Advancement Program Alumni Association, and a Council on Foreign Relations Term Member. His next post is Deputy Principal Officer in Shanghai following two years of language training.

Jackson is currently the Political-Economic Chief and the Regional Labor Officer at the U.S. Consulate General based in Johannesburg, South Africa. As the Department’s sole Regional Labor Officer, Jackson supports interagency collaboration and information sharing among State Department, the Department of Labor, USAID, and U.S. Missions in nine southern African countries (Botswana, Lesotho, Eswatini, Zimbabwe, Mozambique, Angola, Zambia, Namibia, and South Africa) on labor programming and policy. Before this, he was the State Department’s lead in the Bureau of International Organizations for UNICEF and UN-Habitat. In this role, Jackson was responsible for advancing U.S. strategic goals and policies related to children and urbanization at the UN; identifying opportunities for U.S. leadership and initiatives; and representing the U.S. government in their governing bodies. Jackson also worked at the U.S. Mission to the African Union where he largely focused on youth engagement and supporting multilateral solutions across Africa on issues of democracy and governance. Jackson is a member of the Pickering and Rangel Fellows Association and the International Career Advancement Program Alumni Association. 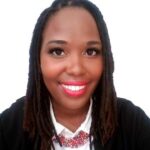 Morgan Limo specializes in program design, management and measurement spanning across many sectors including global health, democracy and governance, education and economic growth. Her work actively measures the effectiveness of foreign assistance, and she is passionate about reducing systemic barriers to inclusive and sustainable development. Limo’s accomplishments have included handling Ebola recovery as the Deputy Program Officer at USAID/Guinea and Sierra Leone; managing the Young African Leaders Initiative (YALI); and helping develop both the Office of Private Capital and Microenterprise at USAID and the Africa and Food Security Congressional Liaisons. She has had assignments throughout Sub-Saharan African in Ghana, Ethiopia, Kenya, Nigeria, South Africa, Tanzania and Uganda. She is a 2015 alumni of the International Career Advancement Program (ICAP) for mid-career international affairs professionals and the Penn Kemble Fellowship at the National Endowment for Democracy. She currently serves as a board member for the Department of Political Science at University of Illinois at Urbana-Champaign, and an Outcomes Director/Board Member at Cross World Africa. 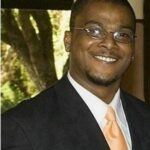 Dr. McLellan is a senior diplomacy and foreign affairs professional and researcher. He holds multiple positions including as a Senior Fellow at the Association of Black American Ambassadors (ABAA) and Senior Associate and Founding Director at Global Ties South Africa. At ABAA, Dr. McLellan oversees The American Ambassadors Project, which is the first comprehensive attempt to compile, organize and report on the lives and contributions of Black Americans who have held the title and rank of U.S. Ambassador. Dr. McLellan has authored several scholarly articles and book chapters about U.S. foreign and diplomatic relations and the legacy of Black U.S. Ambassadors in addition to having developed over 300 knowledge exchange projects for practitioners and students from various countries. He recently completed a two-year assignment as a Senior Advisor to the International Labor Organization’s Office (ILO) for the United States & Canada. Additionally, throughout his career, he has worked or consulted at nonprofit, citizen diplomatic-focused agencies such as Global Ties U.S., FHI 360, the Academy for Educational Development (AED), the Institute of International Education (IIE), and Meridian International Center, all managing U.S. Department of State programs; and at multilateral agencies such as the ILO and the World Bank. 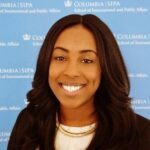 Mwendar-Chaba was inspired to join the Foreign Service to show U.S. diversity to the world. Her upbringing included both U.S. and Kenya identities which provided her with a unique ability to make connections across cultures – an important skill in public diplomacy. Mwendar-Chaba spent her first two years in New Delhi, issuing visas and ensuring the safety of Americans in India. She arrived in Jerusalem in August 2021 for her second appointment at the U.S. Embassy in Israel where she works closely with Palestinian communities in the West Bank, Gaza and Jerusalem to connect Americans and Palestinians for meaningful exchange, including through U.S. government-funded grant projects supporting civil society development and capacity building. Mwendar-Chaba began her journey into the U.S. Foreign Service after receiving the competitive Charles B. Rangel International Affairs Graduate Fellowship. While she does not yet have her next assignment, she’d love to one day serve in Kenya where her parents were born.

Gibson is currently pursuing his doctoral degree in International Affairs with a concentration at The Johns Hopkins University’s Paul H. Nitze School of Advanced International Studies. Previously, Gibson was a Public Affairs Officer in the Bureau of Consular Affairs where he serves as a Bureau Spokesperson. There he developed media and communications strategies for U.S. government initiatives and liaised with the press and civil society to promote U.S. foreign policy objectives. During his time at the State Department, Gibson worked on special assignments including leading the interagency review of the UN Declaration on the Rights of Indigenous People, managing rule of law programs in Democratic Republic of Congo, aiding the U.S. response to the 2016 famine in Ethiopia, and supporting U.S. involvement in Asia Pacific Economic Coordination (APEC) forum meetings. He has received Meritorious Honor and Franklin Awards for his work. Gibson is a Term Member at the Council on Foreign Relations and was previous selected as a U.S. State Department Fellow at International Career Advancement Program (ICAP). Previously he served as a Director at Large on the United Nations Association-National Capital Area (UNA-NCA) Board of Directors. 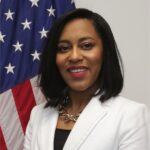 Pollock began her career as a Foreign Service Officer with assignments in Ethiopia, Pakistan, New York, India and Washington, DC. She serves as the Country Information Officer and Spokesperson for the U.S. Embassy in India. Throughout her career, she has led political, economic and public diplomacy engagement strategies across countries from media relations to public affairs. In her current role, she acts as the principal advisor to not only the U.S. Ambassador to India but also over thirty federal government agencies and offices and Washington, D.C. leadership on media strategy to advance U.S. government policy objectives in India. As Assistant Information Officer and Deputy Spokesperson at the U.S. Embassy in Islamabad, Pollock led Embassy efforts to counter misinformation about the U.S. government in Pakistani media, ensuring that the American perspective received equal space in the local press and leveling the information playing field. Through her work with the U.S. Department of State’s New York Foreign Press Center, Pollock produced several media briefings and reporting tours to promote U.S. foreign policy messaging in foreign media including encouraging countries to accept more international refugees and promoting LGBTQ+ rights as human rights.